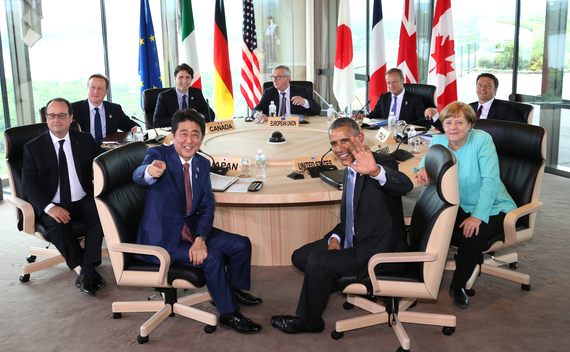 Reducing HFCs, black carbon, and methane can cut rate of warming by half

In their May 27th declaration, the leaders of the G7 committed for the first time to cutting near-term warming by phasing down short-lived super pollutants black carbon, methane, and HFCs.

In a new show of speed, the leaders also committed to fast action to amend the Montreal Protocol to phase down HFCs this year, and to lead efforts to bring the Paris Agreement into force, also this year.

The G7 commitment to reduce the super pollutants has the potential to cut the rate of near-term warming in half.

The G7 commitment represents a major step forward for climate policy by recognizing that speed is critical, including for slowing self-reinforcing feedback mechanisms, where the initial warming feeds upon itself and causes still more warming.

The danger of such feedbacks is illustrated by the unprecedented melting of Arctic sea ice, which is reflecting less and less of the incoming solar energy back to space. The reduction of this white shield has added another quarter as much warming as carbon dioxide since 1979, and much more in the Arctic.

Another dangerous feedback is the northward migration of permafrost, where soils that were once permanently frozen are now melting and releasing methane that causes still more warming.

Cutting HFCs under the Montreal Protocol can provide the equivalent of up to 100 billion tons of carbon dioxide in mitigation by 2050, and avoid up to 0.5C of warming by 2100. HFCs are primarily used as refrigerants.

Parallel improvements in energy efficiency of room air conditioners during the switch away from the HFC refrigerants can double the climate mitigation, according to calculations by Lawrence Berkeley National Laboratory, bringing the total up to 200 billion tons of carbon dioxide equivalent by 2050. This can save enough energy to avoid up to 1,600 medium-size power plants by 2030, and up to 2,500 by 2050.

The G7 leaders also committed to promoting innovation and investment in clean renewable energy and energy efficiency to decarbonize the global economy, to phasing out subsidies for dirty fossil fuels by 2025, to continue mobilizing the $100 billion annual climate fund by 2020, and to achieving carbon neutral growth in aviation from 2020.

The challenge now is to ensure these commitments are kept and implemented globally by all countries.

A good place to start is an agreement to phase down HFCs under the Montreal Protocol this year, which will essentially eliminate warming from one of the six main climate pollutants through a treaty that never fails to do its job.

The White House Fact Sheet on the G7 Summit is here.