By Roberta Rampton and Alexei Anishchuk

U.S. President Barack Obama is expected to use his first face-to-face meeting with Putin in a year to try to persuade the Kremlin chief to bring Assad to the negotiating table to end a conflict in which at least 93,000 people have been killed.

British Prime Minister David Cameron, who is chairing the G8 summit in a remote golf resort in Northern Ireland, conceded there was "a big difference" between the positions of Russia and the West on how to resolve the war.

In some of his most colourful remarks on Syria, Putin described anti-Assad rebels as cannibals who ate human flesh and warned Obama of the dangers of giving guns to such people. Moscow also said it would not permit no-fly zones over to Syria.

For their part, Western leaders have criticised Russia, Syria's most powerful ally, for sending weapons to Assad forces and considering deliveries of a sophisticated missile system.

"How can we allow that Russia continues to deliver arms to the Bashar al-Assad regime when the opposition receives very few and is being massacred?" French President Francois Hollande said.

Stung by recent victories for Assad's forces and their support from Hezbollah guerrillas, the United States said last week it would step up military aid to the rebels including automatic weapons, light mortars and rocket-propelled grenades.

In an apparent response to this development, Assad said Europe would "pay the price" if it delivered arms to rebel forces, saying that would result in the export of terrorism to Europe.

"Terrorists will gain experience in combat and return with extremist ideologies," he said in an advance extract of an interview due to be published in the Frankfurter Allgemeine Zeitung on Tuesday.

Divisions over Syria dominated the atmosphere as global leaders streamed into the heavily guarded resort in Northern Ireland, a place once rocked by decades of violence but which Cameron now wants to showcase as a model of conflict resolution.

Despite the disagreements over Syria, Putin and his Western counterparts appeared cordial in their public appearances. The Kremlin chief cracked a grin as he shook Cameron's hand outside the venue, as police helicopters surveyed the site overhead.

Moscow and Washington both agree that the bloodshed in Syria should stop and say they are genuinely trying to overcome mistrust between them. They had earlier agreed to set up a Syrian peace conference in Geneva but progress has been slow.

The European Union has dropped its arms embargo on Syria, allowing France and Britain to arm the rebels, though Cameron expressed concern about some of Assad's foes.

"Let's be clear - I am as worried as anybody else about elements of the Syrian opposition, who are extremists, who support terrorism and who are a great danger to our world," Cameron said.

Syria aside, Cameron wants to focus on the formal agenda on tax, trade and transparency, dubbed "The Three Ts", topics expected to dominate discussions on Tuesday.

As the summit kicked off on Monday afternoon, the United States and the EU opened negotiations for the world's most ambitious free-trade deal, promising thousands of new jobs and accelerated growth on both sides of the Atlantic.

The spotlight was on Obama and Putin who were due to meet at about 6:30 p.m. (1730 GMT) at the Lough Erne golf resort about 10 km (7 miles) outside the Northern Irish town of Enniskillen, scene of an IRA bomb attack in 1987 that killed 11 people.

Security was tight and the venue was surrounded by a 15-ft high steel fence. Unlike previous summits which have seen often turbulent anti-capitalist protests, the meeting failed to attract any crowds, possibly due to its remote location.

In a speech in Belfast, Obama urged young people in Northern Ireland to finish making "permanent peace" and set an example to other areas of the world stricken by conflict.

Cameron could also face some awkward questions at the G8 table after a Guardian newspaper report that Britain spied on officials taking part in two Group of 20 meetings in 2009.

In a report published just hours before the G8 summit, the daily said some delegates from countries in the Group of 20 - which comprises top economies around the world - used Internet cafes that had been set up by British intelligence agencies to read their emails.

"If these allegations prove to be true, it will be condemned in the strongest fashion and the necessary action taken," said Turkish Finance Minister Mehmet Simsek, who the Guardian said had his calls intercepted by Britain.

The leaders of the United States, Japan, Canada, Russia, Germany, France, Britain and Italy - representing just over half of the $71.7 trillion global economy - will also discuss global economy and trade.

Japanese Prime Minister Shinzo Abe, German Chancellor Angela Merkel and other leaders are likely to say they are not content with progress so far in fixing their economies in the wake of the global financial crisis, according to a draft communique seen by Reuters.

Abe will use the opportunity to explain his blend of fiscal and monetary stimuli known as 'Abenomics' to the leaders as investors try to absorb the implications of a signal by the U.S. Federal Reserve it may start to slow its money-printing. (Additional reporting by Maria Golovnina, William Schomberg, Andrew Osborn, Kate Holton, Jeff Mason and Gernot Heller in Enniskillen, Gabriela Baczynska in Moscow; Writing by Guy Faulconbridge and Maria Golovnina) 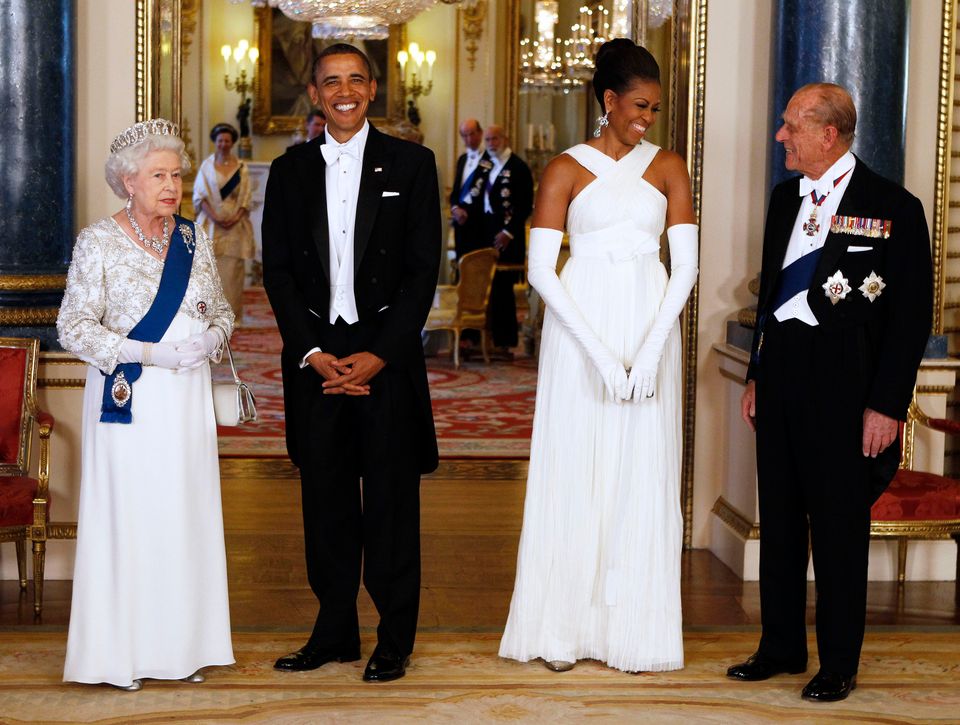 1 / 10
Visiting The Queen
Throughout her reign, Queen Elizabeth has exchanged pleasantries with <a href="http://abcnews.go.com/Politics/OTUS/slideshow/queen-elizabeth-us-presidents-16461860">12 U.S. presidents</a>. Her meeting with the Obamas, however, was exceptionally special. Perhaps that had something to do with the suprise <a href="http://www.msnbc.msn.com/id/30017148/ns/world_news-europe/t/michelle-obama-charms-britain-hugs-queen/#.UPmFiKGLxgI">hug</a> she received from First Lady Michelle Obama. <em>Caption: This May 24, 2011 file photo shows President Barack Obama, second left, and first lady Michelle Obama, with Queen Elizabeth II, left, and Prince Philip, right, prior to a dinner hosted by the queen at Buckingham Palace in London. (AP Photo/Larry Downing, Pool)</em>
AP