Gabriel García Márquez, the leading Spanish language novelist of the 20th century, is dead at 87. He will be honored by fellow writers, intellectuals, academics politicians and, most of all, by his millions of readers worldwide. There was a never-ending romance between Gabo and his readers. A romance that I witnessed repeatedly during the 50 years we were friends.

When I met Gabo, he was not a celebrity. He was known in Colombia more for his work as a journalist than for his novels. In Mexico City, he had only a few but committed readers like Mexican leading novelist Carlos Fuentes, and it was at his "salon" that I met him. In 1964, Fuentes was already at the height of his fame and actress Rita Macedo, then his wife, held an open house on Sundays that was the first stop of foreigners visiting Mexico. People like William Styron, Jack Gelber, Arthur Koppitt, Brigitte Bardot, Jean Moreau, John Gavin, David Rockefeller, Sergio Mendes and K.S. Karol, the journalist who had a passport, issued by United Nations, that made him a Citizen of the World.

At the time, Gabo was still writing One Hundred Years of Solitude, and he and his wife Mercedes were struggling to survive economically. His personality was easy-going, humble, natural; he liked to dance vallenatos in Cartagena and Monterrey, Mexico; hear old Cuban rumbas in La Vitrola, in Cartagena, and sing Mexican rancheras whenever a mariachi was nearby. He also liked to talk about movies and books. Akira Kurosawa was one of his heroes and Marguerite Duras' The Lover, he told me, made him think twice about how he would tell his love story in Love in the Time of Cholera

The amazing success of One Hundred Years made Gabo famous worldwide, but he remained the most un-assuming celebrity in the world. I remember one day I found him walking around Mexico City's Zona Rosa, where we used to hangout in the 60's. When I asked when would we meet in my house, he said he had had so many celebrations he would come any day as long as the invitation did not include a dinner!

I moved to Los Angeles in 1977 and a few years later his son Rodrigo, who is a cinematographer and movie director, also moved to LA to work in Hollywood. Gabo and Mercedes soon added a home in LA to their collection of houses and apartments in Barcelona, Bogotá, Cartagena, Mexico City and Paris. Gabo, Mercedes, Juana and I would meet at least twice a year at a local restaurant usually for lunch "Latin" style, that is as close as possible as 2:00 p.m.

In the early 80's, I got the okay to publish a cultural supplement in La Opinión, the Spanish language newspaper in LA, with a caveat: there was no money to fund it. First thing I did was to call Gabo, Fuentes and Octavio Paz to break the news. I also asked them if they would help me, and the three of them came on board. For two years I was able to publish anything and everything they wrote -- and free of charge.

During one of his trips to LA, Gabo said he wanted to buy a tie, so we went to a shopping mall in Pasadena. He hated ties, and we ended up empty handed but stopped at a bookstore that was selling his books. Looking at the cover of One Hundred Years of Solitude, he noticed it advertised him as the author of Love in the Time on Cholera, with a big smile in his face he told me, "this is the only country in the world that has the dates mixed-up." The first novel was published in 1967, the second 18 years after.

Going out with Gabo in Bogotá, Cartagena, Monterrey or Mexico City meant facing a long legion of readers. In Los Angeles, the mobbing was less intense, but it also happened. One day, we went to a French restaurant in Santa Monica and the waiter was beyond himself when I confirmed it was Gabo whom he was serving. The waiter said he had read a few of his books but not the latest one because he had not found it. Gabo said he would send him one and he did. A few days later, he sent an autographed copy for him and another for his girlfriend. Another day, at another restaurant he disappeared as we were leaving. We found him chatting at the table of a family that had recognized him.

Gabo really liked people and loved and respected his readers. In 1996, the Inter-American Press Association held its annual Assembly in Los Angeles, and Gabo was one of four Nobel Prize winners invited to do a speech -- which turned out to be a memorable one. When he finished the speech, the Los Angeles Times publisher told me he would like to talk to Gabo to invite him for a dinner that night. Diligently, I approached Gabo who was busy signing books to an interminable line of readers. He told me to tell the publisher, my boss, to please wait until the last book was autographed. That took more than an hour!

When a friend dies, you are left with deep pain and a multitude of memories of the moments you shared. After all, as Gabo wrote: 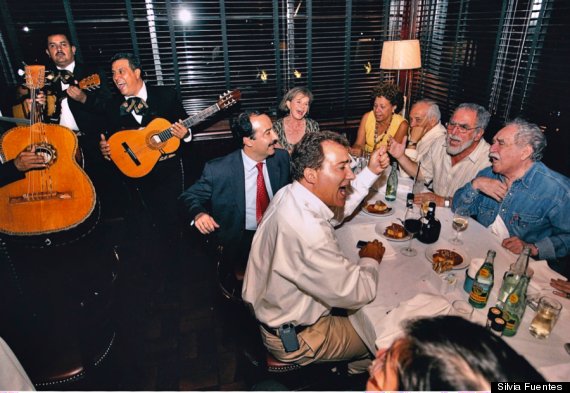 Monterrey, 2009: The author, second from right back row with Garcia-Marquez in blue shirt.