When Gabriel Garcia Marquez accepted the Nobel Prize for Literature in 1982, he referred to himself as one in a long line of "inventors of tales, who will believe anything."

The Colombian author’s work drew on both the corruption he uncovered as a journalist in Latin America and the imaginative tales his grandmother told. His legacy is his ability to take readers along with him and make them believe in anything, too.

Before his death, Garcia Marquez hadn't published anything in a decade. Like his fellow octogenarian and Nobel laureate, the recently-retired Alice Munro, he said writing wore him out, and he wanted more time to enjoy life.

But his enduring body of work, revolutionary for many of us who encountered it as young adults, will continue to move readers for generations to come.

Here are four ways Garcia Marquez’s words and approach to life inspire us:

1. He believed in the enduring power of love. The dedication to Garcia Marquez's most romantic novel, "Love in the Time of Cholera," reads, simply, "To Mercedes, of course."

It refers to Mercedes Barcha, the woman who is now his widow, whom he married in 1958.

The story of lovers who meet in their youth but, as a result of family interference and other factors, do not become a couple until they are elderly, "Love in the Time of Cholera" is based on the courtship of Garcia Marquez's parents. It can either be interpreted as the story of two people whose love survives long periods apart or as the story of a woman who is conned by a lothario over the course of several decades.

Either way, Florentino and Fermina end up together and in love. Cholera says passion need not be dimmed by the passage of years — and that it is such a fundamental part of life that its existence requires an "of course."

2. He reinvented himself. Beginning his career as a reporter and editor for a variety of newspapers, Garcia Marquez wrote fiction for much of his life but did not publish his first full novel until he was 40, after he became disenchanted by journalism and longed for a better way to explore the truth.

That novel was a doozy: "100 Years of Solitude," which most still consider his masterpiece. Many of the subjects he would explore in his novels and novellas came from raw material he collected during his newspaper career — for example, the murder at the center of "Chronicle of a Death Foretold" and the main character of "The Autumn of the Patriarch," exiled Venezuelan dictator Marcos Perez Jimenez.

Turning those true stories into fiction allowed him to, as his translator, Edith Grossman, said, "use fantasy to tell the truth; that is what literature does. It tells the truth through invention and make-believe. The magic comes from encountering a writer of genius who turns everything he touches into gold."

3. He listened to his elders. Garcia Marquez was initially raised by his grandparents, whose influence can be felt in everything he wrote. Although the Nobel Prize winner didn't invent the style of fiction known as "magical realism," which matter-of-factly combines the details of life with fantastical elements of mythology, he is generally considered to be the father of its popularity.

But if he is the father of magical realism, his grandmother, Dona Tranquilina Iguaran Cotes, is its grandmother. The writer credited her stories, which "treated the extraordinary as something perfectly natural," with helping to define his style. In fact, maybe it's tale-spinning grandparents who are the greatest gift to a novelist because Garcia Marquez also said his grandfather, Colonel Nicolás Ricardo Márquez Mejía, was a great storyteller who taught him about the importance of history and politics. And it was his grandparents' house, he said, that provided the setting for One Hundred Years of Solitude.

4. Hollywood messed with him, but it didn't matter. Garcia Marquez's popularity guaranteed that Hollywood would come knocking on his Colombian door, but he may have wished he hadn't answered.

The 1987 "Chronicle of a Death Foretold," starring that great Latin-American actor Rupert Everett, missed the point of Garcia Marquez's riveting tale of suspense, which would have been perfect for Alfred Hitchcock, if he had lived long enough (a decade later, a Broadway version was similarly misguided). And, while star Javier Bardem at least shared a native language with Garcia Marquez, Hollywood's "Love in the Time of Cholera" was similarly misguided.

Fortunately, the books survive awkward attempts to adapt them, and Garcia's enduring gift to Hollywood may actually be his son, Rodrigo Garcia, director of independent films such as "Albert Nobbs," "Things You Can Tell Just By Looking at Her," and the upcoming, magical-realism-influenced "Last Days in the Desert," starring Ewan McGregor.

Chris Hewitt is a movie and theater critic who has written for MSNBC.com, Today.com and The History Channel magazine and whose reviews have run in newspapers across the country

Read more from Next Avenue:
50 books to re-read at 50
Why you'll live longer if you take music lessons
Overcome these 7 barriers to motivation 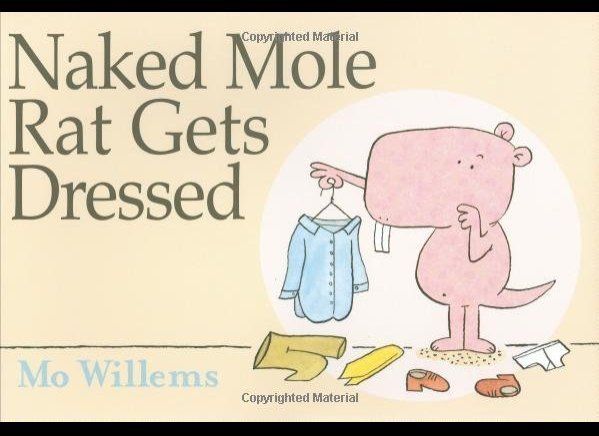 1 / 11
'Naked Mole Rat Gets Dressed' By Mo Willems
Wilbur, a naked mole rat, breaks tradition by donning clothes to the horror of his family and community. Finally the "Grand-pah" settles the matter by donning clothes himself.
Amazon