Gabriel Orozco: Asterisms at the Deutsche Guggenheim in Berlin is the 18th and final exhibition in the museum's commission program.

For this show, Mexican-born artist Gabriel Orozco has created sculptural and photographic installations from the rubble he gathered on two sites in New York and in Baja California, Mexico.

The objects that are displayed on a platform are detritus that Gabriel Orozco gathered at a playing field in New York City. When picking up a boomerang, he noticed the small pieces of rubbish that were lying on the surface of the playing field: rubber bands, labels, coins, and other materials, which he started to collect and categorize. Orozco gave the work the name Astroturf Constellation, referencing the Astroturf of the playing field on Pier 40 in New York. 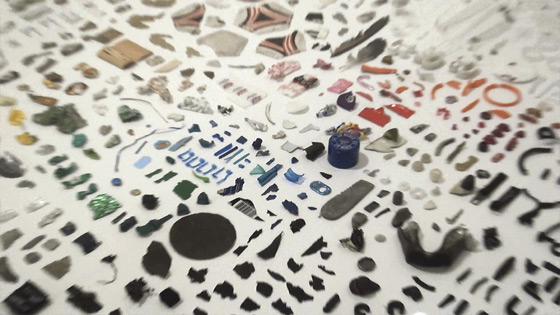 The second installation is entitled Sandstars. The objects that are spread out on the floor of the Deutsche Guggenheim's exhibition space come from a protected coastal biosphere and wildlife reserve in Isla Arena, Mexico. This place is also the endpoint of flows of industrial and commercial waste from across the Pacific Ocean: glass bottles, lightbulbs, hard hats, stones, and other materials are carefully arranged in the image below. Gabriel Orozco has been there before. From the sands of the wildlife reserve he extracted the whale skeleton that formed the sculpture Mobile Matrix (2006). Sandstars consists of 1,200 objects that now form a monumental sculptural carpet on the gallery floor. 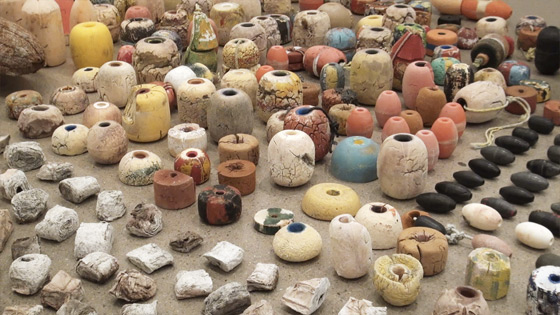 Large-scale gridded photographs of images of the individual objects accompany the sculptural work. Gabriel Orozco photographed the objects under natural lighting conditions in his studio and then arranged them according to their material, color, size, etc. 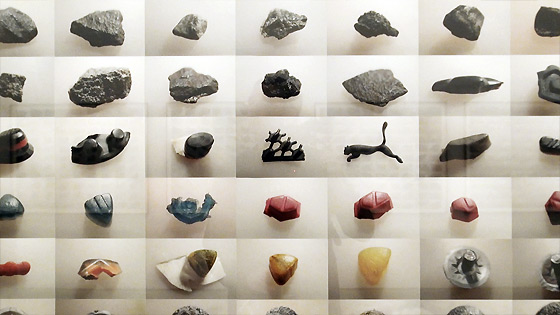 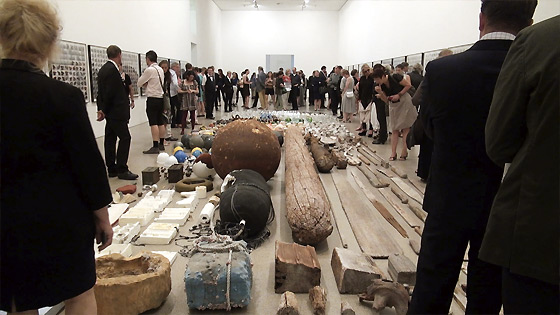 Gabriel Orozco: Asterisms is curated by Nancy Spector (Deputy Director of the Solomon R. Guggenheim Foundation and Museum) and Joan Young (Director, Curatorial Affairs, Solomon R. Guggenheim Museum). The above video provides you with a tour of the exhibition during the press preview, an introduction to the exhibition by Joan Young, and some atmospheric shots of the opening reception.