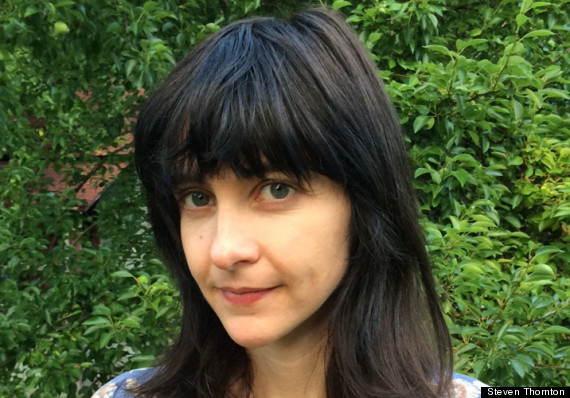 What is one of the country's best visual storytellers worried about? Meeting you.

Gabrielle Bell, the acclaimed cartoonist whom the New Yorker dubbed "a master of the exquisite detail," is nervous about you seeing her studio. ("I'm starting to hoard things," she says.) She's nervous about giving a bad interview. She's nervous that she's too nervous. She apologizes before the tape recorder clicks on.

“I’m always standing on ceremony, waiting to be alone again,” Bell writes in her latest book, Truth Is Fragmentary, available in bookstores this month.

Bell's raw and revealing cartoons investigate life from the perspective of an aspiring recluse. Her most recent effort is a compilation of "diary" comics, in which the Brooklyn cartoonist chronicles the trials and tribulations of her daily life, as well as travelogues from her international trips. 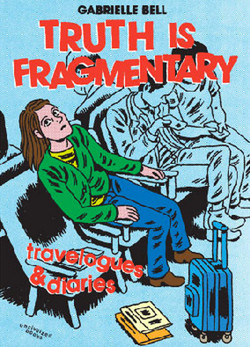 Her work resides in the minutia of life –- standing in line at the post office, getting the plumbing fixed, deciding on a new haircut, losing the keys. But those tiny moments rise in significance when they are imbued with Bell’s sincere musing over what it means to be human.

How does one reconcile the desire to be alone while simultaneously craving companionship? Throughout her book, Bell is pulled in opposite directions -- to connect with others and to retreat.

“People! They are so annoying, yammering away with their opinions and feelings and anecdotes and advice. I sit and wait for them to go away, and even after they do their voices continue to yammer in my head,” she writes. “All the little things they say, they sting and bite and wear you down. I‘d rather be eaten alive by insects.”

While that sounds gloomy, don't be fooled: Bell's work is bursting with heart. Her keen eye for detail and empathetic, introspective voice results in comics that are joyful, unexpected and often refreshingly hilarious.

Bell's last book, The Voyeurs, was hailed as the best graphic memoir of 2012 by the Atlantic Wire. Her work has been selected for the 2007, 2009, 2010 and 2011 Best American Comics and she's been published in McSweeney's, Bookforum, The Believer and Vice Magazine.

The Huffington Post got a chance to interview Bell about her latest book. The transcript has been edited for clarity and space.

When did you start drawing?
Like any little kid, I always drew. I remember going into a trance when I was coloring. Like you just put some paper and pens in front of me and I’d just uuuuuuhh, zone out. I remember there was this coloring contest. I had just randomly colored this picture -- it was this weird psychedelic frog -- and I won the top prize. The kid next to me was mad, and she goes, "You didn’t even get the colors right!" and I think I had this moment then when I was like, "Huh, I guess I’m kind of talented."

I really wanted to be a writer when I was young. But cartooning is pretty exciting too. It sideswiped me. I used to write and not draw, but it’s so much more effective with drawing that I just lost the habit of writing, and now the act of writing really seems daunting. When I try to imagine or create a story, it’s always with pictures. 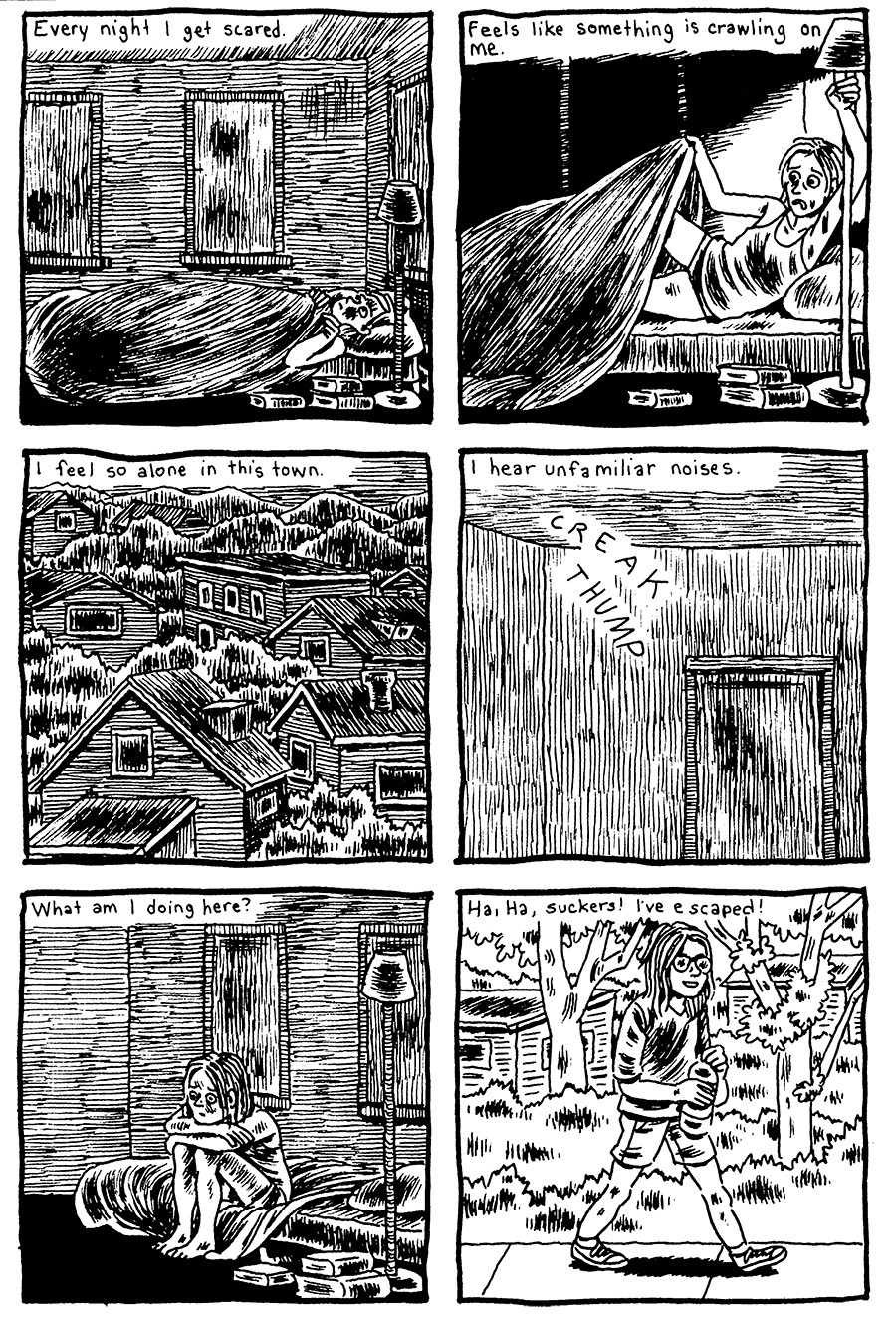 Tell me about your diary comics. What is the purpose of recording everything in the diary comics?
I used to always keep a personal comic journal. But doing comics takes so long, I’d end up doing a diary all day long, it was so compulsive, and I’d had to get in so many details, so I started publishing it just to feel like I wasn’t wasting all my time.

I used them to work through things, to try to find meaning in things. Life is so chaotic, so you try to create some system. I have to admit that these diaries that I’ve published are all about my basic coping with being alive.

Can you talk a little bit about being a female cartoonist?
I think there is a big prejudice against female autobiography. There was a man who interviewed me recently, and I could tell he saw me as "just a woman doing autobiography." Whereas with a man, they do autobiography and it’s considered art or being great and interesting.

Men and women have to deal with different roles that are imposed on them that they may not want. Men have to deal with the man role, being seen as "the protector," the one that takes charge. Women have this responsibility to look really hot all the time. We have to think about clothes and shoes and all these little things that are considered really trivial, but actually it’s compulsory to have to think about that.

Then when we talk about it, it’s not actually shallow, it’s just survival. But if you were to write a book about it, it would be shelved as women’s concerns. In fact, it’s survival concerns.

The interviewer I mentioned … Apparently, he saw all these great men cartoonists standing together -- Chris Ware, Seth, Adrian Tomine, Dan Clowes -- and he said it was like Mount Rushmore. He saw all these other cartoonists in the room and he was like "Why don’t they appreciate what greatness there is here?!"

There’s definitely this male culture of comics, this white male mentality. There are some great women cartoonists of that Mount Rushmore generation. Julie Doucet, she really belongs in Mount Rushmore. And Lynda Barry. And Carol Tyler. But somehow, just the fact that they’re women, they’re not in it. 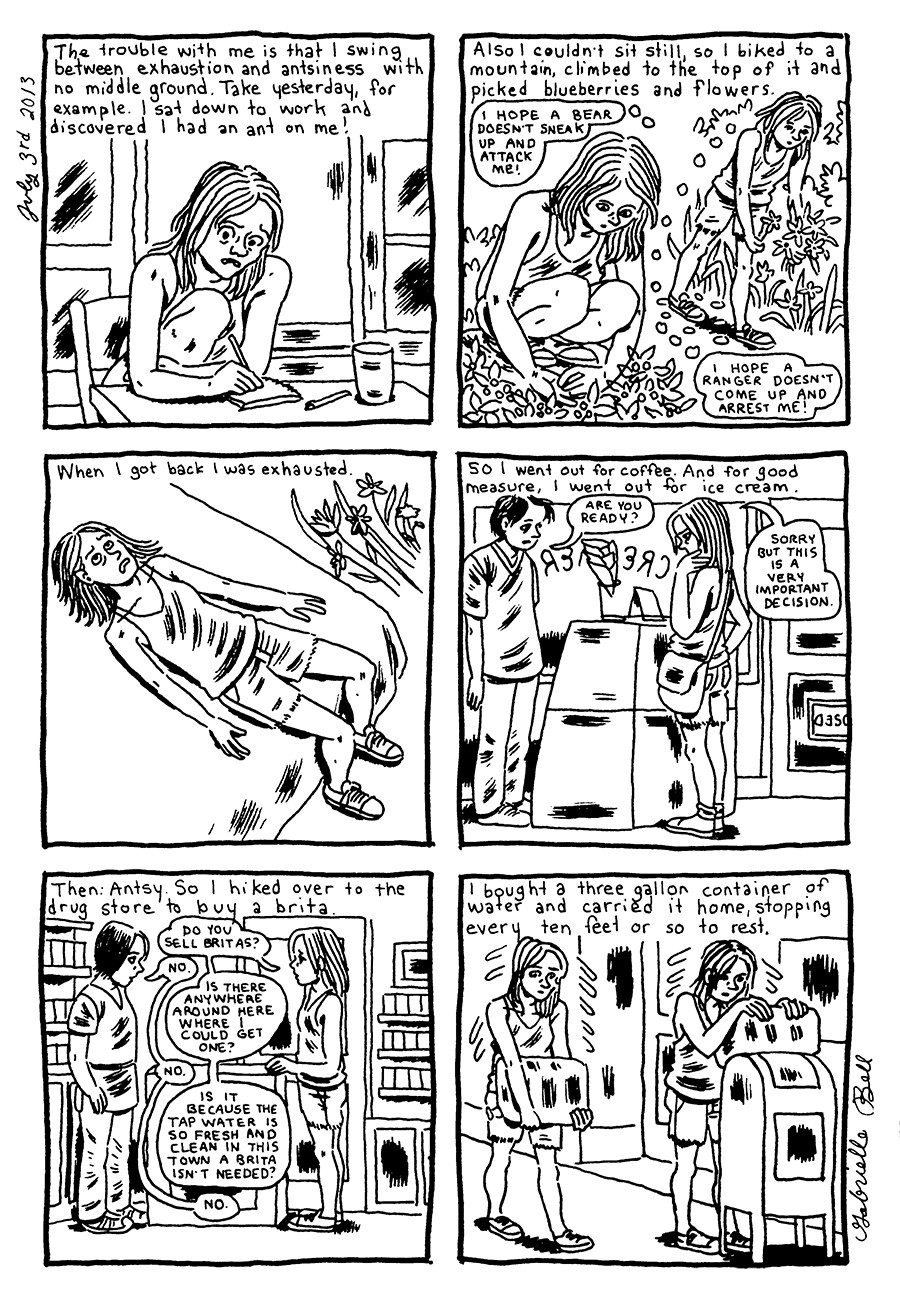 Can you tell me about how you made it on the Internet?
I don’t think I would have had the luck or success, the means to survive, without the Internet. I started my blog after Drawn and Quarterly discontinued my comic series. It was really good that they ended the comic series. It increased my readership.

The Internet is such an important tool for introverted artists. I don’t think I would have done so well in the printed world, in the '90s. On my blog, I would sell watercolor portraits for like $30 just to get by. I would sell original pages. It was a good chunk of money. And I didn’t have to see anybody.

I was lucky that I got to do comics for a living. I haven’t had to have a day job in nearly 10 years. Day jobs were hard for me. It was the exposure, having to be in the same room as other people for a long day, every day. That was painful for me. The work itself was fine. It was just being around all those people. "Hello, good morning." Again, we’re saying hello and good morning? Now we’re saying goodbye? And small talk, oh my God.

Is there anything you regret drawing?
I did this comic where I was working for this woman as an artist assistant. In reality, she was paying me to collaborate with her. I turned it into a story where she got rich and famous exploiting me. It was all just a story, but I felt really guilty about it later. I was making her look like a horrible person, even though she was a really nice person, who had given me a job!

When I’m writing a story, I’m not really thinking about the other person. It's not until I'm just about to publish that I’m like, "What is this person going to think?" It fills me with anxiety. Eventually I ran into this woman and I apologized to her. She said, "I understand how fiction works, you weren’t writing about me." And I was like "Oh! I didn’t do anything wrong." I’m not sure if everyone understands that.

I try to show people in the best light in my comics. I feel, in a way, that I am too nice. I always try to make people look so good. Really good artists, they don’t worry about making people look good, they’ll make people look grotesque, if that’s how it comes out. I’m so afraid of offending people, and I very much want to please people. I work so hard to make people look as good as they possibly can. And not just to make them look good but to look for the good in them, or to find their best side.

Wouldn’t a great artist not worry about that and try to see as objectively or as clearly as they can? Maybe I’m just white-washing everything, maybe I need to be more eviscerating.

I made a decision not to do the diary comics anymore. My last two books were diary comics, but it's not really what I set out to do. They were more my compulsion. I was just trying to turn this addiction into something productive.

I’m less of an exhibitionist now. I’m more private. I guess I needed to expose myself to the world. If I could expose myself, then I would have nothing to be guilty about or to hide. I needed to open myself up and be like, "Here I am, this is what I do, and if you want to read it, you can, and if you don’t, you don’t have to."