WASHINGTON -- Seven months after she was shot in the head by a gunman in Tucson, Ariz., Rep. Gabrielle Giffords (D-Ariz.) made a surprise and emotional return to the House floor on Monday, casting a vote in favor of a bill to raise the nation's debt ceiling.

Giffords entered the chamber to sustained, standing applause, shaking hands with colleagues whom she had not seen since that January day. Her vote, a sideshow to the far more important and compelling personal drama, was in favor of the bill, which passed through the chamber by a margin of 269 to 161.

“I have closely followed the debate over our debt ceiling and have been deeply disappointed at what’s going on in Washington,” Giffords said, in a statement from her office. “After weeks of failed debate in Washington, I was pleased to see a solution to this crisis emerge. I strongly believe that crossing the aisle for the good of the American people is more important than party politics. I had to be here for this vote. I could not take the chance that my absence could crash our economy.”

Giffords' office tweeted word of her return to Washington after the vote had begun. And as she showed up on the floor -- smiling and with her hair cut short -- the attention of lawmakers drifted from the vote tally to her presence. Her office, in a statement, noted that in December 2009 and again in February 2010, she had objected to raising the nation's debt limit. This vote, the statement added, "was substantially different, with the strength of the U.S. economy hanging in the balance."

After the vote was cast, Giffords received multiple additional rounds of applause, as House Minority Leader Nancy Pelosi (D-Calif.) called her "the personification of courage."

"Her presence here in the chamber as well as her service throughout her career in Congress, brings honor to this chamber," Pelosi said. "Thank you, Gabby."

Pelosi said she knew a Giffords visit "was possible" for a couple of days, but she urged the Arizona Democrat not to come unless she felt up for it.

"I did not encourage her to," Pelosi told reporters. "I told her first things first. But she was very eager to come."

Pelosi said she found out for sure that Giffords was returning from her chief of staff, John Lawrence, who is close with Giffords' husband Mark Kelly. When she saw Giffords come in, she said no words were exchanged as they greeted each other. Just "girl hugs," Pelosi said.

"Suffice it to say, it was one of the most thrilling moments to see this heroine return home, to the House. And to do so at such a dramatic time."

Rep. Debbie Wasserman Schultz (D-Fla.), one of Giffords' closest personal friends and one of the people who escorted Giffords into the chamber, said she was beside herself when she heard the House erupt into cheers as Giffords walked in for the first time since the January 8 shooting.

"The reaction in the chamber was the most enthusiastic, exuberant, exhilarating -- I mean we were all crying -- thrilled -- you know, we just knew she would make a triumphant return," Wasserman Schultz said, becoming visibly upset.

"It always felt like there were so many doubters and skeptics, but never doubt Gabby Giffords' determination. This is the first of many votes she's going to pass."

Wasserman Schultz, who is also the Democratic National Committee chairwoman, said she knew "sometime yesterday" that Giffords' visit was happening. She said she spoke late last night to Giffords' husband, Mark Kelly, about the plan. Giffords had been following the debt limit vote from Tucson and "was ready to come and do the pivotal vote if she needed to," Wasserman Schultz said.

"At the end of the day, it was probably the most important vote we're going to cast this Congress. She wanted to make sure that her constituents were represented."

Vice President Joe Biden came to the Capitol to see Giffords, after being tipped off by Pelosi that she would be in attendance.

"I told her she was now a member of the cracked-head club like me, with two craniotomies," Biden told reporters. "You know what I mean? It was just so good to see her. But that's a private conversation."

Speaker of the House John Boehner (R-Ohio) found out about her return about an hour before the vote and helped to escort her into the chamber.

Assistant Democratic Leader James Clyburn (D-S.C.) said he found out that Giffords would show for the vote when he saw her, hinting that Pelosi and others in the know played it close to the vest.

Below, a picture of the congresswoman on Capitol Hill from HuffPost's Jen Bendery: 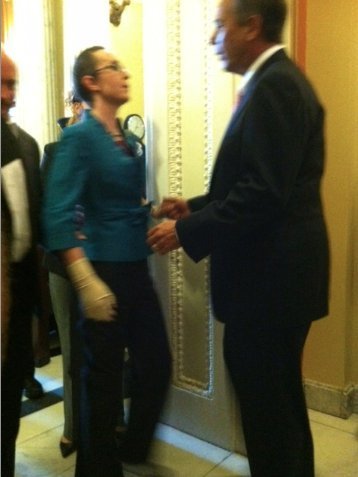 Below, two additional photos via C-Span: 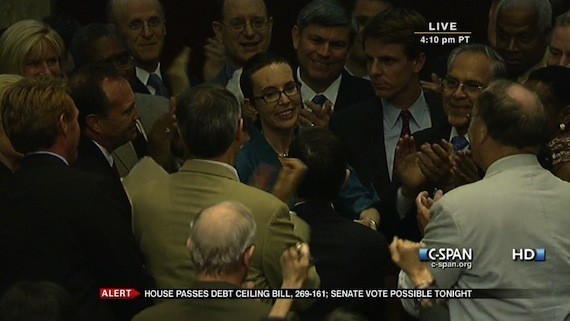 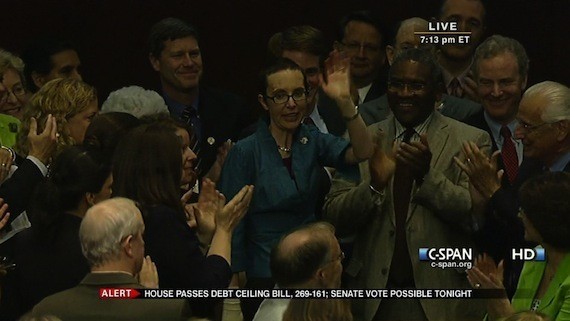 This is a developing story. More details to follow.