Americans for Responsible Gun Solutions -- an anti-gun violence super PAC recently created by Giffords and her husband, former astronaut Mark Kelly -- later posted a photo to Facebook showing the handwritten note that the former congresswoman had used. According to the Washington Post, the words were written by Giffords' speech therapist. 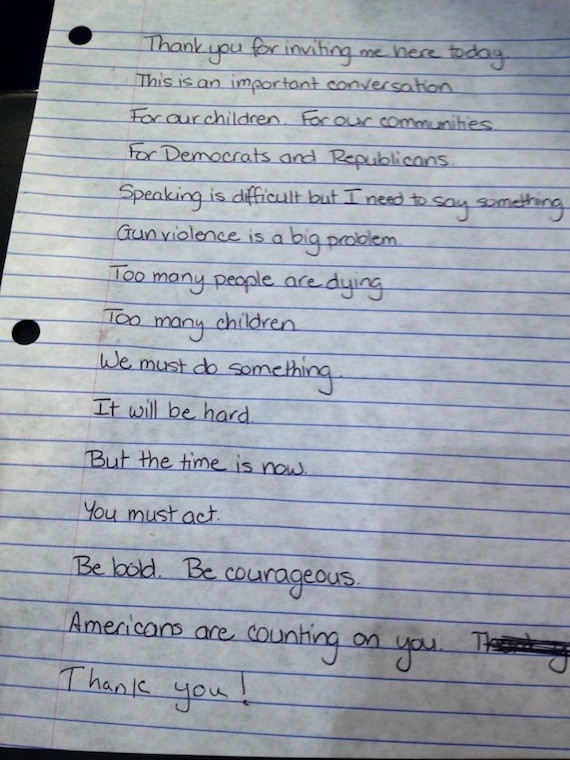 Rep. Debbie Wasserman Schultz (D-Fla.), a close friend to Giffords, told CNN Wednesday that it still takes "a tremendous amount of rehearsal and practice" for Giffords to speak even a few sentences as she continues to recover from the gunshot to the head she suffered over two year ago.

"What she did today was remarkable," Wasserman Schultz said. "You could hear the emotion and the power behind the statement she was making because she feels so strongly about this."

WASHINGTON — She uttered just 80 halting words. But her presence was powerful.

Former Rep. Gabrielle Giffords, shot in the head by a Tucson gunman in 2011, opened the Senate Judiciary Committee's hearing on gun violence in dramatic fashion Wednesday.

"OK," she began, steeling herself before a packed yet hushed committee room.

"Speaking is difficult," she continued, pronouncing each syllable with deliberation.

This former congresswoman, once blessed with a politician's easy gift of gab, spoke in a high pitch, her voice almost childlike.

"It will be hard, but the time is now. You must act. Be bold, be courageous, Americans are counting on you."

Giffords, her every movement labored, punctuated her conclusion by raising a clenched fist to her chest.

And that was it.

Her husband, former astronaut Mark Kelly, gently guided her from the table, then returned to fill out the picture.

"Gabby's gift for speech is a distant memory," Kelly said. "She struggles to walk and she is partially blind. And a year ago, she left a job she loves, serving the people of Arizona."

Giffords' appearance at the witness table offered rare insight into her condition. Her family has closely guarded her privacy and the details of her impairment.

Democratic Rep. Debbie Wasserman Schultz of Florida told CNN it takes her good friend "a tremendous amount of rehearsal and practice" to utter even a few sentences.

"What she did today was remarkable," Wasserman Schultz said. "You could hear the emotion and the power behind the statement she was making because she feels so strongly about this."

White House spokesman Jay Carney said President Barack Obama was looking forward to seeing Giffords and Kelly later Wednesday, and that everyone at the White House was heartened by her appearance on Capitol Hill.

Giffords has made only a few public appearances and interviews since the January 2011 shooting, including reciting the Pledge of Allegiance at the Democratic National Convention and casting a single vote in August 2011 on legislation to raise the federal debt limit.

She resigned her seat in Congress a year ago to focus on her recovery. Giffords and Kelly, both gun owners, have formed a political action group called Americans for Responsible Solutions, aimed at promoting gun restrictions.

Gun control is an issue that really hasn't been debated in Congress for more than 10 years. It rarely gets an airing and engenders strong emotions.

And so it was that both sides did their all to ensure maximum impact from Wednesday's hearing.

Giffords was clearly happy to do her part.