WASHINGTON -- In an extremely moving moment on the House floor, Rep. Gabrielle Giffords (D-Ariz.) submitted her resignation to House Speaker John Boehner (R-Ohio) Wednesday morning after making the announcement in a video Sunday.

House Minority Leader Nancy Pelosi (D-Calif.) began the process by asking unanimous consent to speak out of order. She then praised Giffords, calling her "the brightest star this congress has ever seen."

"Your legacy in this congress and your leadership in our nation will certainly endure," she said.

House Majority Leader Eric Cantor (R-Va.) then paid tribute to her. He said the House is "inspired, hopeful and blessed" for the "outstanding progress" Giffords has made in recovery.

Senate Minority Whip Steny Hoyer (D-Md.) praised Giffords. "She has become an example for us ... for indeed all the world. Of courage. Of clarity of purpose. Of grace."

"Gabby, we love you. We have missed you," he said.

Pelosi and Cantor also paid tribute to Giffords' Chief of Staff Pia Carusone, who took over her office following the assassination attempt against her last January that killed six, left 12 others wounded and the congresswoman recovering from a bullet wound to the head.

Rep. Debbie Wasserman Schultz (D-Fla.), Giffords' closest friend in the House, then asked her colleagues to join her in the House well.

"I couldn't prepare anything this morning because I knew I wouldn't be able to hold it together very long," she said, crying. "We have all been through such a tumultuous year."

She then proceeded to read Giffords' resignation letter.

"Always I fought for what I thought was right. But never did I question the character of those with who, I disagreed. Never did I let pass an opportunity to join hands with someone just because he or she held different ideals," Giffords states in the letter.

"I don't remember much from that terrible day, but I have never forgotten my constituents, my colleagues or the millions of Americans with whom I share great hopes for this nation."

"I have given all of myself to being able to walk back onto the House floor this year to represent Arizona's 8th Congressional District. However, today I know that now is not the time. I have more work to do on my recovery before I can again serve in elected office."

"Every day I am working hard. I will recover and will return and we will work together again for Arizona and for all Americans," closes the letter.

Giffords' letter will be delivered to Arizona Gov. Jan Brewer (R) Thursday, who will determine the dates for the special primary and special election to fill Giffords' seat for the remainder of her 2012 term.

Giffords then walked up to the Speaker's chair to hand Boehner her letter. She stumbled briefly, stood back up, stepped up and took Boehner's hand, at which point he lost it. She submitted her letter of resignation effective at the end of the day to Boehner, who burst out crying, as many members in the House chamber already were. The two clasped hands as her colleagues gave her a thunderous standing ovation.

The House then voted on her her final piece of legislation: a bill that would impose tougher new penalties on smugglers who use ultralight low-flying aircraft to bring drugs across the Mexican border to evade radar detection.

She cast her last vote. 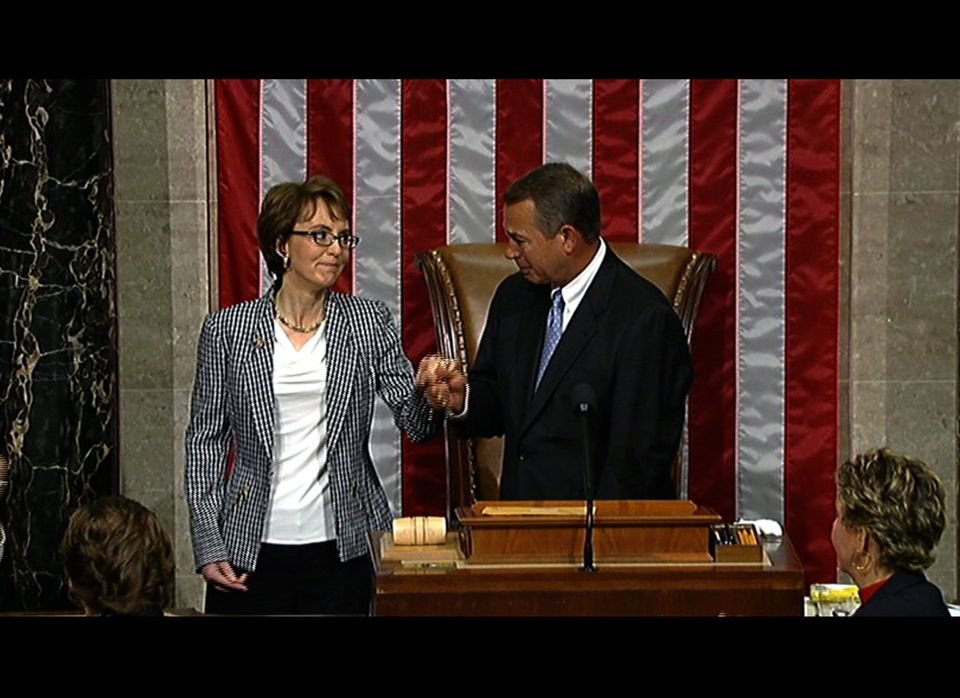 1 / 4
This video image provided by House Television shows Rep. Gabrielle Giffords, D-Ariz. and House Speaker John Boehner of Ohio, on the floor of the House on Capitol Hill in Washington, Wednesday, Jan. 25, 2012. Giffords resigned from the House on Wednesday amid tears, tributes and standing ovations, more than a year after she was gravely wounded by a would-be assassin.
AP