The beach's tannest and most enviable couple -- pro-volleyball player Gabrielle Reece and surfing superstar Laird Hamilton -- have been married for 17 years. They have two daughters together and one teenage daughter from Laird's first marriage. Reece recently wrote a memoir titled "My Foot Is Too Big For The Glass Slipper," about her marriage, the couple's misses and failures, as well as their most cherished lessons on living happily together and how it make it all work. But one statement in the book set off a firestorm of media reaction last month. Reece wrote, “to truly be feminine means being soft, receptive, and –- look out, here it comes –- submissive.”

HuffPost LA spoke with Reece on the phone from her home in Kauai, Hawaii, to find out if she still stands by her submissiveness statement, how she got into a scuffle with Katie Couric and why fairy tales aren't meant to come true.

The Huffington Post: Your comments about femininity and submissiveness received quite a bit of media attention when the book came out last month. Were you prepared for that reaction?
Gabrielle Reece: Exactly a week before the book came out, NBC sent a group from Rock Center and Kate Snow and this really very cool female producer came out to see me. And I thought to myself, "Great! I'm being set up with people who are going to get me." We spent a couple of days together, but when we sat down to do the interview, I picked up on it right away. I thought, "Uh-oh." And I said to the producer, "I'm going to get killed on this." I could just tell. But, of course, they have to do their job. They said a lot of feminists are going to be angry. I mean they found their hook.

So I anticipated it, but I didn’t know to what degree. I felt it was very lopsided. The fact that they didn't even put in the interview the part about picking a suitable partner …

The submissiveness comment felt out of context?
Correct. We weren't discussing mutual respect and all the other things I said about it. It was good in one way, because it got a lot of attention. It was bad in another way because I felt it was an incomplete message.

In your book you do say, "I'm whatever the opposite of subservient is."
I have always wanted to be the message of be a strong woman, find your maximum power, be all of the things that you are and don't apologize for it. And this particularly delicate and sensitive dynamic, which is a relationship, I was discussing learning a very tough lesson for me -– which was about embracing this role in my particular dynamic and how that has worked well. So I was disappointed in that part of it all because I sort of felt like I had a lot of feminists going ballistic on me.

I was like, listen, I'm not going to backpedal. That would just look worse. I will explain this the best I can and just get on with it. I know what the book says. I think I was okay with it because I know what the book is about. It got to the point where we started joking that the "Messenger of Submissiveness" is 6-foot-3, 175 [laughs]. But it was very humbling for me. In the end, it's probably better because it opened up the conversation wider than I would have been allowed to perhaps. Because maybe people thought that I was going to write about dumbbell weights and no carbohydrates.

Your book's title and some of the quotes in the beginning have to do with the idea of the fairy tale. What was your fairy tale growing up? You mention that your parents' divorce and your father's death wiped a lot of that away for you.
I actually didn't live with either one of my parents for about five years growing up. I think I never had the notion or an example of that fairy tale. And feeling different -– I was five feet and 7 years old and six feet at 12. We all feel different. And my difference was really obvious. I think I ditched that idea. … Actually, I don't know if I ever bought into it. And maybe that was the thing, right? It was always about defining it for myself. When I was modeling, they would ask why are you playing volleyball? And I would say because it makes me happy. So I think I always was connected to this idea of how do I represent myself in my life and is it harmonious with who I really am?

Who do you think instilled that in you? That's a special quality to have.
That’s what the book is supposed to be about. The book is supposed to say, "Hey, I'm not going to tell you how to get there, but can we talk about how we can get there?" For me I think it was just forces of my environment. I had to get there. Or I'd be miserable. I grew up mostly in the Caribbean. It was just a different environment.

Given all that, how do you hope your daughters will relate to the idea of the fairy tale, or this perception of a perfect life?
We hope to convey that it's your personal responsibility to make yourself happy. No one will make you happy. Like my one daughter did something correctly recently and she said are you happy now? And I said my happiness doesn’t rely on that. I think we have age–appropriate, frank conversations with them about these kinds of things.

How old are your children?
I have 5, 9 and a 17-year-old. The thing I teach my girls is no one is going to come and save you. Better learn how to work hard in your life. You have to figure out who you are and what you like and learn how to work hard. And worry about the rest later. Because I think everything is hard work. There's an element to life that is just hard work. If you can learn to be okay with that -- and not frustrated by it or angry about it or try to avoid it -- it's just better.

When speaking about early motherhood, you wrote, "The key to contentment is to lower your expectations." What do you mean by that?
You think your baby is going to sleep through the night and is going to be perfect and off the growth charts and happy all the time and learn to walk before everybody else. You can be in these really competitive environments where you're comparing exactly how many weeks it took to walk. I think you have to go who the child is and take them as they come.

The book starts off pretty personally, with you describing what leads to you and Laird splitting up and eventually coming back together. Was he comfortable with you sharing things this intimate?
I think Laird trusts me. He is a really open person. I mean, he's from Hawaii, from the water. There's a part of him that just says, "Here it is. What about it?" That's one of the things I've learned to embrace more in my own life by living with him.

You guys split your time between Los Angeles and Kauai. What do you like about living in LA? How much time do you spend in each place?
Six months and six months. I love LA. First of all, it's one of the most progressive places in terms of health and fitness. But LA is a place of dreamers. And you can see the bad side of that, but you can see the most amazing side of that, too. I always say, in LA you can go, "I have this idea and I'm going to to this, this and this." And people will go, "Okay!" No one says, "Well why do you think you can do that?" And "That's going to be hard." So I think for me, I want to keep being in environments where people say, "Why not, why can't you?" And I like it for my kids. I like that they have time on an island. And they are around nature and it's a little rough and tumble. And then when we are in LA, they are reminded that it's a big world and you can do anything you want.

What was the hardest part about writing this book for you?
Any time you put something out there, you know someone is going to have something to say about it. The book is really personal and I was being very sincere when I wrote it. But you get to a point -- and that’s a great thing about age -- where you just take it right on the chin, no problem. You have to stand for something in your life. And you have to be comfortable knowing that not everyone is going to agree with some of it. You put your neck on the chopping block but why bother doing it if you're not going to go all the way? Don't bother. Either be there or be quiet.

Well I'm glad you weren't quiet and wrote it ...
Thank you for reading it before you actually talked to me. You'd be surprised. I got into a scuffle with Katie Couric [laughs]. I know her and sent her an email saying obviously you didn't read the book, which is okay, and neither did your producers, which is okay, but because of that you're not listening at all. You had already pre-decided and she was like, "I'm sorry you feel that way." I felt that in a conversation that is so complicated, and difficult as it is, she basically just made it worse. Not a great answer.

Is there a piece of advice you wish someone had given you before you got married?
As a woman, I wish someone had talked to me about not taking things personally. It's not always about [how] you can fix it. Sometimes someone is having a bad day and it has nothing to do with you and you can't fix it. Just let it be. As girls, we want to make everyone happy and you think it has something to do with you, but guess what? It doesn’t.

And also the idea of how to combine being the softest and fiercest of anybody. Animals in nature do it perfectly. You don’t give up one to get the other. And it took me along time to understand that -- that balance. We always say if you see a baby animal, watch out for the mother. We never say watch out for the father.

As women we think we have to act like a man to embrace my power or we have to give all that up and be a woman. How do I learn to embrace all my power as a woman even in those male environments -– like work environments. We have masculinity within us. So how do we develop that organically as women? We can't be men better than men can. There are a few women who have figured it out. And they are badass. 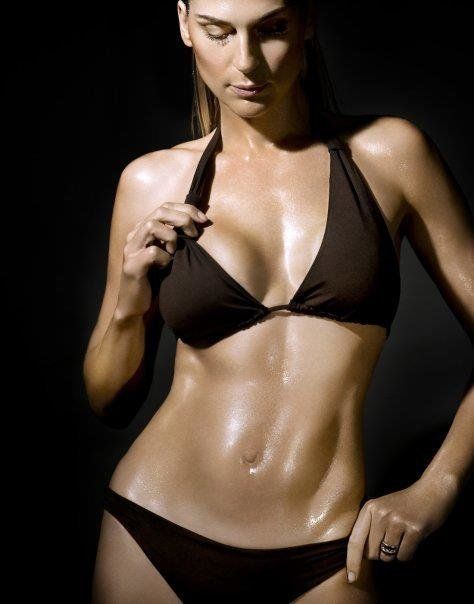