In an interview with Oprah Winfrey set to air Dec. 8, actress Gabrielle Union and her husband, NBA star Dwyane Wade, shared how hurt they were when, after the birth of their daughter in November, commenters online ridiculed Union for posting photos of herself practicing what’s known as skin-to-skin contact, or kangaroo care.

The set of two photos, which she shared on Instagram on Nov. 8, show Union and Wade holding their baby, Kaavia James, who was carried by a surrogate.

“I think for me the most hurtful thing was once we had our baby and everybody started talking about ‘Why is she in the bed holding the baby? Why she got a gown on? Why she acting like she just had a baby?’” said Wade. “And once again, people are uneducated on the process and why we decided to go skin to skin as soon as our baby came out.”

In skin-to-skin contact, parents hold their naked baby to their chest against their bare skin. Research shows that this kind of embrace soon after birth helps calm and soothe the baby; regulate the infant’s temperature, heart rate and breathing; improve the blood glucose levels in newborns; and lower pain levels in babies. It can also help babies sleep better and give parents and child a chance to bond emotionally. And those benefits are especially crucial for babies born prematurely.

For parents like Wade and Union, who needed the help of a surrogate, the skin-to-skin contact takes on additional importance, said Dr. Shannon M. Clark, a maternal-fetal medicine specialist and an associate professor at the University of Texas Medical Branch at Galveston who was not involved in the pregnancy.

She bristled at the accusation that Union was acting as though she just gave birth, noting that wearing a hospital gown with an open front is the easiest way to accomplish skin-to-skin contact.

“I don’t think that anyone who does that is trying to pretend that they gave birth,” Clark said. “It’s just for ease of use and ease of access in order to facilitate adequate skin to skin.”

Union, who was diagnosed with adenomyosis, suffered eight or nine pregnancy losses (she lost count) before deciding to use a surrogate.

Dr. Lisa Erickson, a retired reproductive endocrinologist and infertility specialist in Minnesota who has experience helping people build their family through surrogacy, said skin-to-skin contact is one of several ways that intended parents can bond with their baby.

“Some [intended parents] can be present at delivery, [and] some cannot,” she said. “Kangaroo care is just one method to feel the experience of closeness.”

Clark mentioned that additional kinds of bonding can help intended parents bond with their baby during pregnancy, for example, by attending prenatal checkups to keep updated on milestones and letting the surrogate know what music and children’s books the family plans to share with the baby so that the surrogate can begin listening and reading out loud to the fetus.

“It’s going to be a little bit different for every couple and for every matched intended parent and a [surrogate], but there are ways to facilitate the bonding,” Clark said. “At the end of the day, the hope is that once the baby is here, skin to skin, being involved with the labor and delivery process and being there for the surrogate or gestational carrier is the most important.”

“There are so many ways to build a family, and this is just one of them,” Erickson said. “It’s a gift of unmeasurable love.”

CORRECTION: A previous version of this story incorrectly stated that Dr. Lisa Erickson was an OB/GYN. She’s a retired reproductive endocrinologist. 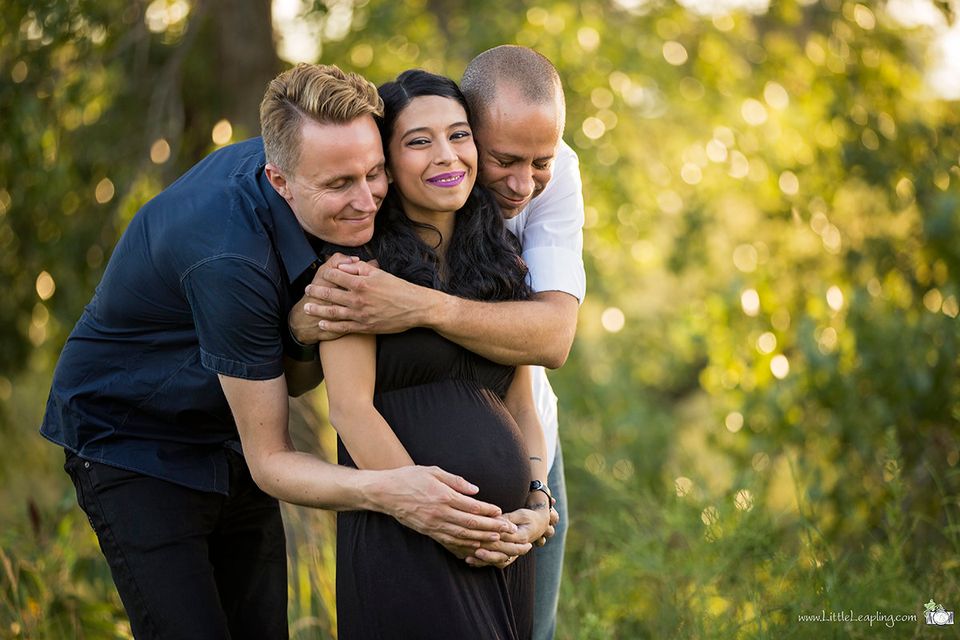 1 / 16
<strong>Johan (right):</strong> We talked loosely about becoming parents for years, but we really started getting serious about our options about five years ago. A couple we are friends with had two babies with a surrogate in the United States, which inspired us.&nbsp;<br><br><strong>Jakob (left):</strong> We contacted an agency that helped connect us with our wonderful surrogate. It took almost a year to get the perfect match. She is not the biological mother. We used an egg donor from Kentucky. We now know her well, and keep in touch.
Tammy Schmit Little Leapling Photography