Wildlife photographer, naturalist and Kensington Explorer in Residence Jonathan Green is one of the world's foremost whale shark experts. His passion for these underwater giants led him to launch the Galapagos Whale Shark Project, a massive effort to shed light on - and ultimately save - the threatened whale sharks, about which practically nothing is known.

My first encounter with a whale shark is something I will never forget. I was submerged in the clear blue waters of the Galapagos Islands, diving for a glimpse of these gentle giants. After a seemingly endless period of nervous anticipation, a 45 ft, 20 ton whale shark approached me slowly, leaving me completely awe-struck. I immediately knew I wanted to dedicate my life to researching and protecting these majestic animals. . 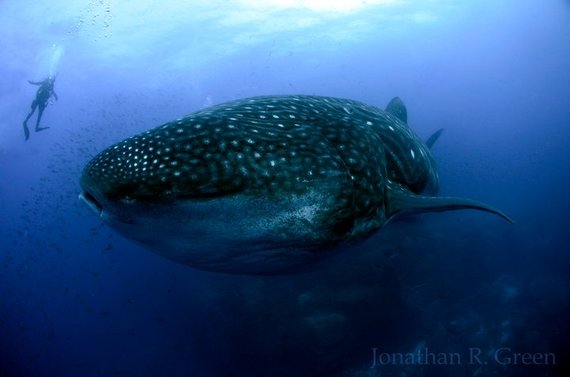 I trained as a naturalist with the Galapagos National Park and worked at the legendary Charles Darwin Research Station. As I began my research I realized how little information us humans have about these gentle giants and their natural history. This animal has been roaming the world's oceans for 60 - 80 million years, is larger than most dinosaurs and yet no one had studied their natural history. We don't know where they breed, how they breed, how they feed, their migratory routes, how they travel and even how many of them there are in the world. 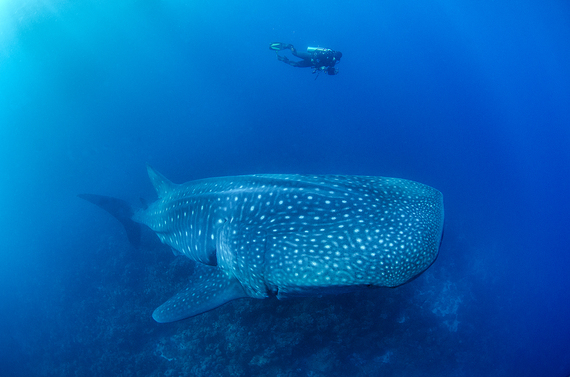 What we do know, however, that whale sharks are being illegally hunted and killed for profit. One factory in Hong Kong reportedly processed over 600 whale sharks last year alone. No exact figures are available on how many whale sharks are being killed, nor what the total global population is, but data from scientists around the world indicate that this is not a species that reproduces in great numbers and that this kind of fishing threatens the survival of the species.

Together with the Galapagos National Park Service and the Charles Darwin Foundation, the Galapagos Whale Shark Project has placed 50 satellite and acoustic tags on Galapagos whale sharks. We've collected DNA from 25 sharks, with photo identification and laser biometry, and we're now collecting reams of never-before-seen data. 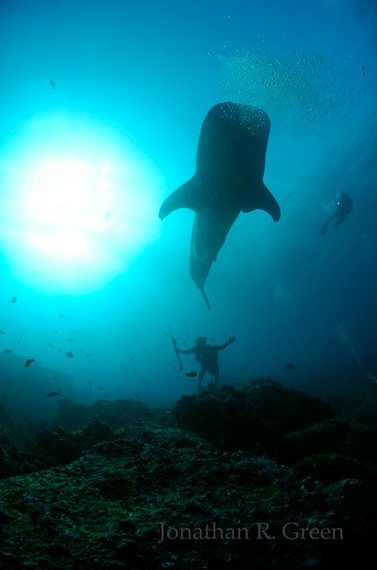 A striking fact we learned as part of the Galapagos Whale Shark Project is that the population of whale sharks that frequent the Galapagos Islands, Darwin Island in particular, is 99.6% female. Furthermore, over 90% of these females appear to be in the late stages of pregnancy. This begs the question - why are these females all converging on one particular island in the archipelago? No one has ever witnessed whale sharks breeding or giving birth, and we don't have any knowledge of where they live before reaching age 3 - 5 years. Could we have discovered the elusive pupping grounds? The depths of the ocean here are unsafe for divers to safely investigate, but we hope to employ manned submersibles to observe the sharks in their deep water birthing grounds.

Much remains to be done in order to better understand the natural history of these gentle giants, but time is of the essence if we are to unravel these mysteries before the slaughter and commercialization of whale sharks leads to their extinction.