They are like ninjas, dressed completely in black, spying and moving stealthily in the night to avoid detection. These are not military commandos, but rather a trio of Galápagos National Park rangers, backed up by an international group of volunteers, monitoring the nesting activities of green sea turtles. The 2014 nesting season runs from January until June and the group's mission is to protect the eggs from predators. The sea turtles began breeding in December and the females are now heading for the beaches of Galápagos to lay their eggs.

The scene is played out nightly at La Quinta Beach on Isabela Island, where the rangers have set up camp. This is outside the areas open to visitors and is the main Galápagos nesting area for the turtles, known to scientists as Chelonia mydas. The park also plans to set up a second monitoring camp on Las Bachas beach on Santa Cruz Island, another nesting area. 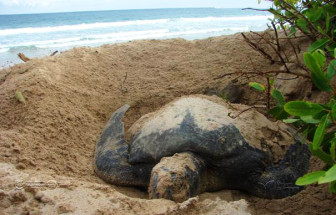 Using red light, which the turtles can't see, members of the monitoring team work in pairs to track the females. Team members sneak behind the lumbering creatures as the turtles choose spots to dig nests with their hind flippers. As the turtles lay their eggs, the monitors count each one. A typical nest chamber is about 20 inches deep and can hold about 70 eggs. The National Park Directorate said in a press release that the monitors counted 30 nests on the first day.

A typical shift for the group runs from about 9 p.m. until dawn. When they're done spying, monitors enter information for each nest in a computer database that's used for tracking the turtle population. They'll revisit the nests in about 50 days to see how many of the eggs have successfully hatched.

A park spokesperson said that two big concerns are feral cats and wild boars that consider the turtle eggs a delicacy. Another is the fleet of small fiberglass powerboats plying the waters off Isabela. Many of the turtles have been injured or killed tangling with the boats' propellers.

According to Eduardo Espinosa, a technician with the park's ecosystem directorate, about 60 percent of the turtle eggs hatch successfully. But he notes that because of predators, including many Galápagos bird species, a turtle hatchling's odds of making it to adulthood aren't great-only about 1 in 1,000.

The turtle monitoring project is one of many that the park has undertaken to watch over the fauna of the Galápagos Islands and protect them from intrusion by humans and other introduced species. On Santa Cruz and Isabela islands, park personnel are conducting a census of the flamingos to determine the size of the population. In previous years, scientists estimated there were about 500 of the colorful birds in the Galápagos.

On San Cristóbal Island, the park has announced the popular Playa Mann beach is closed to bathers on weekend afternoons so that the sea lions can mate relatively undisturbed by beachgoers. The restriction began on January 11 and will run until February 16. Here, the big concern is human safety. 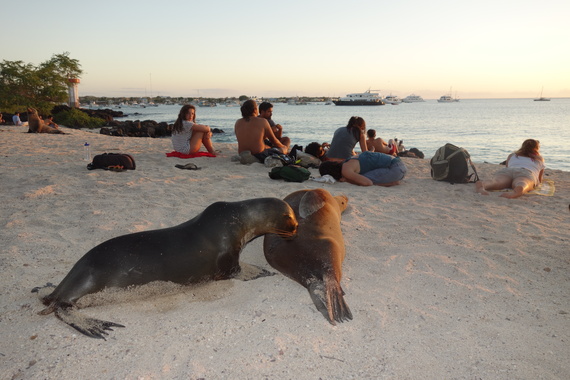 Park representative Carlos Ortega told Galápagos Digital that during mating season, "the male sea lions can become very aggressive," so the best advice for humans is to stay out of the water while the sea lions are doing what comes naturally.

Playa Mann is relatively small (about the length of a football field) and gets about 300 visitors a day during Saturdays and Sundays. Visitors, Ortega said, will be greeted by park personnel who will explain the weekend ban on swimming between the hours of 1 p.m. and 6:30 p.m.

Sea lions can also suffer negative effects of interacting with humans and the pets they've brought to the islands. As Galápagos Digital reported in July of last year, a British study of sea lions showed that those in inhabited areas of the Galápagos suffer more health problems than those who seek the uninhabited islands. They may be picking up diseases from dogs and other domesticated animals introduced by humans. The Galápagos National park has not yet confirmed this but is conducting its own study on the sea lion population.

The park is planning a community forum on sea lions for San Cristóbal residents on March 5. Ortega said an international panel of experts will talk about how humans can better share the beaches and protect the sea lions.