Our cosmos is a veritable alphabet soup, featuring galaxies that resemble every letter from A to Z, volunteers participating in the online Galaxy Zoo project have found.

Since 2007, Galaxy Zoo has been asking regular folks around the world to classify galaxies by shape. So far, more than 250,000 people have sorted through roughly 1 million images, saving scientists precious time and helping reveal key insights about galaxy formation and evolution, project officials say.

The work has also produced some odd and quirky results, such as the fact that every letter in the alphabet is galactically represented. A celestial zoo may be in the offing, too, since citizen scientists have also found a penguin-shaped galaxy — an example of a phenomenon called pareidolia, in which the human brain recognizes shapes in random images. 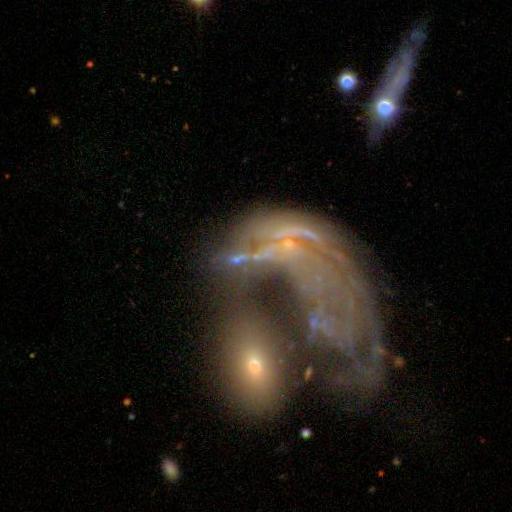 Volunteers with the online Galaxy Zoo project spotted a galaxy that looks like a penguin.

Even these fun finds could have scientific value, shedding light on what happens when galaxies collide, researchers said. [Photos of Great Galactic Crashes]

"We’d like to thank all those that have taken part in Galaxy Zoo in the past five years," Galaxy Zoo principal investigator Chris Lintott, from the University of Oxford, said in a statement. "Humans are better than computers at pattern recognition tasks like this, and we couldn’t have got so far without everyone’s help."

The Galaxy Zoo team is launching a new incarnation of the site, which can be found at http://galaxyzoo.org. As of today (Sept. 10), Galaxy Zoo will include more than 250,000 new images of galaxies, most of which have never been seen by human eyes before, officials said.

"Now we’ve got a new challenge, and we’d like to encourage volunteers old and new to get involved," Lintott said. "You don’t have to be an expert — in fact, we’ve found not being an expert tends to make you better at this task. There are too many images for us to inspect ourselves, but by asking hundreds of thousands of people to help us we can find out what’s lurking in the data."

"The two sources of data work together perfectly: the new images from Sloan give us our most detailed view of the local universe, while the CANDELS survey from the Hubble telescope allows us to look deeper into the universe’s past than ever before," said Galaxy Zoo team member Kevin Schawinski, from the Swiss Federal Institute of Technology in Zurich.

Galaxy Zoo scientists hope that volunteers' work on the new site will shed light on how nearby galaxies took shape and changed over time, officials said.

To write a message with galactic letters, visit http://www.mygalaxies.co.uk, a site set up by Galaxy Zoo team member Steven Bamford of the University of Nottingham.