There are many amazing characters and creatures described in the Hebrew Bible, but elephants are not among them.

Imagine the surprise of a team of archaeologists who were in the midst of their fourth summer of excavations at an ancient synagogue in Israel’s Lower Galilee when they discovered elephants in a mosaic panel where they expected only to find biblical scenes.

There on the floor of a 5th century synagogue in the ancient Jewish village of Huqoq was an entire mosaic panel depicting non-biblical scenes, uncovered for the first time in 1,600 years. Until now, every other decoration archaeologists have discovered on an ancient synagogue has depicted scenes from the Hebrew Bible, as Director of the Huqoq excavations Jodi Magness from the the University of North Carolina at Chapel Hill (UNC) told HuffPost.

Three previous summers of excavations unearthed some fascinating but traditionally biblical discoveries, but during the 2014 dig season Magness and her team discovered an entire mosaic floor panel in the synagogue that depicted a three-part scene, which Magness said the creators likely intended as a story-telling decoration.

"The three registers probably depict a story that was meant to be 'read' from bottom to top," Magness told HuffPost, "with the top register representing the culmination of the story."

At the bottom of the panel is a depiction of a dying soldier pierced by a spear and holding a shield and a dying bull, who is also pierced by spears. The middle section shows a row of male figures dressed in ceremonial white tunics and mantles, Magness said, each framed by an arch. The central figure is elderly and bearded and holds what Magness said appears to be a scroll. The other men are young and hold swords or daggers.

At the top of the panel there are two large, bearded male figures depicted in the center. One is a Greek military commander and ruler, which Magness said is indicated by his elaborate military attire, purple cloak and corded diadem, leading a bull by the horns. The other is an elderly bearded man -- apparently the same one depicted in the middle scene. To the left of the elderly man are young men in white tunics and mantles, as in the middle section. To the right of the commander is a row of soldiers and, surprisingly, battle elephants with shields tied to their sides. 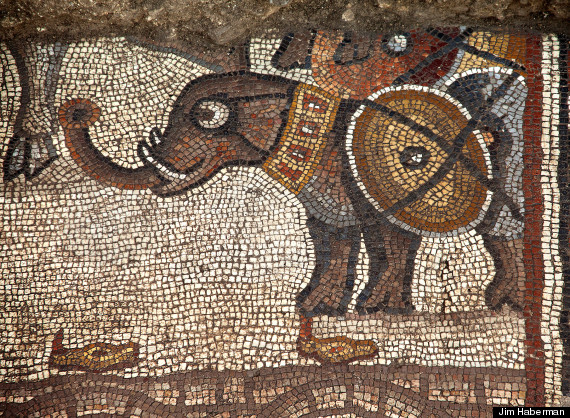 Because there are no stories from the Hebrew Bible involving elephants, Magness said, her team deemed the entire mosaic, which has been removed from the field for conservation, to be representative of a non-biblical story. The question is, what story was it depicting?

Though Magness said she could not yet speculate on the mosaic's meaning, she did offer some suggestions.

"The possibilities that we are considering include that this panel depicts the meeting between Alexander the Great and the Jewish high priest (a legend told in different versions by the ancient Jewish historian Flavius Josephus and in rabbinic literature), or that it depicts a story based on the Maccabean martyrdom traditions," Magness told HuffPost by email. 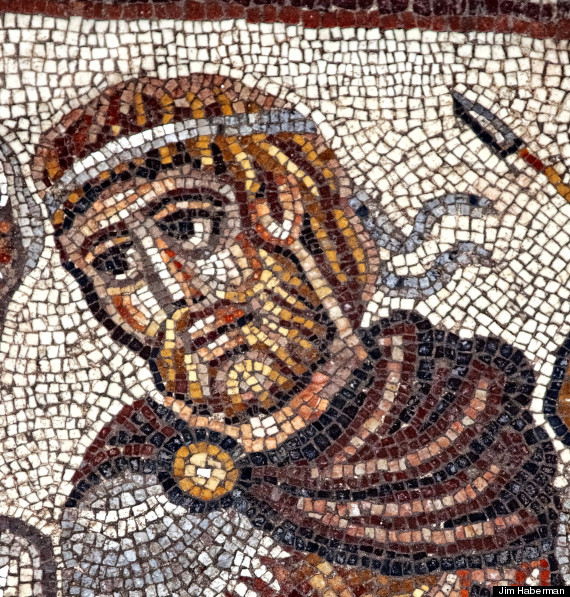 The Greek military commander and ruler.

Whatever the mosaic's significance, Magness said the experience of seeing it for the first time was a highlight of her career. Orna Cohen, the site conservator, did the final work of uncovering the floor while the rest of the team looked on incredulously.

"We knew we were coming down on a mosaic because we had found other mosaics nearby at the same level," Magness told HuffPost. "However, we did not know to what extent the mosaics were preserved, or what their content was. I gathered all of the staff and students that morning, and we stood around watching as Orna slowly and carefully cleaned the mosaic, bringing to light these images for the first time in 1600 years. It was amazing!" 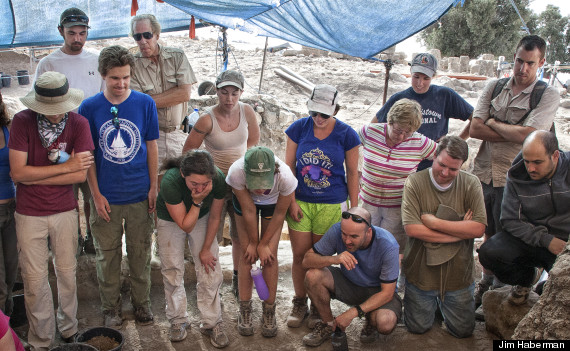 Huqoq voluteers watch as the mosaic is unveiled.

Magness' team had encountered biblical scenes every summer preceding 2014, but even those were by no means generic, Magness said. First was Samson and the foxes, recounted in Judges 15:4, in which Samson takes revenge on the Philistines by using 300 paired foxes with lighted torches between their tails to burn down the agricultural fields of the Philistines. The other depicts Samson carrying the gate of Gaza, described in Judges 16:1-3. After visiting Gaza to sleep with a prostitute, Samson discovers that the townspeople have planned to attack him, but he fools them by pulling up the gate of Gaza and putting it on his shoulders as he walks towards Hebron. 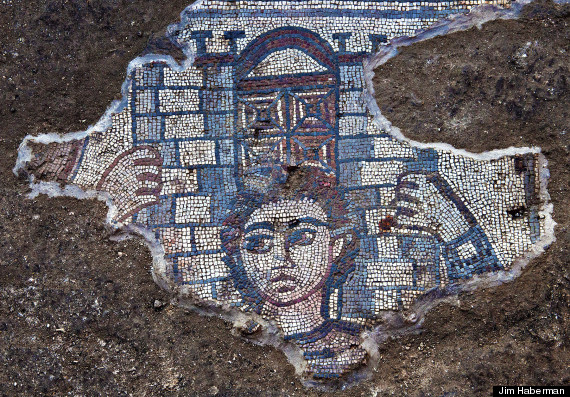 Samson carrying the gate of Gaza.

Few decorations on ancient synagogues depict scenes with Samson -- in fact Magness said that so far only one other in Israel has been found with such a scene. Given that Jews in the 5th century were living under Byzantine Christian rule, Magness said, these congregations may have been looking for a messiah figure.

"We believe that these Jewish congregations may have viewed Samson as a prototype of a messianic figure - a mighty warrior and redeemer who did great deeds on behalf of Israel," Magness told HuffPost. "In other words, these congregations might have thought that the future messiah will be a Samson-like figure."