Obama approval hits a milestone on Gallup's daily tracking. Open-ended questions show two very different nomination contests brewing. And the nation is bitterly divided by those who think the Patriots cheated and those who don't care. This is HuffPollster for Tuesday, January 27, 2015.

GALLUP: OBAMA APPROVAL HITS 50 PERCENT - Lydia Saad: "Less than a week after President Barack Obama delivered his State of the Union address to Congress, his job approval rating reached 50% in Gallup Daily tracking conducted Friday through Sunday. This is the first time the president's rating has returned to that level in Gallup's ongoing three-day rolling averages since June 2013....His approval recovered slightly to 42% by the time of the Nov. 4 midterm elections. Following the elections -- after announcing executive actions on immigration and benefiting from an improving economy and falling gas prices -- his approval rating has gradually improved, averaging 44% in December and 46% thus far in January. Even if Obama's job approval rating doesn't hold at the 50% level, it has consistently registered in the mid- to high 40s throughout January, earning him the highest weekly averages he has seen in more than a year. His weekly average for the seven days ending Jan. 25 was 49%, up from 46% each of the prior three weeks, and from 44% in late December." [Gallup] 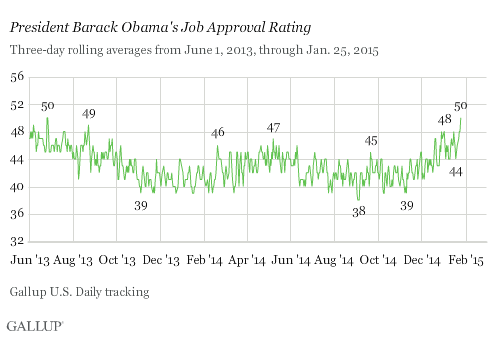 Follows growing economic confidence - More from Saad: "Notably, the recent uptick in Obama's weekly job rating follows a period of significant improvement in Americans' confidence in the U.S. economy. Economic confidence started improving in September. It then intensified in late December when Gallup's Economic Confidence Index crossed into positive territory for the first time in more than seven years, and it has since remained positive. Americans' ratings of Obama appear to be catching up with their improved economic views. It is not entirely clear why Obama's job approval rating has been slow to rebound relative to improved economic confidence, but one reason could be the political blow Obama took in November over his party's sweeping midterm election losses. Another could be the racial tensions that engulfed the country late last year over certain police interactions with young black males."

Other polls show similar trend - Obama's current rating on in the aggregate of all polls depends, as it has for the last month or so, on how much we trust the most recent surveys. The default trend line of the HuffPollster chart, which tracks and combines all of the publicly available national polls, estimates Obama's current approval rating at 45.1 percent, up just over two percentage points since late October. His approval has risen over six percentage points, to 48.8 percent, when we set the chart to "less smoothing," an option which makes the trend line more sensitive to shifts in opinion. As HuffPollster noted earlier in the month, two factors argue that the "less smoothing" setting is more valid: First, most of the new polls released over the last few weeks show an approval percentage above the default chart's current 45.1 percent value. Second, over the first six years of the Obama administration, the "less smooth" trend introduces little or no variation that appears truly random, while picking up real movement that the default trend misses. [Pollster chart, HuffPollster 1/15/2015] 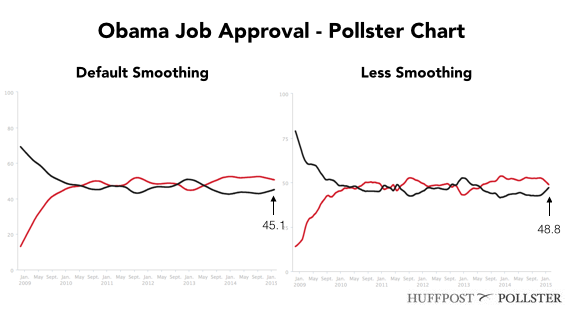 THE GOP FIELD REMAINS WIDE OPEN - Susan Page: "No wonder so many Republicans are considering a bid for president in 2016: It may be the most wide-open field ever. A new USA TODAY/Suffolk University Poll finds Republican and Republican-leaning voters scattered among 18 prospective nominees when asked an open-ended question about whom they want the GOP to nominate for president next year. 'Undecided' finishes first, at 45%, trailed by 2012 nominee Mitt Romney at 16% and former Florida governor Jeb Bush at 13%. No one else gets close to double digits, though potential contenders including Texas Sen. Ted Cruz, Florida Sen. Marco Rubio, New Jersey Gov. Chris Christie and others make the list of those mentioned. The contrast couldn't be sharper with the other side. A 51% majority of Democratic and Democratic-leaning voters name former secretary of State Hillary Rodham Clinton as their preferred nominee; 31% are undecided." [USA Today, Pollster GOP chart, Pollster Democratic chart]

WHY IT'S HARD TO MEASURE GENDER BIAS IN RESPONSE TO HILLARY CLINTON - Margie Omero (D) on a Washington Post/ABC News poll that attempts to test if Hillary Clinton's gender works in favor or against her: "It even suggests by two-to-one, she benefits from her status as the potential first woman President (although far more say it makes no difference). But can we trust voters' own perceptions of their prejudices?...Results like these almost certainly reflect the [social] desirability bias, rather than true bias... Taking all this into account means it's tricky to draw conclusions about bias from responses to explicit questions about Clinton's gender. Not everyone is equally aware of bias, and even fewer are willing to admit their own...Further, in the current Washington Post/ABC poll, party identification -- not gender -- seems to be a bigger driver of one's view of Clinton's gender…So we'll need far more than a single question to decode the role gender has in Clinton's political fortunes. We would need to control for party, and mask that we're investigating bias. Because if voters are viewing Clinton through the lens of party, rather than gender, perhaps that may be progress after all." [HuffPost]

AMERICA WEIGHS IN ON DEFLATEGATE - Peter Moore: "75% of the country have heard about the controversy surrounding the underinflated balls, and 38% of Americans say that the Patriots cheated by playing these balls. 24% say that they didn't cheat, but the largest group is narrowly the 39% of Americans who flat out say that they don't care about whether or not the Patriots are cheaters. Among people who say that they follow professional football, 50% believe that the Patriots cheated while 31% say that they didn't. There has been speculation that the head coach of the Patriots, Bill Belichick, could be suspended from the Super Bowl as punishment for the underinflated balls. Overall, Americans who care about the issue are nearly evenly divided, with 31% saying he should be suspended and 26% saying that he shouldn't. Among football fans opinion is split down the middle, with 39% backing a suspension for Belichick and 38% opposing it. [YouGov] 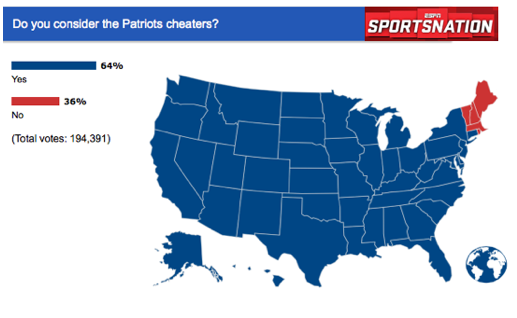 -Washington University researchers find that 1 out of every 2,000 tweets is about marijuana. [WashPost]

-60% of Americans have no knowledge of Sikhism. [NationalSikhCampaign]

-Glen Bolger (R) notes the Republican base is divided on Cuba, while Democrats divide on Keystone. [POS]

-It's a mistake to assume that vaccine deniers are "hippy liberals." [WashPost]

CORRECTION: An earlier version of this article misstated the author of the Gallup article on approval ratings.