Those looking for a convention bump may find what they are looking for in the Gallup daily tracking poll, which produced good news on Friday for President Barack Obama.

Gallup's last three nights of interviewing of adults, conducted Sept. 4 to 6, shows Obama with a 52 percent approval rating, the highest approval percentage reported for Obama on the Gallup tracking poll since May 2011, just after the killing of Osama bin Laden.

The latest results represent a seven percentage point increase in Obama's approval rating, from 45 percent, from Gallup's previous three-day sample, conducted Sept. 1 to 3. Each sample is based on interviews with roughly 1,500 adults and has a margin of sampling error of +/- 3 percent. 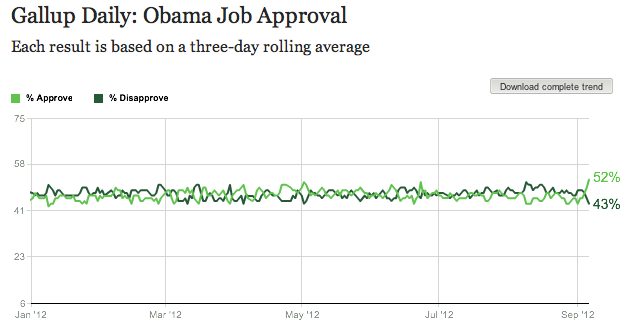 Gallup also shows an uptick for Obama in their tracking of the presidential vote preference question. Results released Friday show Obama with a 3-point lead over Republican nominee Mitt Romney (48 to 45 percent). That result represents an upward movement of just a single percentage point for Obama and a single point down for Romney, but it is the first change in Gallup's numbers in 9 days. From Aug. 28 to Sept. 5, Gallup has shown Obama ahead of Romney by a single percent point (47 to 46 percent).

The more muted reaction on the vote question is likely due to interviews being conducted over a longer period of time. Gallup reports presidential vote preference for registered voters using a seven-day rolling average rather than the three-day roll up of adults used to report their job approval rating. If Gallup is picking up movement on their vote question to match the shift in the Obama approval rating, and if that change persists, the vote numbers should continue to move in Obama's direction as well.

Most other prominent national pollsters have not been fielding surveys during the course of the two conventions, in part because of the historic tendency of polls to "bounce" up and down as the conventions are underway. Other daily tracking polls -- such as the automated telephone surveys conducted by Rasmussen Reports or the new Internet-based survey conducted by Reuters-Ipsos -- have not yet picked up a pro-Obama bounce.

The bigger question, of course, is whether this change is just a momentary "bump" in Gallup's numbers, or if it represents a meaningful change in voter preferences that will persist beyond convention week.

UPDATE: 5:31 p.m. -- Friday's update of the Reuters/Ipsos online poll also found indications of what Reuters describes as a "convention induced bounce," though the change was also modest. It showed Obama taking a 46 to 44 percent lead over Romney on interviews conducted with likely voters over the last five days. On interviews conducted over the five days before that, the Ipsos poll showed a 45-to-45 percent tie.