Well, this week, the esteemed pollsters at Gallup made some headlines when, for the first time, President Barack Obama's approval rating dipped below 40 percent. That result underpinned any number of stories that read, "Terrible Economy Presents Problems For Obama." Well, that's undeniably true. But a less remarked-upon bit of polling from Gallup is this bit here, in which they set out to gauge the nation's "economic confidence." What they found was remarkably consistent -- state by state, there are more people lacking in confidence than there are people who feel the economy has turned around.

So once again, the real story is, "Terrible Economy Presents Problems For Ordinary Americans." But if you don't see those stories, there's a reason why, and it has everything to do with the one outlier in Gallup's findings. If you want a hint as to where that outlier is, consider this: every single one of this poll's respondents said they were currently employed. In every state, Gallup spoke to people who are at least fortunate enough to have a job ("87,634 employed adults, aged 18 and older, conducted from January-June 2011").

So with that in mind, what part of America do you imagine has the highest concentration of employed people who don't have personal relationships with people who are unemployed? 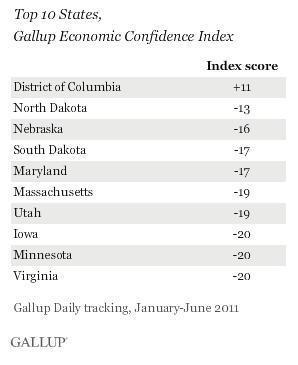 Yes, it seems that the one and only place in America where anyone has any confidence in the economy also happens to be Washington, D.C., home to political elites, the media that covers them, the people who win the relevant contracts and the people who feather their nests lobbying for the laws that impact the other United (in their lack of economic confidence) States Of America.

The biggest gap between the District of Columbia and the rest of the country is created by the second question used to create the Economic Confidence Index, on whether the economy is getting better or worse.

(It's actually remarkable that Gallup's results yield this distortion, because by other measures, the Beltway bubble is even more pronounced. If you connect Washington, D.C., with Virginia's D.C.-adjacent affluent neighborhoods Alexandria and Arlington, the unemployment rate (from June) is 6.2 percent.)

Of course, if 60 percent of the people in the nation's capital think the economy is getting better, that leaves 40 percent that don't. For their story, here's Adam Serwer:

So no, the economy in D.C. isn't "doing fine," unless we're mostly talking about college educated whites, and unless you mention the city's stark racial and class divides you're not addressing the issue honestly.

The Ward 7 unemployment rate is 18 percent and Ward 8's is 26 percent. So, basically, another part of the problem is that Gallup only seems to have the phone numbers of Washingtonians who live in neighborhoods where that hot new gastropub just opened.