WASHINGTON -- A new USA Today/Gallup poll conducted Tuesday night finds that more Americans oppose (46 percent) than favor (39 percent) the debt ceiling agreement passed by Congress this week, largely confirming the results of a CNN/ORC survey conducted the day before. While both show a lack of enthusiasm about the deal across political lines, Republicans and conservatives express far more disapproval than do Democrats.

The two surveys provide a largely consistent picture of how attitudes about the agreement break down along party and ideological lines. According to the Gallup poll, a majority of Democrats (58 percent) and liberals (51 percent) approve of the deal, although significant minorities of both groups express disapproval (28 and 35 percent respectively). The results are reversed on the other side, with large majorities of Republicans (64 percent) and conservatives (64 percent) expressing disapproval. Although the CNN poll found fewer Americans with no opinion than the Gallup poll did, their results were similar by party and ideology. 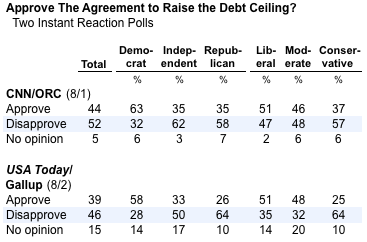 Results from the Gallup poll suggest two sources for the negativity: First, only 20 percent of Americans describe the agreement as a "step forward" in addressing the federal debt, while 22 percent believe the agreement represents a "step backward" and 50 percent say it represents neither.

Respondents were far less polarized on the question of economic impact than they were over whether or not they approved of the deal; all groups felt pessimistic about the deal's effect on the economy. More Democrats believe the deal will make the economy worse (33 percent) than better (29 percent). Nearly six times as many Republicans and conservatives, meanwhile, are negative about the deal's economic impact than are positive. 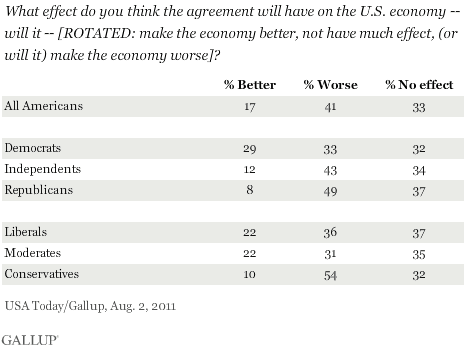 Although neither poll release examines the combination of party and ideology, the results imply that self-described liberals are more likely to disapprove of the deal than other Democrats. In the Gallup poll, for example, liberals were more likely to express disapproval (35 percent) than all Democrats (28 percent). Liberals were also less likely to say the deal would have a positive effect (22 percent) than all Democrats (29 percent).

Nevertheless, the biggest differences appear across party lines. While dismay has been evident among those in President Barack Obama's liberal base, the deal may provoke even more of an intra-party backlash against Republican lawmakers who supported it.