As the new Republican majority in the House begins debate on a proposal to scuttle President Obama's landmark health reform act, Gallup released a new poll showing net support (46% to 40%) for repeal. Although Gallup characterized the result as falling short of a strong endorsement of the repeal proposal, their results imply more support for a complete repeal than indicated by other recent polls.

Gallup's question was framed to replicate the decision facing members of Congress:

They found 46% ready to vote "yes" (to repeal), 40% ready to vote "no" and 14% with no opinion when offered these choices. If we assume that all Americans are following the ongoing debate closely, and thus have ready-made opinions about whether Congress should keep or repeal the health reform law, this construction makes sense. But few Americans follow politics that closely.

The notion of "repeal" might also pose difficulty for respondents who oppose the Obama health care law from the left. The CNN/ORC poll has found a substantial number of Americans (13% on their last three surveys) who say they oppose the health reform bill because its approach is "not liberal enough." How would these Americans respond to a question like the one Gallup posed, which offers only "repeal" or "leave stand" as choices?

Unfortunately, the CNN poll has not yet asked about repeal. But when other pollsters ask repeal questions with additional answer categories that take into account the mixed or uncertain feelings many Americans have about the new health reform law, they find much less support for the sort of total repeal now being debated in the House. Consider the results from four national polls fielded in the last three months: 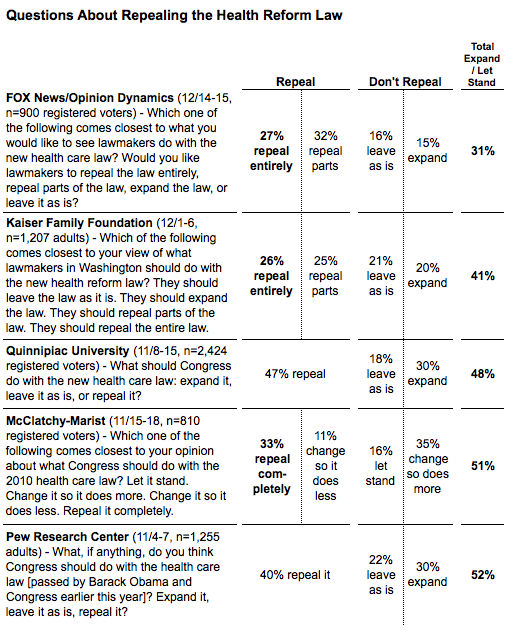 Source data via The Polling Report and Pew Research Center.

All five pollsters offered the option to "expand" the law or "change it so it does more," with anywhere from 15% to 35% offering support for that option. More important, three of the five offered a middle-ground option to repeal only "parts" of the law, which reduced support for a complete repeal to between 26% and 33%.

The new Gallup question involves another complication. Some respondents may be confused by the association of a negative (repeal) with a positive (vote yes). Such double negatives are often asked in surveys, as Professor Don Dillman points out in his textbook on Mail and Internet Surveys, because of elections where voters are asked "to vote for measures where a yes vote would result in something not being done," just like the Gallup repeal question. Dillman notes, however, that the word "not" (or in this case "no") is often missed by respondents who do not read or listen to questions closely. "In addition," he writes, "the mental connection of favoring a 'not' is difficult for most people."

Back in June, Gallup fielded a survey for USA Today that asked more generally about a health reform repeal ("Would you favor or oppose Congress passing new legislation this year that would do the following? How about repeal all or much of the health care legislation passed earlier this year?"), and found 50% favoring repeal and 45% opposing it. The same survey included a more general measure that found 49% of respondents said it was a "good thing" that "Congress passed this legislation," and 46% said it was a "bad thing."

I asked Gallup to provide a cross-tabulation, and it found that more than a quarter (26%) of those who said it was a "good thing" that Congress passed health reform also said they "favored" repeal. A smaller number (20%) of those who said they considered the passage of reform a "bad thing" opposed a repeal. At the time, Gallup analyst Lydia Saad added via email that they had "some internal discussion" about whether it would be inconsistent for people to want to repeal a bill they considered a "good thing" (or vice versa). "We generally agreed," she wrote, "there are a number of logical reasons for many people to hold those combinations of views. Of course, for whatever reason, there is also a baseline level of inconsistency we can expect for any two seemingly related questions."

Perhaps for that reason, the pollsters at ABC News and theWashington Post took a different approach to asking a repeal question. They asked it only of those who said they did not support the new health reform law in a previous question and, not surprisingly, found less support for a repeal. The Post/ABC survey, for example, found opponents of reform "divided on repeal:"

Most of those who oppose the health care changes - 59 percent - want the law repealed, but 38 percent would prefer a "wait and see" approach. Moreover, those who favor repeal are split about evenly between a complete rollback (29 percent of all opponents) and a one that's limited to parts of the law (30 percent).

The bottom line is this: Attitudes about repealing the health reform law do not easily reduce to a single number. And support for an explicit repeal of all aspects of the law falls far short of a majority.