Not exactly, but Gallup's Monday afternoon update suggests the initial bounce that Romney received from last week's presidential debate may already be starting to fade.

Nevertheless, as of Sunday night, Gallup's seven-day rolling average continued to show Obama leading by three points. "Even on this basis," wrote Gallup's Jeffrey Jones, "the race has become somewhat more competitive compared with before the first debate." In the eight days prior to the debate, the polling firm's seven-day averages had shown Obama leading by 4 to 6 points. 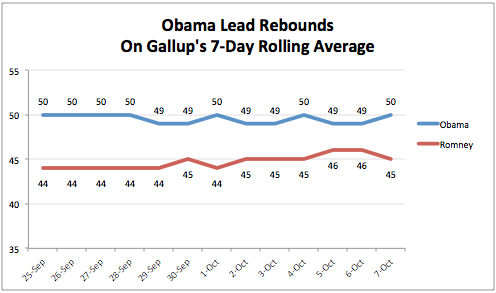 But on Gallup's latest seven-day results, the numbers reported on Monday afternoon, Obama's lead again expanded to 5 points. Given the consistency prior to the debates, the latest result at least suggests a slight rebound for Obama on Saturday and Sunday.

Gallup's daily tracking of the president's job approval rating is also reported on a three-day, not seven-day, rolling average. It suggests a similar pattern: Obama's numbers bottomed out in the interviews conducted Thursday to Saturday, Oct. 4 to 6, and were better on Sunday, Oct. 7. 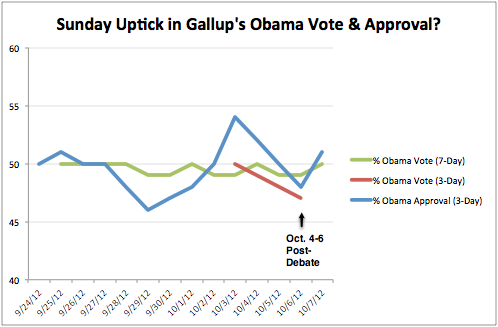 Those apparent Sunday upticks may be random noise, but the results gave Democrats something to smile about on Monday afternoon. At very least, on just one day, Gallup produced numbers to please partisans on all sides.

The HuffPost Pollster tracking model, based on all available public polls, continues to show a narrowing in Obama's margin over the past week, but as of this writing, the morning's updates had widened his margin to just over 2 points.