O Lord, how long? How long, Lord, wilt Thou be angry for ever?

Well over three years ago, as I was conducting deep background research for my book, The Lies of Sarah Palin: The Untold Story Behind her Relentless Quest for Power, I had an off-the-record discussion with one of John McCain's closest advisors about Steve Schmidt's participation in the selection of Sarah Palin as McCain's running mate. "Steve is undergoing some serious soul-searching about his role in all this," the advisor said, "and he's got a ways to go. But you should probably give him a call."

At the time, I was trying to assimilate in my own mind how the "best and the brightest" in the Republican Party had so shamefully -- and irresponsibly -- landed on Palin as McCain's vice-presidential selection during what many viewed as one of the most critical junctures in American political history. I devoted more than forty pages to that enterprise in my book, and it was, indeed, a complex, convoluted and highly flawed process that led McCain and Company to first contact Palin at the Alaska State Fair in the late summer of 2008. 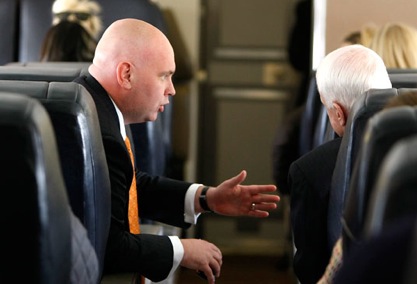 Eventually, I made arrangements with Schmidt for an initial off-the-record conversation. I wasn't sure what to expect. This was a guy who the likes of Karl Rove had nicknamed "The Bullet" and McCain had nicknamed "Sarge." He had served as Dick Cheney's counselor and was tasked with seeing the Supreme Court confirmations of justices John Roberts and Samuel Alito through the Senate. More recently he had salvaged Arnold Schwarzenegger's flailing campaign in California. We didn't exactly sit on the same side of the political fence.

As a former high school tight end with a bulky six-foot frame, Schmidt had a reputation for being both imposing and intimidating. Republican strategist Alex Castellanos once dubbed Schmidt "the perfect killing machine" in respect to his political messaging. When Palin's vetting had come under fire in the days following her selection, Schmidt had issued an anger-fueled response accusing the national media of being "on a mission to destroy" Palin with "a level of viciousness and scurrilousness" previously unseen in American journalism. He was wrong. He and his cohorts in the McCain campaign had not fully nor adequately vetted Palin, and the national media were simply doing the job that he and his colleagues should have done.

I had decided in advance of our meeting that if Schmidt tried to inhibit my research into the vetting in any way I was going to push back, and push back hard. I wasn't going to tolerate any of his tough-guy shtick or any of his spin-making prowess that I had read about during the campaign. When we met, Schmidt, with his trademark shaved head, was cordial, albeit cautious, in his remarks. What I found was not a right-wing ideologue, or even a cynical Republican apparatchik, but a young man then still in his thirties who was honestly and rigorously confronting not only his conscience but also his political values. Moreover, he was carefully examining his own recent journey during which the world's oldest democracy had just conducted its national election for president.

At that point, he hadn't come to any conclusions (at least he wasn't tipping his hand if he had), though I came away sensing quite powerfully that he knew that he and his colleagues in the McCain inner-sanctum had made a serious -- and potentially dangerous -- mistake in selecting Sarah Palin as the Republican Party's vice-presidential nominee. With that I wholeheartedly concurred -- and I let him know it in very clear terms. We parted and agreed to meet again.

Having just watched an advance copy of HBO's Game Change, which premiers this coming Saturday night, March 10, at 9 p.m., I couldn't help but recall that initial meeting with Schmidt, held at an upscale restaurant in Sacramento. For all the hyperbole being focused on Palin about the film, Game Change is actually less about Palin and more about the transformation that Schmidt underwent during the 2008 campaign. It's about the inevitable conflict between political idealism and personal ambition, between practical expediency and higher moral standards. And it raises larger issues about the nature of American democracy and political celebrity in the age of the internet and 24/7 news cycles.

The film is essentially framed by Schmidt's view of the campaign. He is its conscience and its voice. It begins with his celebrated 60 Minutes interview in January of 2010 with Anderson Cooper--in which he declared that "there were numerous instances that [Palin] said things that were not accurate...that she was being untruthful and inaccurate" -- and it ends with that interview as well.

In between, Schmidt undergoes an agonizing personal transformation, one in which he realizes the poison that he has heaped upon the American body politic and the troubling implications of what Ed Harris-as-John McCain describes as the "dark side of American populism." While McCain and his advisors watch with horror the "rough beast" they have unleashed, to borrow a phrase from Yeats, Palin is fueled by it all, drunk with the power of her strange and eerie celebrity on the hustings. 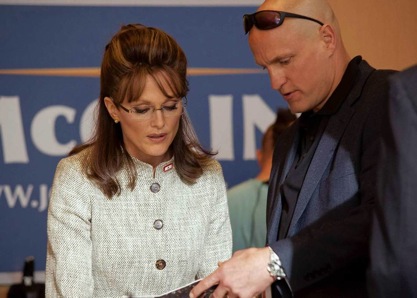 In the end, Schmidt has been stripped of his innocence. The naïve conservative idealism that led him to jump into the middle of McCain's chaotic enterprise (against the wishes of his wife) had been hardened into a numbing realism. "That wasn't a campaign," he utters in a Phoenix bar as the walls of the election were crashing around him, "it was a bad reality show..."

And that's the larger lesson of Game Change. Forget whether or not Sarah Palin suffered through some sort of psychological breakdown during the campaign -- it is depicted as though she did in the film -- the bigger issue is how can the United States best select its leaders when celebrity packs more electoral cachet than experience or political courage?

Near the end of Game Change, senior advisor Nicolle Wallace (played earnestly by Sarah Paulson), encounters Schmidt on Election Day. There are tears in her eyes. She informs Schmidt that she hadn't voted in the election, quite clearly because of the horror of Palin's performance on the campaign trail. It's a profound and stunning acknowledgment -- and for all the interviews I conducted, the first I had heard of it -- and it provides a troubling denouement for the film.

Schmidt, above all others perhaps, has understood the resonating impacts of the Palin candidacy. In what were largely overlooked remarks at a recent forum on the 2012 election sponsored by The New Yorker, Schmidt acknowledged that Palin has had a "destructive impact" on both the tenor and substance of the American political process:

I think that she helped usher in an era of know-nothingness, and mainstreamed it in the Republican Party to the detriment of the conservative movement... And I think her nomination trivialized American politics, and had a lot of results that I'm not particularly comfortable with. And, of course, you know, I had a very personally difficult relationship with her during the campaign. But it was a mistake. There's just no two ways about it.

Game Change serves as Steve Schmidt's confession. The film reveals Palin for what she is: intellectually dysfunctional, psychologically imbalanced, and most importantly, politically polarizing. Near the end of the film, Schmidt emotionally apologizes to McCain: "I'm so sorry that I suggested her."

The film, however, is also a condemnation on the underlying political calculus that resulted in Palin's selection. "There are too many of the political advisors," Schmidt acknowledged at The New Yorker forum, "who were looking at this through the prism of 'how does this help us win the election?' as opposed to 'is the person fit for governing?'" Hopefully the Republican strategists and advisors soon to be making a similar decision will heed the larger and more cardinal lessons of Game Change.

Award-winning writer and filmmaker Geoffrey Dunn's best-selling The Lies of Sarah Palin: The Untold Story Behind Her Relentless Quest for Power was published by Macmllan/St. Martin's in May of 2011 and will be published in paperback this May.