"Game of Thrones" deaths are nothing unusual and fans are used to losing some of their favorite characters, including ones who are still alive in the books. But Season 5's penultimate episode, "The Dance of Dragons," killed off someone that never should have been in harm's way, and thus made one of the show's heroes incredibly unlikeable. Let us mourn.

Here's what happened in Season 5, Episode 9, "The Dance of Dragons."

Stannis sacrificed Shireen Two episodes ago, Melisandre presented Stannis with an ultimatum: sacrifice his daughter Shireen to the Lord of Light for her King's blood, or risk losing to the Boltons. Few of us ever expected Stannis to even consider harming his child, especially after he had a heart-to-heart with her earlier this season. 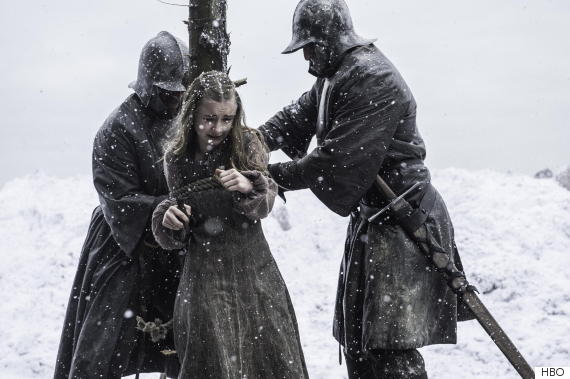 But Stannis proved he was merely a heartless ruler, thirsty for the Iron Throne at any price. He tricked Shireen into helping him, then stoically watched Melisandre burn her alive at the stake. While we didn't see her burn, her shrieks and screams were just as harrowing and disturbing. (Let's also not forget that in the books, Shireen is still alive.) It was sick and cruel, and Twitter was not having it:

Okay, this is quite possibly the most screwed up thing that this show has ever done.

Do Dan & David want to lose all their viewers?? #GameOfThrones

This show is an endless nightmare. #GameOfThrones

And Stannis clearly lost some supporters:

So much for #TeamStannis anyway

Welp, that's one less person you can root for on Game of Thrones.

But alas, we must move on. The episode ended with an epic showdown and ...

DRAGONS! Well, technically just one dragon, but still. Drogon showed up to the fighting pits and saved Daenerys, Tyrion, Daario, Missandei and the Unsullied as they were being attacked by the Sons of the Harpy. Epic is too much of an understatement to describe this final scene. Drogon flew around the stadium, burnt the rebels to crisps and then roared in his mother's face before giving her a cute nudge. 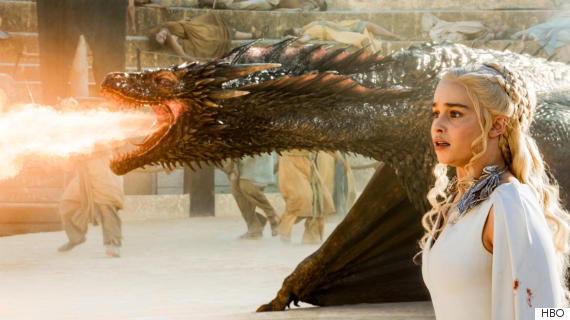 Dany finally climbed atop her dragon's back and flew away "NeverEnding Story"-style. It was amazing -- but probably would've been much more enjoyable had a little girl not just been murdered -- but that's "GoT" for you.

Arya saw Meryn Trant One of the names on Arya's kill list, the abhorrent Meryn Trant, finally arrived in Braavos. Meryn proved to be even more repulsive than anyone (second to Ramsay, of course) when he visited a brothel and requested a young girl, like a really young girl. Arya, please kill this awful excuse for a human ASAP.

Jaime was met with mercy in Dorne Doran Martell seems to be a pretty reasonable guy. After Jaime and Bronn snuck into Dorne two weeks ago, the Prince of Dorne decided to let Jaime take his niece daughter Myrcella back to King's Landing. Jaime isn't totally safe yet, though. While Ellaria Sand showed support for Jaime and Cersei's relationship, it would be surprising for her to let the Lannisters go free without seeking revenge for Oberyn.

Jon Snow returned to The Wall Jon and the Wildlings arrived back at The Wall, but his fellow brothers, especially Olly, weren't thrilled to see him. Worried about Jon? Yeah, us too.