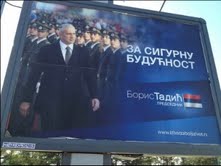 Every time I come back to Belgrade, my hometown, I fear what I might see and hear with my own eyes and ears.

In the new, soft, homogenized power of the pro-European president Boris Tadic, the Serbian press is eerily uniform in the many things it does not say. Eastern Europe is strangely devoid of turbulence.

Serbia, this notorious nation of seven million once infested with war criminals, has become just a small EU border state. Serbia struggles to cope with United Europe bureaucratic standards, complains against corruption, endures its local moguls, takes mournful notice of the brain drain, and has finally noticed that its birth rate is catastrophically low and its once-furious population is growing ever older.

When you land in Belgrade, which Le Corbusier described as the ugliest city on the prettiest site in the world, the globalized surroundings of the airport look pretty normal.

Then you start seeing strange differences. The presidential candidates for the forthcoming general elections on May 6th seem to be dressed in clown makeup. Imported campaign experts have laid on the Photoshop with a heavy hand, an effect rendered weirder by the Cyrillic fonts.

From the bus, I witness a very angry derelict with a beard and jeans, scavenging through the garbage bin. He's picky about it, upset with what's on offer, with the wrath of a consumer unhappy with the store shelves. He picks up a can, smells it, and throws it violently against my bus as it rolls past.

Nobody in the bus seems to mind: after all, it's a sturdy new bus, with high tech RFID bus cards, as if we were living in London: Big Brother is tracking everything, including the barcode on the smashed can!

In the downtown Republic Square, a political rally is held: blaring music, a forest of Serbian flagpoles, loudspeakers and loud audience: this proves it must be the rightwing nationalists, the Radical Party, the strongest opponents to the ruling democratic technocrats in power. 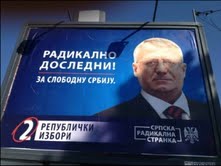 The Radicals used to be the underclass of working poor, soccer hooligans, warmongers, racists, gay-bashers and ethnic cleansers. Now that their best-known leader is behind bars in The Hague, they have changed their name into the "Progressists" and grown pro-European.

With their Radical make-over, they are visibly stronger and also more popular, yet unwilling to take over any power and run the official government. That is the paradox of a mafia governing from shadow -- daylight makes it impossible to get their usual work done.

The Radical party, to show some willingness to try to manage big towns, just hosted the ex major from New York, Rudy Giuliani. Giuliani was happy to offer some advice on cleaning up Belgrade, although the U.S. ambassador in Belgrade hastily assured everybody that US policy isn't backing the Radicals -- a group whose street-toughs set fire to the US Embassy, not long back.

The ruling democratic party offers the voters its consistent, sensible, good-boy candidate: the darling of the western powers, Boris Tadic. If Tadic does not win again, Serbia will be in trouble, at least if trouble means a failure to join the civilized world.

Maybe in trouble, or maybe not. The civilized world is changing as quickly as Serbia these days, and now it's Europe and the euro's turn to fall apart. In the EU worst-case scenario, Serbia may become a place of aid and shelter for European refugees!

In this part of Europe, the semantics are scrambled: simple words such as democracy, Europe, right, left, Serbia, never mean what they do elsewhere. A banker, famous for corruption troubles, is now a political candidate who is playing a rock guitar against corruption. The hardcore minister of the police is singing turbofolk songs onstage with a belly dancing pop star. The pro-western candidate is promising a horde of Russian investors for Serbia. The well-known mayor of Belgrade, appearing on election billboards, has the Photoshopped face of a mutant.

An ex-undertaker, now a candidate for president, wears girlish white face-powder and a creepy little smile. The independent online magazine, on verge of economic collapse, accepts big money to advertise the campaign of their worst political enemies.

Political billboards resemble the local HBO advertisements for The Game of Thrones: huge, confusing and otherworldly!

Recently an international Internet festival, "Share2″ was held in downtown Belgrade. Here the local geeks joined hacker-world celebrities in their politicized hacktivist protests against intellectual property, Facebook, Disney, Sony, Google, Apple and most any other authorities. Locals proposed the founding of an Internet Republic, in eager solidarity with Wikileaks, Openleaks, Transhumanists, the Pirate Party, you can name it!

Only meters outside the hacktivist festival, the new ultra-rightist movement, the "Gates," were demanding complete bans on Albanians, urging further ethnic cleansing in a Serbia-for-Serbians only, and angling to become a legal party with seats in the Serbian parliament. It takes a lot to make the Radicals look like a party of good taste and good sense, but the Gates are managing this.

My friends in Belgrade are confused: many don't want to vote because they can't understand any connection between their voting and any actual government policy. Nobody directly crushes basic human rights, as in totalitarian days; instead the laws are usurped, or ignored. All the best intentions of reforming activists have brought people to this new era of apathy and confusion, where every party in power follows the same routine. They loot the state, and those out of power threaten violence; until they themselves get in power, in order to get their own chance to loot.

The streets are cleaner, the shopping malls are bigger, there's a new, fancy bridge over the big Blue Danube, the night clubs splash booze on the boats, there's excellent cheap food and the people are friendly to an increasing mass of visitors. Belgrade's becoming a globalized party town, but the republic's gone missing.

The "transition to nowhere," that decade-long period after the fall of the dictator Milosevic in 2000, has come to an end. Belgrade's no longer "transitioning" any more than anybody else.

In this no man's land, the people's hero is not a soldier, a politician, or a dissident reformer, but Novak Djokovic, the world's number-one tennis star. Novak Djokovic is on billboards everywhere, far more than any mere president, hustling, yelling, smiling, raising the Serbian three-finger salute and smacking the world with a tennis racket. He's the one guy whose billboards are never defaced: Nole, Djole, Djoker; The Joker Rules! 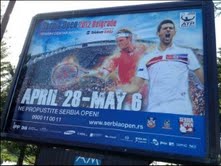