It finally happened, the awful Sansa Stark scene that we'd been expecting, speculating over and dreading for months. Sunday night's "Game of Thrones" was a difficult episode to watch for many reasons, but mostly because the Stark girls can't catch a break.

Here's what happened in Season 5, Episode 6, "Unbowed, Unbent, Unbroken," and obviously, major spoiler alert if you haven't seen the episode:

Sansa is raped by Ramsay Poor Sansa Stark has had a tough life, but the trials are seemingly never ending for the Stark girl. Sophie Turner let it spill last year that she filmed a "super, super traumatic" Sansa scene this season, which ended up involving Ramsay on Sunday night, to no surprise. After marrying the awful Bolton boy, Sansa was forced to strip naked and let Ramsay violently consummate their marriage, as Theon AKA Reek was ordered to watch in the corner of the bedroom. For the record, this doesn't happen to Sansa in the books, but instead to "Fake Arya," making it even more harrowing to watch.

Arya picks out her new face Things got very eerie in the House of Black and White when Arya discovered where all those washed bodies go -- in a room full of faces. After Jaqen repeatedly whipped Arya for falsely recounting her life story (another Stark scene that was hard to watch), he finally decided that while she may not be ready to become "no one," she is ready to become someone else. So which face will Arya pick?! We may not recognize her at first in the next episode, so be prepared.

Tyrion almost has his manhood sliced off Tyrion and his not-so-traveling-companion Jorah get captured by a group of slavers led by newcomer Malko, who then wanted to cut off Tyrion's penis to sell it, believing it to be magical. But being the fast-thinking persuasive Lannister he is, Tyrion argued that no buyer would know it was a "dwarf cock" if he wasn't present to show evidence for it. Then Malko said the most "Game of Thrones"-esque sentence ever: "The dwarf lives until we find a cock merchant." (Those exist? Guess so.)

Littlefinger keeps on scheming No one has more of a plan in the Seven Kingdoms that Petyr Baelish, who has all of his evil machinations and selfish manipulations mapped out perfectly. He arrived in King's Landing to serve up Cersei a nice plate of shade and told her that he'll get his Vale soldiers to fight for her if she makes him Warden of the North.

Loras and Maergery are in big trouble Things took an ugly turn for the worse when the Faith Militant brought Olyvar, the brothel prostitute who slept with Loras, into the trial against the Tyrells. He revealed that he slept with Loras and described the birthmark on his thigh, and added that Maergery walked in on them. Basically both the Queen and her brother are seriously screwed since King's Landing is very rampant with homophobia, and naive little Tommen can't do a thing about it. 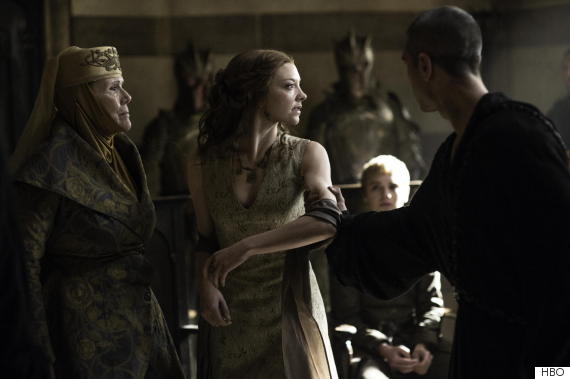 Jaime fights the Sand Snakes Finally, we got to see the Sand Snakes in action as soon as Jaime and Bronn were spotted in their blood-soaked Dornish attire. The two held their own as Oberyn's bastard daughters cracked their whips and spun their spears, but now Jaime is in the hands of Doran Martell and we have every right to be worried. (Side note: It was kinda awkward when Jaime caught his daughter kissing Trystane Martell, but then she was all, "Oh hey Uncle Jaime, I don't understand." No girl, you really don't.)