Winter is here, and so are a heap-ton of accolades for “Game of Thrones.”

Seven hells! The show has a ridiculous 22 nominations heading into the 2018 Emmys for its work in season seven, so to find out how that happened, we turned to visual effects supervisor Joe Bauer, who we’ll call the Father of Dragons (CGI versions, anyway). He explained to HuffPost all the disturbing, fiery and icy behind-the-scenes secrets that go into bringing Westeros to life.

7. There’s a reason “Game of Thrones” deaths look so disturbing: They’re based on the real thing.

Sometimes research on “Game of Thrones” involves looking into stuff you probably don’t want in your browser history.

“I’ve killed most of the bad guys and even some of the good guys. I killed Ramsay with the dogs and Joffrey with poison and had to do profound research on chemical poisonings, and that sort of thing,” Bauer explains. “So all the bloodshot, bugged-out eyes, all of the explosion of blood veins in the skin, the pus liquid coming out, all of that is based on reality.”

That kind of info could almost make you feel bad for Joffrey. Almost. This slapping GIF is completely justified, however.

Our Father of Dragons said that it’s all been researched down to “cleaving people in half,” but the most disturbing part for him was figuring out how to make undead horses.

“The hardest research to do was for the horses the White Walkers ride, because seeing any injury to an animal is so offensive to watch,” he said. “With ‘Battle of the Bastards,’ as you might remember, they’re colliding and flipping over and becoming very injured in that sequence, so we had to search out footage of that sort of thing happening to real horses. It really was awful to watch, but it’s part of the job.”

6. The effects team looked at footage of 9/11 while researching how the Wall should come down.

“We knew it was going to be a task,” Bauer said of bringing down the Wall in the season seven finale. That particular feat involved teaming up with a frequent partner, Montreal-based Rodeo FX, and fine-tuning countless details, from how the ice would shatter to the erosion on the Wall from the ocean.

“Over the eons, the ocean water would’ve eaten away at the bottom” of the Wall, Bauer said. “The way the ocean waves crash against it would eat it away. It would freeze, thaw, freeze, thaw.”

“[The Night King and Viserion do] a number of strafing passes to weaken it, then he concentrates on a single area to cause a structural collapse, like the concept for dropping a big building,” Bauer said. “You weaken the main part of it, and then the rest of it is sort of a chain reaction. So we established that weak part is close to Eastwatch Castle, and then [with Rodeo], we spent months doing sims to try to get the scale, the weight and the size of it and the right amount of fragmentation.”

“Unfortunately, there’s the same old 9/11 footage that’s been researched so many times, but I think that’s pretty much the largest structure anyone’s seen come crashing down, so we had to look at that and see what’s hanging in the air versus all the material that’s crashed and spread onto the ground on both sides,” he said. “Then we had to figure out how to leave an open space for the army of the dead to walk through, because there would be so much rubble that really it would just be another wall, so we had a lot of it fall into the ocean. It’s just trying to do it in a way that would be physically correct.”

Ice Viserion was originally going to have “some of the features” of the Night King, said the Father of CGI Dragons.

“We had to take it further digitally and add sort of an ice layer and give him sort of an icy translucence,” Bauer explained.

He later added: “We used one of the dragon models from season six, where Tyrion goes down and unlocks the dragons and they haven’t been eating, because they’ve been away from Dany and they’re rejecting food. We got them quite emaciated and skeletal, and we thought that would be a neat look for Viserion.”

The idea didn’t work out exactly that way in the end because showrunners Dan Weiss and David Benioff thought it was a bit too fantastical. Instead, Ice Viserion got some other undead inspiration.

“I gave the animators the idea of copying ‘Nosferatu,’ which is a German vampire movie predating ‘Dracula,’ and so with the shoulders up and the head down low,” Bauer said. “It’s sort of like a spider with the limbs coiled in and sort of restricted and not very supple in their movements. Very much like a dry spider, is sort of the way I described it. So when you see Viserion flying or attacking, his shoulders are high and then his neck is low. His limbs are drawn in, as if [in] rigor mortis.”

4. The dragons have inspiration from New Zealand’s Maori warriors.

Bauer wasn’t always the FOD (Father of Dragons). He joined the show in season three and wanted to make the dragons more aggressive, so he went down a photo research path looking at Komodo dragons, toads, lizards, bats, eagles, owls ― anything and everything. But animals weren’t enough.

“They are dragons, and they’re not just lizards. So you want to give them other capabilities,” he said. “I was looking at the Maori warriors, and it’s become popular in high schools, where the players will bug the eyes out, stick the tongue out and really look horrifying. I wanted to give that quality also to the dragons when they go into attack mode.”

“We worked really hard with a German company, Pixomondo, who developed that with us, and did exactly that, pushed the teeth forward like a great white shark, bugged the eyes,” he said. “And then we also extended the fins out, which is something very common in nature, the threat pose.”

As the dragons got bigger, it was important to keep them proportional. But even with the right proportions, a real-life Drogon would have a hard time getting off the ground.

“We have sort of an expert dragon designer on the team. His name is Dan Catcher, and he doesn’t only design dragons, but he has a very logical mind about what grows larger, what stays smaller, the physiognomy to hold them aloft. He swears a dragon as big as Drogon could never take flight,” Bauer said, “just because of the mass required to hold him up.”

That, Bauer said, is why you often see Drogon take off from a cliff’s edge, and why he takes a running start when escaping the Night King in season seven. Drogon taking flight is “sort of like the movie ‘Flight of the Phoenix,’” he said, where you don’t know if the plane is going to work.

Describing Drogon’s cumbersome takeoff during that Night King escape, Bauer said, “Dan and David had written there were seven characters on his back, so we had a visual reason why it was so difficult, but it adds to the drama.”

2. Some of film’s most iconic skeletons slyly made an appearance.

From “The Princess Bride” to “Lord of the Rings,” “Game of Thrones” goes through more references than Jon Snow does bottles of hair conditioner. Bauer explained one particular homage in the season four finale, “The Children.”

“Dan Weiss and David Benioff told us that they actually dangled it in season three, and said, ‘Hang on to this, in season four we’re going to be doing [Ray Harryhausen’s] skeletons,’” Bauer said.

Among the most iconic characters created by visual effects master Ray Harryhausen are the skeletons coming out of the ground in the 1963 film “Jason and the Argonauts.” It’s a scene mirrored when the wights attack Bran and his buds in the season four finale. (R.I.P. Jojen.)

The final results were achieved in different ways, with Harryhausen using stop-motion and “Game of Thrones” using stunt people in green suits and decayed-looking costumes. But, Bauer said, “when it came time to do the wights climbing out of the ground, we homaged the heck out of it. Our techniques were different, but our designs were similar in that they were very aggressive.”

1. Were those really Jon Snow’s buns in the finale? You butt they were.

The FOD explained at length the various secrets in the show, but there was one the world still needed to know.

Was Kit Harington using a double in the season seven finale when Jon Snow finally gets together with Khaleesi? Or did the show really reveal the King in the North’s southern borders?

“Kit has a very chiseled body, and as far as I know they never used a body double for him,” Bauer said.

Welp. That’s how to get to the bottom of it. Khaleesi don’t want none unless it’s real buns, son.

All hail the King of the Squats! 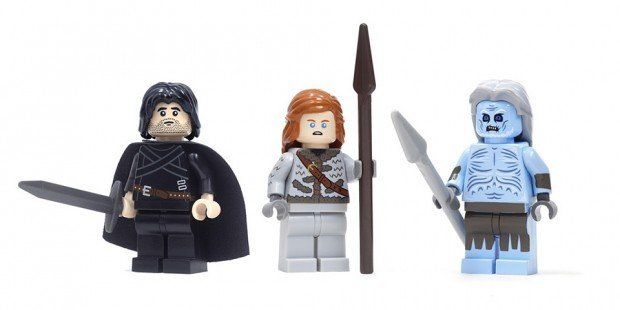