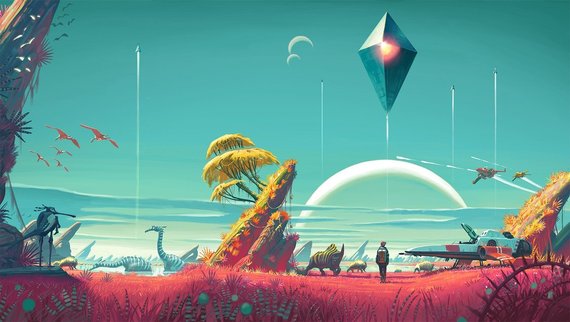 Over 170,000 pre-orders in North America alone, 212,620 gamers simultaneously online on its very first day; spotless reviews from some of gaming's biggest, over fifty award nominations. Need I say any more? Well, since it is a review, I guess I have to. In case you've been living under a rock on Mars the last few years, No Man's Sky is a procedurally generated sci-fi space exploration game with a near-infinite universe and 18 quintillion planets to explore, created by a tiny developmental team of 15 people called Hello Games. The game is one of the biggest releases on PlayStation 4 this year, and is very close to being the most innovative game of the decade. The reason? Its size. The universe of No Man's Sky is a sandbox filled with eighteen quintillion planets to explore, each with its distinct terrain, flora and fauna. And yet, there it sits on my hard drive, occupying a mere 5 GB of space. For a game that huge in size, you'd imagine for there to be many bugs, glitches and issues. And yet, in my 20 hours of playthrough, I never encountered a single awkward situation, no flying land dinosaurs, no sudden crashes, no creatures popping into the distance out of nowhere. While others have reported a few minor setbacks here and there, the developmental team is working 24 hours to fix it.

There have been many space exploration games in the last few years. We have Eve Online, Starbound, Elite Dangerous and many more. Each of them boasts a huge fanbase and several hours of time to invest into. And yet, none really interested me. The reason is, I am not a fan of sci-fi. My unreasonable dislike for this genre has kept me from playing massively successful titles like Rocket League, Wildstar, Rachet and Clank and even Overwatch. That's perhaps one of the reasons why I was initially bent on staying away from No Man's Sky. As thrilling as the idea of exploring the infinite space in a highly advanced starship may sound, it was never really my cup of tea. But when Sony asked me to give the title a try for my blog, I somehow changed my mind. Boy! Am I glad I did!

You see, No Man's Sky isn't just a space exploration game. It offers breathtaking visuals, haunting gameplay, fast-paced action, groundbreaking exploration, satisfying crafting and a really commendable economy system, all rolled into a single package. Exploration is obviously the primary part of the game, finding precedence before storyline and gameplay, but that doesn't mean it is any less on those fronts either. You're not asked to follow a scripted path that takes you over and over through the same crowded corridors. Instead, you are left with a sprawling universe no one has ever been to before, free to tell your own story, just the way you like it. Will you choose to follow the almighty Atlas? Will you make reaching the center of the universe your ultimate goal? Or will you rather just give all that away and find your own path to excitement and adventure? Even with several hundred thousand people online simultaneously, the sheer size of the sandbox means that you'll probably never go to a planet or star system that anyone has ever set foot on before. This gives you the satisfying power of being able to name each and every one of your discoveries, as well as leaves you with the haunting truth that no other man will ever know of your exploits in the vast outer space.

Exploration isn't everything though. Secondary to that is resource gathering, scavenging for metals, fuels, isotopes and oxides to help provide for the tools that you need to travel the cosmos. Of course, you won't need everything you scavenge, and not everything you need will be available for the taking. This brings us to the next element of importance, trading. Trade with galactic terminals and fellow NPC explorers to acquire the goods you need and get rid of the ones you don't. Money will also help you upgrade and acquire new ships, purchase inventory slots, craft new technologies and upscale your spacesuit. While doing all this, you'll find yourself running into a space pirate, a sentinel drone or a vicious carnivore every now and then, forcing you to resort to air and land combat. The way all these features are integrated into the game in an inter-dependent fashion is sort of amazing, meaning that you can do more of what you love, but you must still have a go at every element the game throws at you to survive.

Hopping from planet to planet and documenting new locations and species can be a daunting task, which is why you have your multi-tool, a handy space-gun/analyzer that helps you go through your life as a spacefarer. Each planet that you encounter will be different, with its own signature environment that will make it hard for you to survive. You'll meet and document many amazing animals and plants, some harmless, others predatory. You can even feed these animals and watch them poop out rare trading materials! Each planet and its life forms are procedurally generated, meaning you will see a fair variety of things in the world. For example, players discovered a stunning 10 million different species of animals on No Man's Sky on the very day of release, more than there have been currently documented on Earth!

The game is currently a little more dependent on resource hunting than I'd like. You cannot possibly leave a planet without at least mining yourself some iron or carbon, since you know they'll come in handy. Mining can also be interesting and exceptionally rewarding though, as you'll chance upon certain planets that are nothing but a vast gold reserve, allowing you to get pretty rich pretty fast. Mining is essential to support other necessary activities like refueling your starship, crafting new technology and trading for goods.

Meanwhile, hunting animals is less exciting than you would currently like, but keep in mind that this isn't Monster Hunter Online. However, Sean Murray of Hello Games did reassure me that the game is constantly in development and new features will be implemented on request. This means that we can certainly keep our hopes up for some adrenaline pumping coop hunting in the near-future!

Dumb creatures aren't the only thing that you'll encounter while travelling the skies though. There are several other intelligent lifeforms, such as the Korvax and the Gek, who will help or hinder you throughout your adventures depending on how you establish your relationship with them via choice-based conversations in a classic role-playing fashion. Making the right choice can be difficult though, as the aliens speak languages different from your own, and you must first master those to understand what they say.

As I spent my hours leaping about and travelling from planet to planet, I could not shake off that feeling of being utterly alone, although a few alien faces here and there did help lighten the load and keep the experience constantly entertaining. Meanwhile, alone doesn't necessarily mean safe, as most resource-rich planets you encounter will be covered with sentinel drones, which will attack you at the slightest sign of hostility. There will also be non-combatant threats, such as radiation and toxicity, which can only be avoided through upgrading your suit.

It will take you at least a couple ten hours to get used to the gameplay, but once you have, the game will in no way feel mundane or any less challenging, as the elements are integrated in a rather addictive fashion, with the promise of always being able to explore further. There is also a Dark Souls-like death system, where you lose all your inventory upon death, which can only be recovered at the location of death. However, should you die again without reacquiring your inventory, it is lost to you forever. The game isn't frustratingly challenging though, just enough to keep things adventurous.

When development started, No Man's Sky was a niche title meant for sci-fi fans only. However, it has since developed into a massive experience that accommodates for everyone. If any of the things that I mentioned sounds like something that will get you interested, do give No Man's Sky a try. It is available for purchase on Steam and the PlayStation Store. And oh! Watch out for the Easter Egg moments!

P.S. There's a great discord server out there that lets you chat with other No Man's Sky players. The mods have been working very hard on this new community. What do you say we give their subscriber count a real boost? Meet, Chat and Play on Discord.