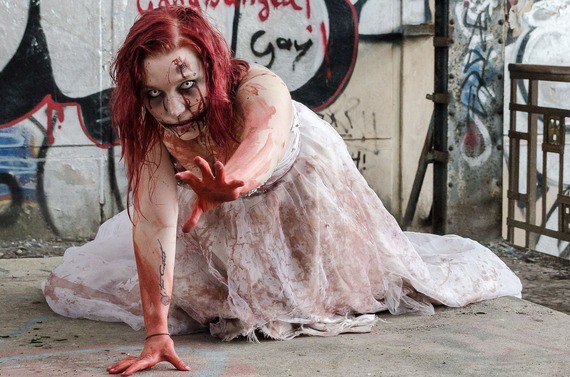 If you've watched The Walking Dead, you probably already know that the real danger in a post-zombie-apocalyptic world isn't the zombies. It's the people.

This theme echoes through the show's later seasons, where most of the compelling drama comes from main characters meeting other potentially dangerous/potentially helpful groups of survivors. These plot lines are rich with strategic tension. Should Rick and his friends hunt down the people of Terminus, or let them go? Is there a way to live with the Governor after his crimes? Can Diana be trusted? Should Carole be forgiven for killing sick group members?

Game theory is a branch of mathematics that can be used to understand strategic interactions between humans. Game theorists break down strategic scenarios into simple models that provide insight into human behavior. Sometimes these models provide surprising answers. Below I use game theory to analyze three of the most strategically compelling scenes in The Walking Dead.

The Scene:
In the Season 3 episode "Clear", Rick, Michonne, and Carl discover a heavily booby trapped street while making a supply run. It's obvious that a survivor is living there. He has covered the streets in notorious warnings -- "Turn around and live", "Away with you", "Not kidding you". He has also set up a bunch of zombie-traps with live critters as bait.

The Breakdown:
The question for Rick is: should they heed the warning? Another survivor might have supplies or information, which could be critical for their group. On the other hand, the survivor might attack them (or trap them for a human-meat BBQ).

In order to model this game theoretically we can boil Rick's choices down to either 1) proceed or 2) leave (obviously there are variations on either of these, but to understand the underlying strategic scenario, we need to abstract away from the details). What should he choose?

To figure it out, Rick needs to first consider various possibilities for the survivor. Either this person is dangerous, or not. If he is actually dangerous, it would be better to leave. If he isn't, it would be preferable to seek him out. But the information they have about the survivor -- a series of threatening signs, and some foreboding booby traps -- is inconclusive. A truly dangerous survivor might write a bunch of threatening messages, but a vulnerable survivor who didn't want to be taken advantage of might do the same thing to frighten off attackers. Rick seems to be at an impasse.

One way to figure this out is to use something called costly signaling theory. The idea behind this is that sometimes signals from one person to another have costs. If so, you can expect that only those people who can afford the costs will send the signal. A college degree in physics, for example, might not be necessary for a corporate job, but it is a trustworthy sign that the person holding it is at least somewhat motivated, intelligent, and hardworking. This is true because there are costs associated with getting such a degree that stop certain people from doing so.

How does this apply in The Walking Dead case? We can think about the survivor's signs and booby traps as signals he is sending to those who pass by. And these signals are arguably costly in the right way. In a zombie apocalypse it isn't easy to gather supplies, build booby traps, write signs, catch little creatures, and dispose of trapped zombies. Rick and the rest should take these things as trustworthy signals that the survivor is at least somewhat dangerous. And, if so, Rick, Michonne, and Carl shouldn't risk trying to meet the person.

They do risk it, of course. And, in the process, nearly get smoked. No one said the characters in The Walking Dead were good game theorists.

The Scene:
In the season 4 episode "Too Far Gone", Rick and the gang are living safely in a prison, surrounded by a fence. The Governor, a creepy former foe, has rallied a group of followers to try and take the prison for themselves. This group has captured two of Rick's friends, who they are threatening at gun-point, and has also rustled up a tank, which is pointed at the prison. Rick and the rest are given a few hours to clear out, or risk the consequences.

The Breakdown:
Obviously Rick's group prefers not to leave their safe haven. On the other hand, the Governor is issuing threats that they like even less. What should they do?

First, let's look at what options the people involved have. Rick's choices boil down to some version of 'leave' or 'don't leave' the prison. The Governor's choices, given what Rick does, are to attack the prison and kill the hostages, or not to. We can use this to draw a diagram representing all the possibilities in this game. 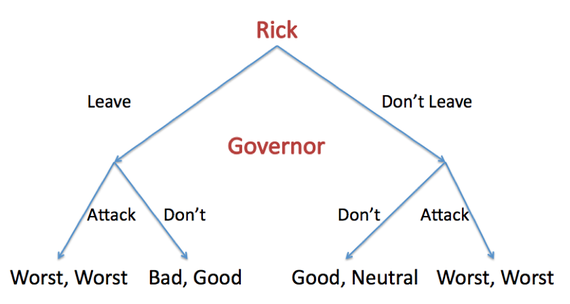 Rick chooses first between leaving or not. Then the Governor picks whether to attack or not. On the bottom are all the possible outcomes, with Rick's listed first and the Governor second. We can use this tree to work backwards and figure out what we expect people to do in this situation.

Whether or not Rick leaves, attacking will lead to terrible outcomes for both groups. People on both sides are guaranteed to die, and likely the prison will be destroyed (seeing as there is a tank pointed at it), making the entire gambit pointless. So, if the Governor were being rational, he would choose not to attack, no matter what Rick does. Then he either gets the good outcome of taking over the prison peaceably, or the neutral outcome of going back to his old encampment.

This means that if Rick is being rational he should expect the Governor to back down. Which, in turn, means that Rick can safely do what's best for his group by not letting the Governor into the prison. In other words, the game tells us that the Governor's threat isn't credible. If his bluff is called, he should back down.

OK, but here is the thing about the Governor. The guy used to keep his zombie daughter in the closet and brush her hair. He also used to have a room full of chompy zombie heads in fish tanks. And he fed his ex-girlfriend to her ex-friend who had become a zombie. In other words, there is no reason to think the Governor is a reasonable sort of person because he has a history of doing things that are straightforwardly dangerous or bad for him.

At the heart of game theory is the assumption that people rationally do what is in their best interest. When this isn't true, your opponent just isn't predictable in the usual ways that people are predictable, and you can't use game theory to figure them out. Given the enormous stakes in the scenario at hand, Rick should do whatever possible to minimize the chances that the Governor attacks. The safest bet is probably to clear out quickly and hope for the best.

This is an example of a weird phenomenon in game theory where being known to be unpredictable or irrational can actually benefit you. It makes threats credible that otherwise wouldn't be. In a bargaining scenario, you can actually get ahead by convincingly showing the other person that you are unhinged. Of course, you need to be willing to commit acts that actually convince others of this.

If you don't watch the show, want to know what happens? The Governor just randomly hacks the head off of one of the hostages while negotiating, and everyone opens fire. Almost everyone in both groups dies, and the prison is wrecked and overrun with zombies. The Walking Dead, man.

The Scene:
During the season 6 episode "Coda", Beth is being held at a secure hospital by a group of survivors and their fascist ex-cop leader Dawn. Beth has tried to escape once, unsuccessfully, though her friend Noah did manage to get out. Rick and the group are hoping to free her.

The Breakdown:
Dawn has no reason to release Beth. She wants her in the hospital, and the compound is carefully guarded by armed and trained ex-cops. Rick and his group recognize this and start negotiations off with a bang by kidnapping two of these cops and offering Dawn an exchange of prisoners.

We can think of each side as having essentially two choices. Dawn can either release Beth or not. Rick, on the other hand, can either release the hostages to the hospital, or he can harm them in some way. (It isn't likely that Dawn would harm Beth since Beth has been living with their group for months and Dawn likes her, so we can assume this is off the table.) 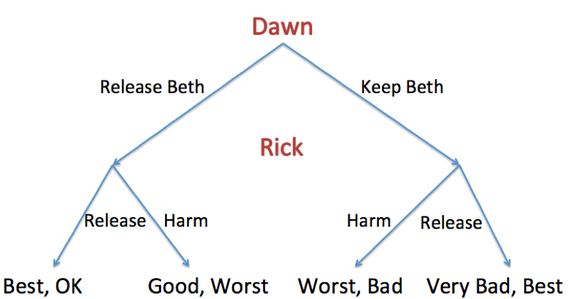 But, again, things are somewhat more complicated. Rick has already said that he is going to make his choice based on what Dawn does -- release if she does and harm if she doesn't. He has openly committed himself to only the paths in red below.

Dawn's options, then, are to either get "OK" for releasing Beth or "Bad" for keeping her. It's obvious that releasing is the right choice. This is only true, though, if she believes Rick's threat to harm her buddies. Should she?

In this case, we know that she shouldn't. Rick is a tough dude, but ultimately reasonable and fairly morally upright. He probably isn't going to slaughter innocent ex-cops. But, Dawn knows little to nothing about Rick besides the fact that he has survived the zombie apocalypse. Chances are good he has killed people, and he almost certainly has PTSD. In other words, it would be reasonable to think that Rick is the sort of guy who would carry out his threat even after it no longer benefits him. Given this, she probably shouldn't risk her officers' lives to keep Beth.

As it turns out, Dawn does the right thing and releases Beth! Of course, she then demands that her escapee Noah be returned to the hospital while dozens of dangerous people are pointing projectile weapons at each other. Beth stabs Dawn, Dawn shoots Beth, and Daryl shoots Dawn. WALKING DEAD.