"I've never seen the kinds of gangs, killings or viciousness like what's being said."

That's what one resident we spoke to had to say about this Wednesday's huge multi-agency gang raids that were centered at the Eastchester Gardens Houses in the Bronx. A few of us traveled up to the north Bronx neighborhood that same night to talk to people firsthand about the raid--and what had led to it. Lyssy Pastrana, a photographer, and her husband Marvin walked around with myself and a few members of Copwatch Patrol Unit as we talked to people who lived there.

Anita, 37, was walking her dog when we approached her. She was was with her kids in a park in the middle of the housing complex. She echoed what others said: that the raid was way over the top. She had lived in Eastchester Gardens here whole life and felt relatively safe there. Another young mother who had moved to Eastchester from the shelter system couldn't even name any of the gangs that the newspapers were reporting were running wild throughout the the housing development. 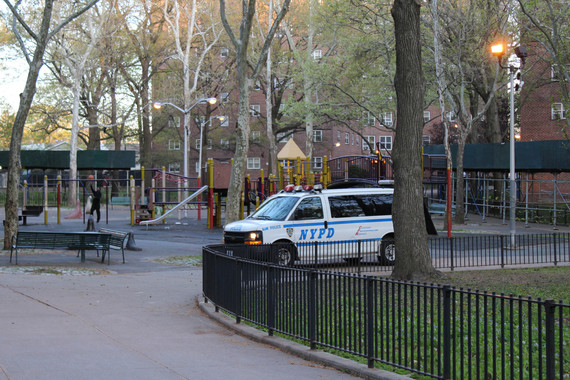 A police van sits in the middle of Eastchester Gardens hours after the raid. (Photo: Lyssy Pastrana)

A reported 120 alleged gang members had been were arrested, surpassing the 2014 raid in West Harlem's Grant and Manhattanville Houses for the biggest in the city's history. One man even fell to his death from a building as he ran away from cops. Since the shooting death of police officer Randolph Holder last October, the frequency of the raids has notably increased. The Bronx saw multiple raids at the end of 2015 and the beginning of 2016, charging 84 people as recently as March. In February, 18 alleged gang members were arrested in Brooklyn. And just last week over 30 young men were snatched up in Spanish Harlem's Washington and East River Houses, where Holder's reported shooter had been living.

"I mean this neighborhood has been one of the best neighborhoods in the Bronx. It has some of the lowest crime stats of any of the projects in the Bronx," Anita told us. "You can walk around here at nighttime and feel fine. I raised four kids, two boys who are autistic, and my two little daughters. I'm not scared to come out here at night. You don't hear the shootings that you hear in other places. You don't have to worry about being a woman walking here at night. It's really not like that around here."

She also noted the the pre-dawn operation, which included over 700 law enforcement officers made up of NYPD and federal agencies, included the Department of Homeland Security. "What are you known as? A terrorist. That's what it's like with Homeland Security walking around here. Then you had FBI here, you had helicopters, all newscasters about what's going on here. Things you've never really seen here."

We walked past a playground in the middle of the housing complex and met a young couple visibly distraught by the raids. They described Eastchester Gardens as a community that hadn't experienced high levels of violence in years. "It hurts me because the raid was so unnecessary," said one 20-year old woman who asked to remain anonymous. "If they would have came here and did this 10 years ago they would've gotten a lot better results. Now they took a bunch of innocent people who were trying to change."

She started to cry as she talked about the people who were arrested, some of them her friends. Belonging to a crew, a smaller and more informal group often compared to gangs, didn't make everyone a criminal. "Everyone out here is trying to evolve in a different way. These children, and that's what they are, they're still kids, they made choices when they were younger that they thought were necessary to get them through everyday life."

The raid, carried out by federal agents in full military tactical gear with support from helicopters circling overhead, shocked and awed the community, the 26-year old man with her explained. "It gives us a feeling of 'what's next?' How should we feel about seeing all this attention, seeing all these news reports now? How should we react? What should we do as a community? That was a large part of this community," he said, referring to those arrested. "Taking people in the middle of the night like that, that doesn't make us feel any safer. They've had the chance, they've taken all these years to build up evidence. I'm sure at some point that had enough evidence to pick up some people. They didn't have to do it like this. They publicly humiliated us and it's not fair," the young woman added.

And that point is crucial. How the media dutifully reports on the prevalence of gang violence is key to what law enforcement wants to accomplish with this big show of force. In Eastchester Gardens, like Grant and Manhattanville, there were only a handful of murders but over 100 indictments. Sensationalized news reports would leave you with a different impression. As any presumption of guilt is left by the wayside as these alleged gang members are tried in the court of public opinion long before they see a lawyer, let alone a trial. 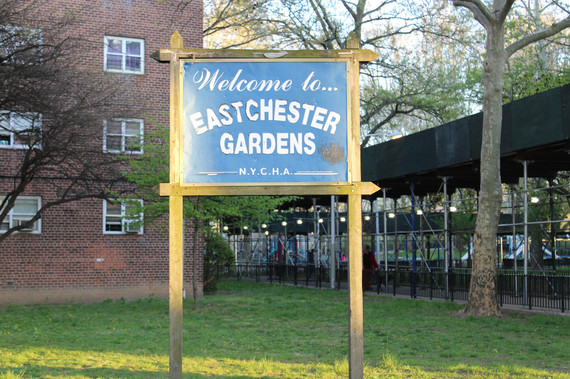 With this type of enforcement and media portrayal, we see that an addiction to the politics of the era of mass incarceration (that some suggest is beginning to end, is still strong. These alleged gangbangers are 2016's 'Super Predators', as Hillary Clinton once coined the term. They are said to engaged in "mindless violence", per police commissioner Bill Bratton, who is promising more raids in the near future. Their criminality, as police and newscasters describe it, is simply a given. And once the public has been properly frightened enough, the raids are seen as positives, as a 'cleansing' of public housing for the its own good.

For policing activists, the raids present a complex challenge. Bratton and other law enforcement officials, while rhetorically embracing a rollback of mass incarceration, have used raids to sweep away large swaths of young public housing residents. This isn't Stop and Frisk or Broken Windows per se, though there is certainly some overlap. These young men, some who may be responsible for violence, likely won't have many advocates rushing to defend them. This isn't a ready-made campaign about unconstitutional policing. A deafening silence from mainstream activists is to be expected.

However, for those willing to lend a voice of dissent, it's clear that a lot of hard work deconstructing the media hype is crucial. There also important questions to be asked as to the role of federal authorities. Bratton has said that one strategy is to "get them shipped off to federal prisons so they're not going to be able to hang out with all their buddies up in the state prisons." Highlighting the voices of families those arrested is a first step to counteract Bratton and the media. In 2014 it was the mothers of young men who'd been arrested who spoke out on public radio and the streets of Harlem. I recorded two moms, one who'd been pushed to the floor at gunpoint after police rammed her door down, as they called out city officials and a reporter who'd written a sleazy story about 8-year old "gangbangers of tomorrow."

Katherine Forts, a postal worker, was furious that her son had been indicted largely on the strength of his social media posts. She refused to accept that so many young men had been implicated in a handful of crimes: "There is no logic in this. Like I said, they want to destroy the blacks and the Latinos. They get this group here, put them in jail. The next group is done because they're either dead or in jail. They want to destroy us. They know that we're strong and that we're powerful and they don't want to see that. "

The Fallujah-esque scene in Harlem and the Bronx is just the flashy culmination of the what law enforcement brings down on these communities. The long fight these families face in court is the slow and painful process that comes next. Years of surveillance that precedes the raids provide prosecutors with what they need to make a case. Conspiracy laws originally designed to take down the mafia are used to charge these young people, some barely teens when they were first being watched and tracked. Conspiracy charges, which are easier for prosecutors to convict on, add years to the indictments. Of the 103 indictments that stemmed from the 2014 raid, 93 defendants chose to plead guilty in order to avoid the lengthy sentences hung over them.