When walking around New York City, most people often don't pay much attention to the city's darker side, blinded by the cool, cosmopolitan vibe. But beneath Gotham's glamour lurks a seedy past. Whether it was nefarious mob families running their empires from Little Italy or the vice-ridden streets of 1970s-era Times Square, the city's neighborhoods have witnessed a great deal of history. A modern-day concrete jungle may conceal the sin and violence of yore, but after taking one of these walking tours you'll see the depravity that exists behind the present-day facade. 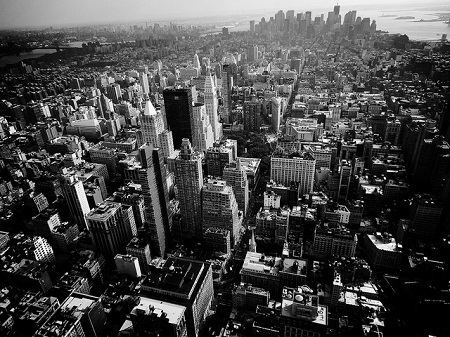 Considered to be one of America's first slums, the Five Points neighborhood in lower Manhattan borrows its moniker from the intersection of five downtown streets now part of modern-day Chinatown (the intersection of Five Points no longer exists as some of the streets have been replaced by Columbus Park and a federal courthouse). In the 19th century, Five Points was an immigrant enclave known for its rampant crime and notorious street gangs. Some of New York's most infamous organized crime groups, like the Forty Thieves, the Dead Rabbits and the Five Points Gang, originated in this former urban ghetto, terrorizing the neighborhood and rumbling with rival tribes around the city.

If you read Herbert Asbury's 1927 tome "The Gangs of New York," or saw the 2002 film by the same name, you'll want to separate fact from fiction with the Big Onion "Official" Gangs of New York tour. Meet at the southeast corner of Broadway and Chambers streets (at the edge of City Hall Park) and make stops at some of the neighborhood's notorious sites, such as "Murderer's Alley" (Donovan's Lane), Paradise Square, the African Burial Ground and the locations associated with the 1857 police and 1863 draft riots. Much of the original neighborhood has since been buried by modern development, but your tour guide will tell you all about the area's storied history. Tickets for the two-hour tour are $20 for adults and $15 for students and seniors. 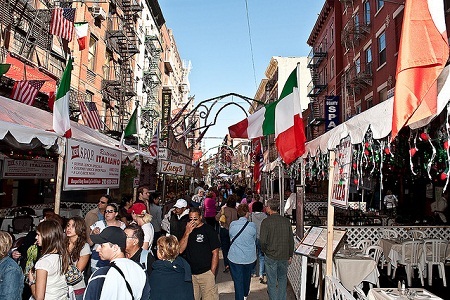 For anyone fascinated by the enigmatic world of "The Sopranos" or "The Godfather," tagging along on an NYC Gangsters Tour might be an offer you can't refuse. Though mafia history permeates many other cities across the country, it's difficult to ignore New York City's stake in mob legend -- especially with the city's claim to the famous Five Families. Meet your guide at the corner of Mulberry and Worth streets and learn about the evolution of New York City's organized street crime, from its beginnings in Five Points to its enduring presence in modern-day New York. Along the way you'll explore the Little Italy district (the fictional home of the Corleone family in "The Godfather" and the backdrop for real life dealings of the Gambino family) and Chinatown's "Bloody Angle" (Doyers Street), a legendary battleground for the Tong Gangs. As you tour some of the iconic sites, you'll hear about the mafia bosses' cold-blooded methods for handling double-dealing associates and how famed NYPD Lt. Joe Petrosino pioneered tactics to cope with the mob's ruthless rule. Tours last two hours and cost $25 per person.

[See: Where to See Cool Graffiti in New York City]

Of course, no tour of NYC's mob stomping grounds is complete without stopping at a few of the clans' favorite eateries. Graham Meats & Deli, situated in Brooklyn's Williamsburg neighborhood, serves up a spicy Italian sausage sub called "The Godfather." The sandwich's name is pretty suitable considering the deli's former owner Michael (Mike the Butcher) Virtuoso is a former accomplice for the Bonanno family who pleaded guilty to loan sharking in 2011 (he died in 2012 of pancreatic cancer). For more classic Italian fare, stay in Brooklyn and head to Bamonte's Restaurant. Not only did the restaurant provide the set for several scenes in "The Sopranos," but it also served as the business meeting spot for Anthony "Fat Tony" Rabito, one of the Bonanno family's street bosses. 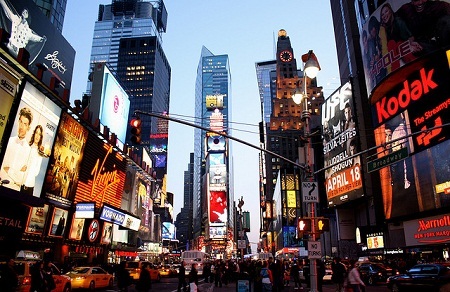 Before it underwent a Disneyfication and became the neon-lit tourist hub it is today, Times Square was an epicenter for the city's more unsavory attractions. Zoning laws passed in 1995 may have banished the area's once prominent peep shows, massage parlors, adult book stores and strip clubs to Eighth Avenue, but underneath the bright lights a seedy underbelly percolates. In the not-so-distant past, 42nd Street wasn't the tourist-friendly hive it is today -- according to the New York Times, there were nearly 100 sex-related businesses saturating the area in 1977. Before AMC and Disney's New Amsterdam Theater, pornographic movie houses lined the streets. What is now The New Victory Theater (at 209 W. 42nd St.) was once the block's only XXX-rated movie theater, known as The Victory. Ironically, it's now the city's first and only theater just for kids. Next time you're in Times Square, walk along 42nd Street and take note of the area's tamer atmosphere.

One of the country's most rebellious areas of the Prohibition era, New York City was dubbed "Satan's Seat" by Methodist Bishop James Cannon Jr. By the time the city's bars and saloons shuttered in accordance with the 1919 National Prohibition Act, thousands of speakeasies were already thriving. In 1925, it's believed that there were between 30,000 to 100,000 speakeasies operating in New York City. Though the turbulent bacchanalia of Prohibition has long since passed, you can relive the war between the "wets" and the "drys" with Big Onion's "Satan's Seat" walking tour, inspired by the 2011 Ken Burn's documentary, "Prohibition." During the walk you'll stop at John McGurk's "Suicide Hall" (a famous Bowery dive), Chumley's (a famed speakeasy on Bedford Street) and sites associated with some of the movement's most prominent personalities, including former New York City Mayor Fiorello LaGuardia and Prohibition activist Carrie Nation. Along with the sites, your guide will also detail the volatile history, roiling politics and morally ambiguous culture of '20s-era New York. Tickets for the two-hour tour cost $20 for adults; students and seniors pay $15. Meet your guide at the northeast corner of Bowery and Houston streets, in front of the iron-fenced community garden. 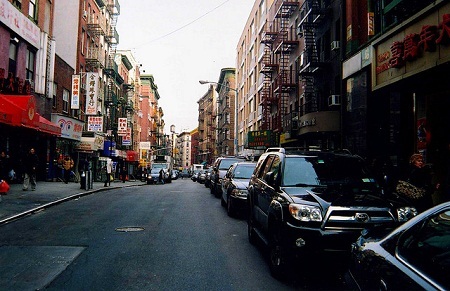 Running from Chatham Square to Cooper Square in lower Manhattan, the Bowery has managed to protect the remnants of its unsavory past, despite expanding gentrification and the threat of burgeoning high-rise apartments. Thanks to its designation on the National Register of Historic Places in February 2013, the streetscape remains a preserved snapshot into one of New York's most culturally significant districts. In the 19th century, the Bowery was sullied with brothels, saloons and pawn shops and was sacred turf for the Bowery Boys, an anti-Irish crew of thugs. By day, the Bowery Boys held upstanding jobs as printers and mechanics, but by night they set out to defend their territory from encroaching gangs by stationing members in the Bowery's alleys and saloons. Clashing most with their Five Points counterparts, the Dead Rabbits, the Bowery Boys used intimidation to advance the careers of political candidates in exchange for money.

While much of the district's ancient structures are now disguised by modern-day Chinatown, these buildings witnessed a great deal of history, and as such are worth a self-guided walking tour. Start at 30 Bowery, the former site of the once-revered North American Hotel. For politicians of the 19th century, this was the spot for under-the-table deals. It was also the site of a significant turf war between the Bowery Boys and the Dead Rabbits in 1857. Continue along to 46-48 Bowery and you'll stumble across the former Bowery Theater (now the Jing Fong Restaurant). This 3,000-seat theater was the largest in the country when it first debuted. But it didn't gain notoriety strictly for its performances; the theater was known for allowing raucous alcohol consumption and for employing prostitutes for patrons sitting in the upper boxes of the theater. For more political intrigue, head to 207 Bowery. This building served as the headquarters for "Big Tim" Sullivan, one of the city's well-known corrupt politicians of the early 20th century who offered bail money and free food in exchange for votes.

Though the mafia's Italian Americans have received a great deal of spotlight thanks to the "The Sopranos" and "The Godfather," little attention is paid to the once-powerful Jewish Mob members. They, too, ruled the streets of New York City, spreading from the immigrant slums of the Lower East Side to hold a legitimate place among their Italian counterparts. Learn about the mob's active years between 1880 and 1920 and its key players, like Monk Eastman and Max "Kid Twist" Zweifach, and see where the crime syndicate was headquartered on a Jewish Mob Walking Tour. This two-hour tour, led by the Lower East Side History Project, was created with input from the families and estates of the notorious gangsters themselves (and the American Jewish Historical Society), meaning you can count on in-depth stories and rare historical documents to go along with the sightseeing.

Meet your guide at the Landmark Sunshine Cinema (143 E. Houston St.) and visit pivotal sites of the Kosher Nostra's shootouts, assassinations and covert business transactions. Along the way you'll stop at the corner of First Avenue and First Street -- the former location of Livingston's Saloon and the site for a bloody gun battle between the Five Points Gang and the Eastman Gang. You'll also stop at 76 Second Avenue, the former address of Siegel's Café, a turn-of-the-century night club and backdoor hangout for the mob. Reserve your tickets online at leshp.org or by phone. Tickets are $20 each.

[See: The Best Things to Do in New York City]