In an uncommon display of transparency, Gap recently disclosed that it pays men and women equally for equal work.

Exponential Talent, a consulting firm that specializes in workforce diversity, analyzed a dataset of pay information for Gap's 130,000 employees around the world and found that there is "no significant gender wage difference between women and men" who do the same jobs at Gap -- both globally and by region.

The analysis is pretty surprising, considering the persistence of the gender pay gap. A 2013 survey by Pew Research found that women's hourly wages in the U.S. were only 84 percent as high as men's. U.S. Census data from 2012 showed that annual income for full-time working women was only around 77 percent of what males raked in.

Dan Henkle, senior vice president of human resources at Gap, told The Huffington Post in an interview that the company didn't achieve gender parity by accident. He said an unwavering devotion to looking at performance above all else helped Gap provide equal pay for equal work.

"Women were put in key leadership roles right from the beginning," said Henkle. "Their legacy in setting up the company is that they really focused people on what their contributions and performance are, and what are the relevant things you should be recognizing and rewarding."

At Gap, 73 percent of employees are women, including 69 percent of store managers. Gap also has an unusually high number of women in top management positions, according to a McKinsey & Company study of 60 major companies across industries. Nearly half of Gap's staff at the executive vice president level and above are female, compared with 30 percent at the companies McKinsey surveyed. 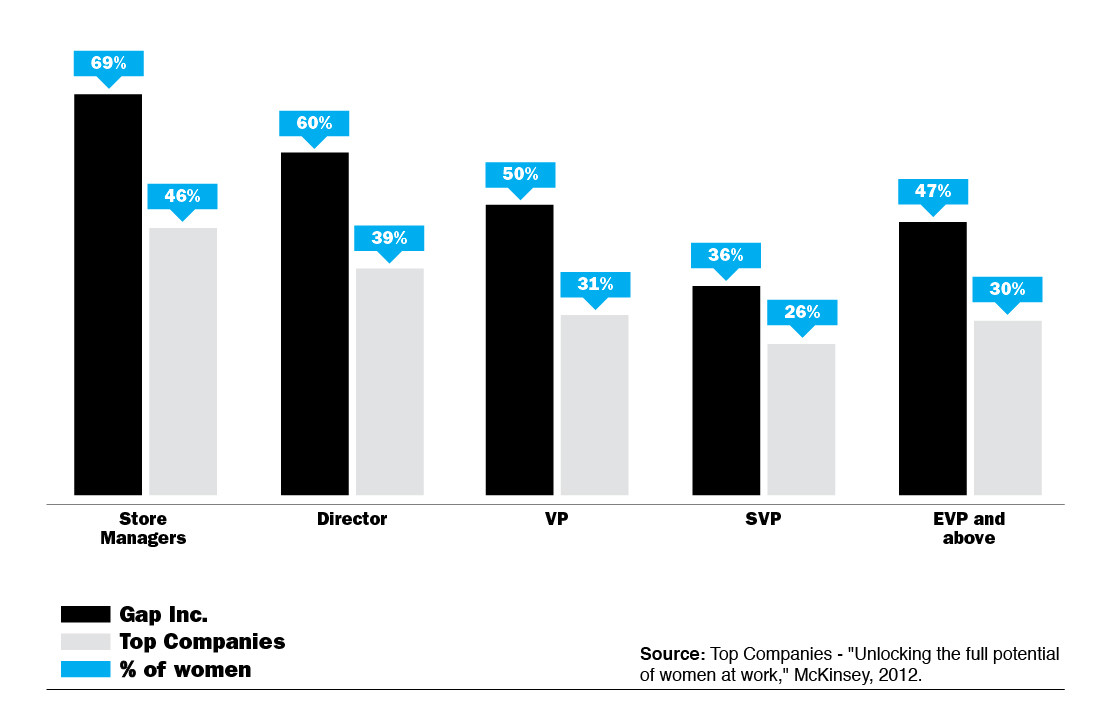 One of Gap's two founders, Doris Fisher, is a woman. She and her husband Donald contributed an equal amount of money when they started the company in 1969.

Given all these facts, "we kind of assumed our data would be pretty good," said Henkle.

Henkle, who has worked in Gap's human resources department for 22 years, says the company began making more of an effort to codify its diversity policies in the early 1990s. "That probably helped as well, just getting people talking about various issues," he said. All of Gap's brands have been led by women at some point, including Old Navy, Banana Republic, Piperlime, Athleta and Intermix.

It's rare for companies to share information about the gender in the workplace. But lately, there's been a push to lift the veil. President Barack Obama has loudly trumpeted a push for equal pay throughout his presidency, and recently signed an executive order to prevent workplace discrimination. Google, Facebook and Twitter, meanwhile, have each released data detailing the gender disparity in their workforces. But they haven't opened up about pay, and most companies aren't eager to disclose that sort of information.

"Maybe there are companies that are actually performing the same analysis internally and they just haven't shared it yet," Henkle mused. "That's very possible."

In an internal company-wide email sent in August and obtained by The Huffington Post, Gap CEO Glenn Murphy addressed the equal pay issue and questioned the lack of action from other big companies.

"In countries around the world, there is a sizable gap between what women and men are paid for the same work," he wrote. "In this day and age, you’d assume global CEOs would build cultures where there is no gender bias in pay."

Now that Gap has confirmation that it's paying its employees fairly, it intends to use data analysis to ensure that the gender pay gap never significantly widens.

"This will be a very simple thing to build into our annual compensation review process," said Henkle. He says Gap will be able to identify any outliers, determine the cause of discrepancies and make the necessary adjustments. The company keeps money on standby to reward good performance. If Gap needs to make salary adjustments, it can tap into this so-called "pool of merit."

While the women in Gap's corporate office and retail stores may reap the benefits of the company's initiatives to treat women equally, there's no data on the women working in the many factories that make Gap's clothes. Gap uses many local, third-party factories in Bangladesh, where about 80 percent of the garment industry's workers are women. They're some of the poorest laborers in the world.

According to a 2013 report from the Institute for Global Labour and Human Rights, a nonprofit that investigates labor rights violations, many women have been abused in Bangladesh factories that make Gap clothing. One 20-year-old woman had a miscarriage when she was seven months pregnant after being forced to work more than 100 hours a week, the report alleged.