From Sept. 25 to Oct. 3, Hindus across the world will be celebrating Navratri. The holiday honors nine different forms of the mother goddess and is marked by special rituals, ceremonies, and fasts.

Then, there’s the dancing.

Imagine hundreds of brightly-dressed dancers swirling in unison around the colorful statue of a beautiful Indian goddess, as a drummer quickens the pace on his dhol.

This is Garba and Raas, traditional dances that are performed to honor the warrior goddess Durga during the holiday. Chances are, there’s a dance taking place near you.

Here’s why you should go.

1. The Guest Of Honor Is Seriously Badass. 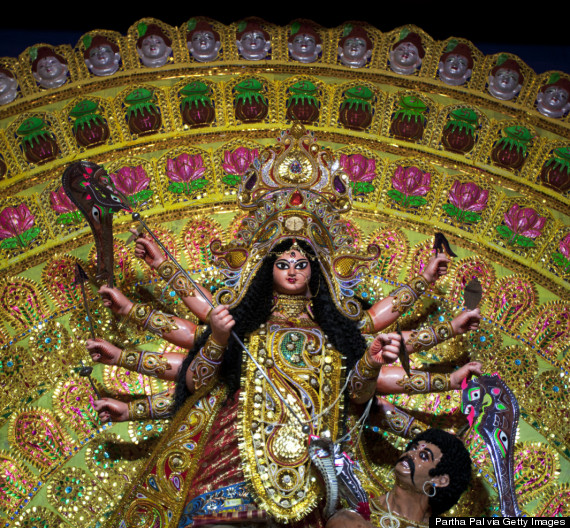 Durga encapsulates all of the universe’s material energy, i.e., she’s the kind of lady you wouldn’t want to mess with.

Stories of her escapades as a fierce warrior fill the pages of the sacred Devi Mahatmya text, according to Hindu priest and writer, Krishna Dharma. Durga rides into battle on the back of a lion and has eight to 10 arms, each carrying a special weapon. She was the only one powerful enough to (literally) squash the nearly invincible demon Mahisha.

She’s also known to be beautiful, but she uses her looks to attract demons to her side, and then annihilate them.

Durga is worshipped all over India, but people from the state of Gujurat have for years used Garba as a special way of honoring the goddess.

An earthen lamp or a statue of Durga is usually placed at the center of a large hall. Celebrants muster all the energy they have to dance vigorously in concentric circles around Durga.

In Raas, another dance associated with Navratri, participants strike sticks together to tap out a rhythm.

The Garba and Raas dances are actually dramatizations of the final battle between Durga and Mahisha, according to ZeeNews, marking the moment when good triumphed over evil. 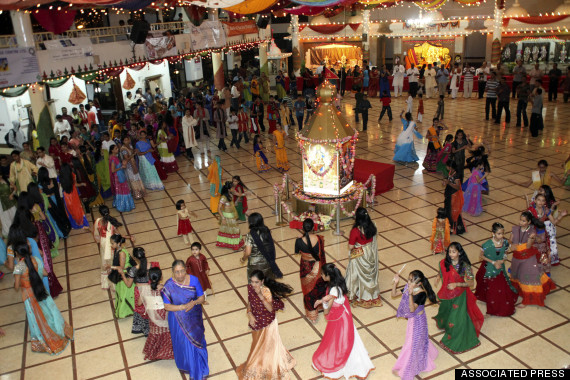 Modern-day Garba Raas dances are a fascinating mix of religious and cultural traditions. Many Hindu student clubs at American universities host Garba nights during Navratri that are open to the entire campus.

While some people who attend these events are doing it as a form of religious worship, Garbas are largely open to anyone who enjoys dancing, according to Sneha and Vikram Chandrasekaran, the organizers of New York’s Garba In The City.

The Chandrasekarans were both part of South Asian dance teams in college and see Garba as a festive way of sharing and passing on their culture.

“It serves to perpetuate Indian traditions,” the pair told Huffington Post in an email. 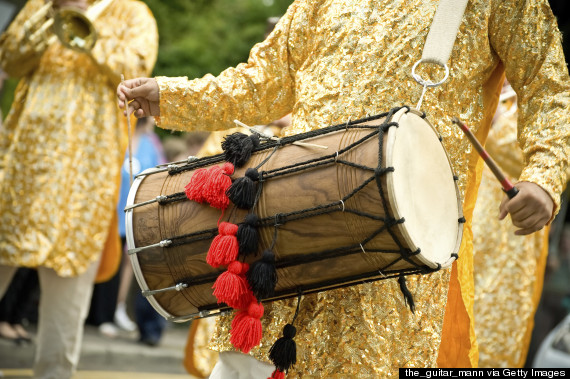 Traditionally, Garba Raas dances feature a live band of Indian musicians and singers. The person to look out for is the dhol player, the standing musician who hammers out a beat on a two-sided classical Indian drum. The songs start out slowly, the Chandrasekarans said, and then the musicians push the dancers faster and faster.

There are old favorites, like “Dholida Doli Re Vagad”, and “Sabse Bada Tera Naam” from the 1979 Bollywood film Suhag.

4. The Steps Repeat, So You’ll Get The Hang Of It. We Promise.
The moves on the Garba dance floor may look complicated, but they are repetitions of the same basic steps.

“The key is that the steps are rhythmic and repetitive, so once you watch and follow a combination of footwork and hand movements, you can join in the main circle,” the Chandrasekarans said.

The traditional Garba is a series of steps that include spinning, some hand-clapping and sweeping of the arms.

After that, dancers will grab colorful dandiya sticks to perform the Raas dance. The participants form two circles or two lines and will strike the dandiya of the person standing in front of them. One circle goes clockwise and another goes counter-clockwise.

5. Let's Be Real. Who Doesn’t Want To Dance Like A Bollywood Star?
Because of its color and beauty, Navratri celebrations have often made appearances in Bollywood movie. Many major stars--from Amitabh Bachchan to Deepika Padukone have performed Garba on film.

The important thing to remember is to manage your expectations. Honestly, the chances that you’ll end up looking like this are close to nil:

But if you’re lucky and brave, you may eventually reach the ultimate goal: blending in seamlessly.