The month of May has been designated Garden for Wildlife Month by the National Wildlife Federation. This weekend you can participate and do something good for the critters that share your neighborhood.

Full disclosure: I work for National Wildlife Federation. But I believe so strongly in the idea that our gardens can fit seamlessly into the local ecosystem and invite back the wildlife that has been forced into ever-shrinking wild areas that I'm not ashamed to be making a "shameless" plug for Garden for Wildlife Month.

National Wildlife Federation has been teaching people how to create wildlife-friendly gardens for almost forty years through our Certified Wildlife Habitat program. It's called that because once you provide the four elements of habitat -- food, water, cover and places to raise young -- we'll certify your garden as a wildlife habitat.

Our goal is to create a movement of natural gardeners who use native plants that are adapted to local conditions and with which native wildlife species co-evolved; that limit the use of chemicals and rely primarily on organic gardening principles; that don't automatically try to squish, zap or otherwise kill animals that show up in their yard; and who would ultimately rather enjoy a beautiful garden filled with birdsong, brightly-colored butterflies and the buzz of teaming life than spending their weekend pushing a loud, polluting mower and spraying toxic chemicals.

SLIDESHOW: Enjoy these photos of just a few of the wildlife that could call your garden home. 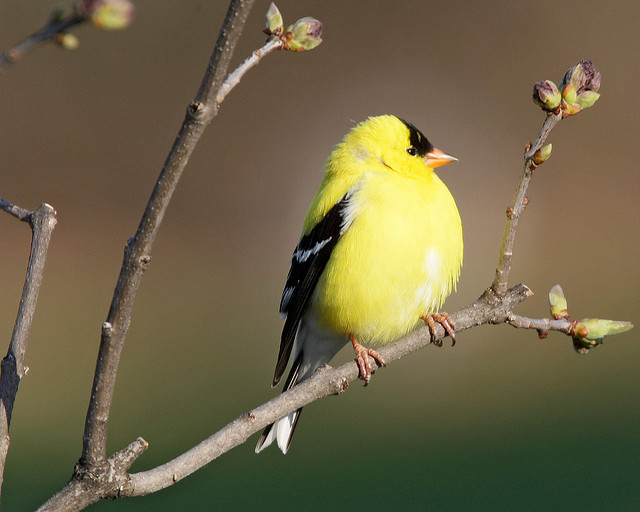 Goldfinch - Male goldfinches sport brilliant yellow plumage during the spring and summer breeding season. They are easy to attract by planting native wildflowers and grasses that provide the seeds these cheerful-looking birds relish. 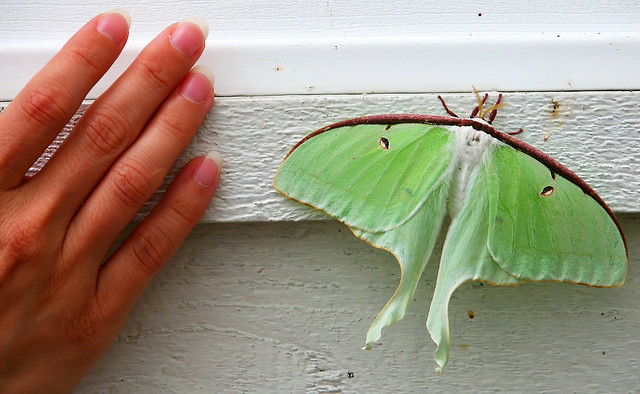 Luna Moth - These gorgeous insects won't be attracted to nectar-producing flowers like other moths and butterflies. That's because the winged adult moths don't feed at all; their sole purpose is mating and in the case of the females, laying eggs. The best way to attract them is to plant their caterpillar host plants which include birch, sweetgum, alder, sumac, hickory and walnut. Adult females seek out these plants to lay their eggs and the males follow. 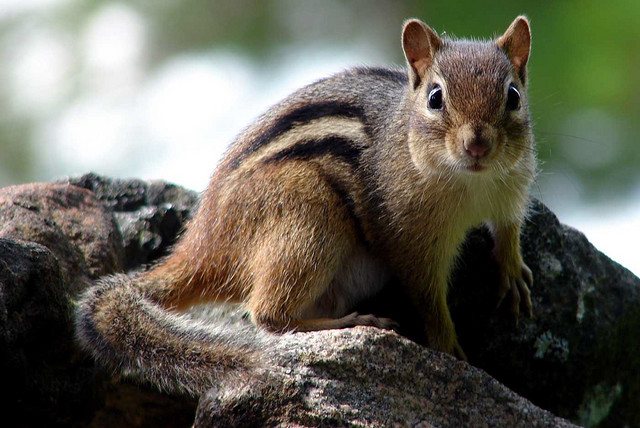 Chipmunk - These small, striped squirrels are common backyard residents that feed on a variety of plant and animal materials, from fruits and nuts to insects and salamanders. Their high pitched alarm calls are often mistaken for birdsong, but if you pay close attention you'll notice a flash of brown, black and white dashing for a burrow after each sharp chirp. 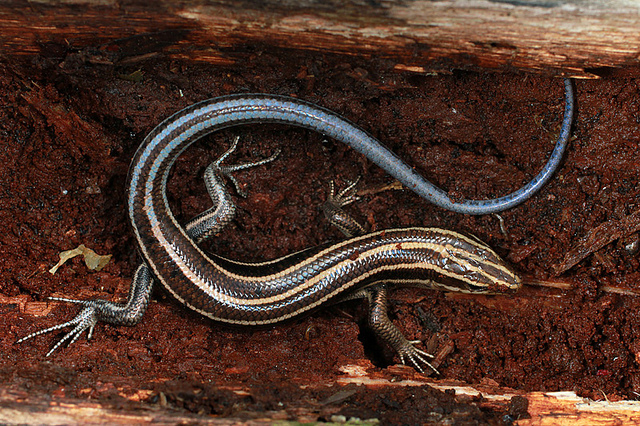 Skink - Lizards are extremely beneficial predators of insect pests in the garden. This juvenile skink sports a brilliant blue tail that will break off if the lizard is attacked by a predator. The wriggling tail is left behind to distract the predator and the lizard lives to grow a new one. Attract lizards by planting thick shrubs or building a rock or brush pile where they'll hide and hunt. 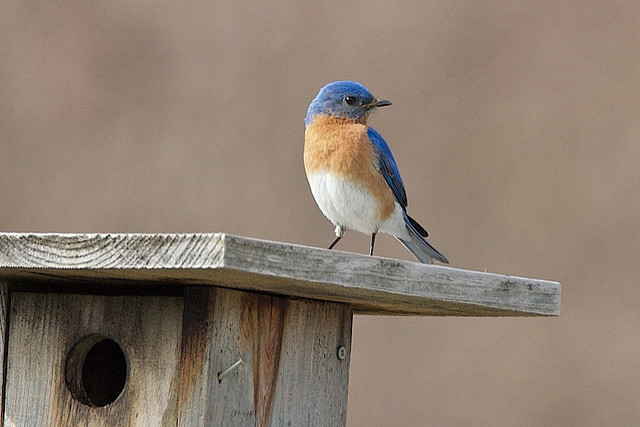 Eastern Bluebird - There are three species of bluebird in the United States: the eastern, the western and the mountain bluebird. All three are fruit and insect eaters and won't be attracted to typical bird feeders filled with seed. Attract them by planting native berrying shrubs and trees, abandoning pesticides and installing special bluebird nesting boxes. 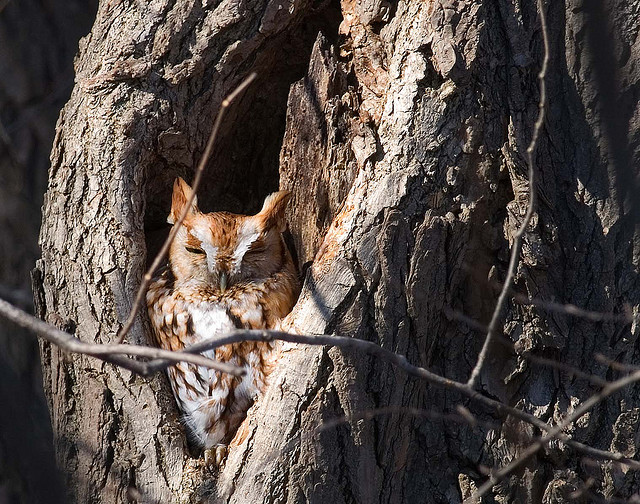 Screech Owl - Not all birds that will move into your wildlife garden are songbirds. Screech owls are common across the country in areas with mature trees. You can even install screech owl nesting boxes and if you're lucky, these nocturnal predators will raise their family right outside your window. 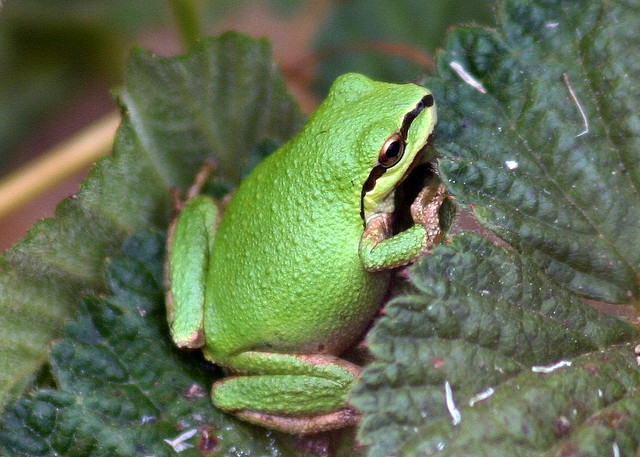 Pacific Treefrog - Amphibians are declining around the globe, so anything you can do to help this fascinating group of animals in your garden is a good thing. Amphibians are voracious insect predators and require clean bodies of water in which to lay their eggs. They'll happily use your backyard pond as a home for their next generation. 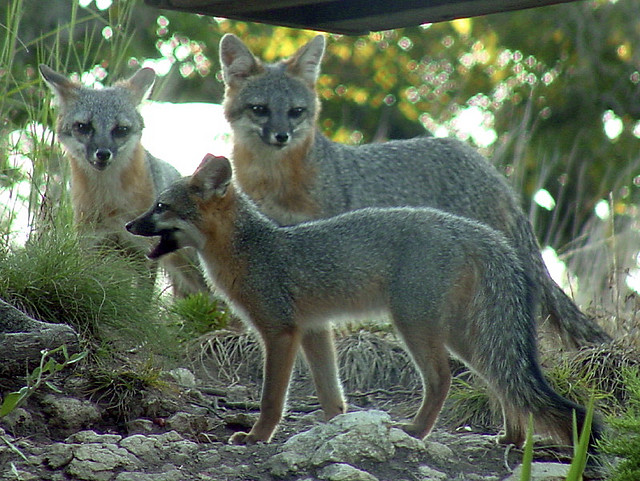 Gray Fox - This diminutive member of the wild dog family is common over much of the country but elusive and rarely seen. They're happy to move into a backyard with lots of shelter in the form of dense vegetation and brush piles to hunt rodents, birds and even insects. They are the only wild dog that regularly climbs trees so when you're scanning the landscape for backyard wildlife, be sure to look up! 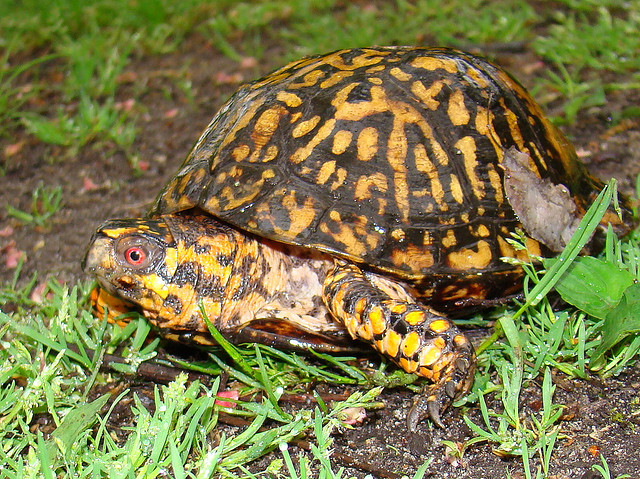 Box Turtle - Once very common throughout suburbia, decades of continued development and collection for pets by neighborhood kids have led to population declines of these friendly reptiles. Backyard wildlife is still wildlife and should never be approached, touched or brought into captivity. Box turtles are attracted to plants with red fruit such as strawberries, raspberries and jack-in-the-pulpit plants. They also relish mushrooms, so leave a few dead logs for fungus to grow on and the turtles won't be far behind. Box turtles love to snack on slugs too. 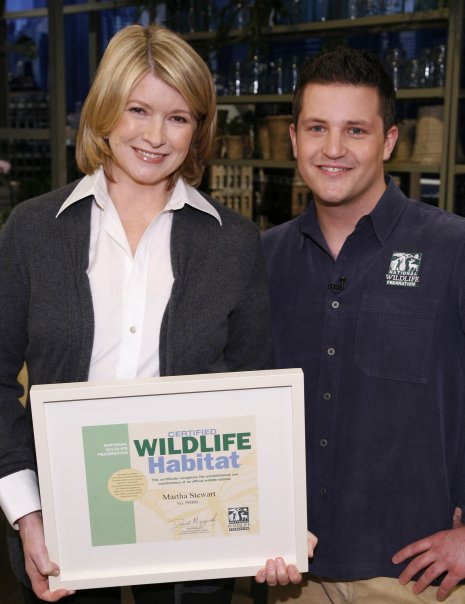 I certified Martha Stewart's yard as a National Wildlife Federation "Certified Wildlife Habitat." If Martha did it, you know it's a "good thing."

And the good news is that it's a lot easier than you might think. Chances are, you probably already have some of the four elements of habitat already in place in your yard. You don't have to have a lot space either. You can create a wildlife garden in containers or on many acres. You can create wildlife gardens at your home, your child's school, at your place of work or worship and literally anywhere a garden can be planted.

You don't have to have the perfect habitat to qualify for certification, either. In fact, we encourage people to start small and focus on the basics. You'll learn as you go and even the basics count towards certification. By certifying your garden you join the growing natural gardening movement.

And if you certify this weekend before the month of May ends, National Wildlife Federation will plant a tree in your name, further extending the benefit to wildlife.

So what are you waiting for? It's time to head outside into the fresh air and see how you can make your garden better for wildlife.