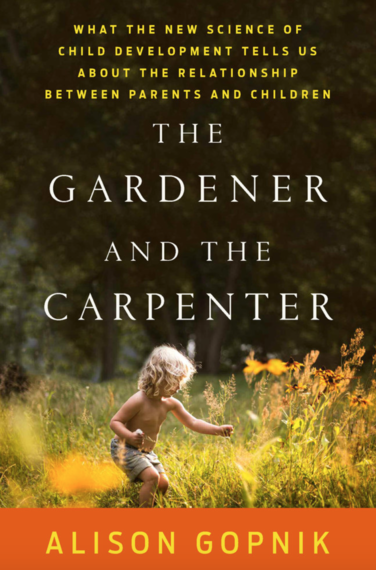 In one of Louis C.K.'s routines on the absurdities of rearing children, the comedian recounts his delight in watching his young daughter's tap dance recital. She's a miracle up there in her noisy little shoes, and he couldn't be prouder. What bothers him is all the other kids hogging the stage. He has to sit through all their dances too, for these kids that nobody cares about?

University of California, Berkeley professor Alison Gopnik, who just published a book on parent-child relationships, helps us make sense of the peculiar feelings and experiences we have while rearing our children. In The Gardener and the Carpenter: What the New Science of Child Development Tells Us About the Relationship Between Parents and Children, we learn, for example, that not especially caring about other people's kids is one of the costs of our devotion to our own, particular child: "The flip side of my commitment to those I love is the lack of a similar commitment to those I don't," Gopnik writes. Louis C.K. is going to have to sit through these interminable performances because other parents feel the same way about their darlings as he does about his own.

At the heart of Gopnik's book is a distaste for modern child-rearing methods, captured in the ungainly and ubiquitous term "parenting." As she asserts in one of many spot-on takedowns of "parenting," with all the prodding, controlling, and shaping of offspring the term implies, we don't "wife" our husbands or "friend" our companions, nor do we evaluate our "success" as friends or spouses by the latter's achievements. The value of these relationships comes from the depth of our connection and the quality of our love. The same should hold true for mothers and fathers with their children: our role is not to turn them into something--a perfectly accomplished violinist, say, or Ivy League coed--but to nurture them in a way that allows them to thrive.

Her work echoes that of other notable thinkers who have tackled the foibles and missteps of modern middle class parents, all examining the ugly consequences from their own professional perspective: Child psychologist Madeline Levine has explored how competitive parenting damages children's mental health; former Stanford dean Julie Lythcott-Haims has detailed the corrosive impact of well-intended but obsessive parents on children's sense of agency and self-worth; former professor William Deresiewicz has argued that our cultural fixation on elite universities, which drives much of the "parenting" excess, stunts genuine learning.

Gopnik brings to bear her own academic and personal experiences to the problem. A professor of psychology and affiliate professor of philosophy, a scientist with her own lab to study children, and a grandmother, she comes off as graceful and humane, if occasionally frustrated with the excellent sheep in her Berkeley classes, some of them products of the parenting she deplores. That she's also a regular contributor to the Wall St. Journal makes some of her political observations all the more... interesting.

"Parenting" is a by-product of widespread economic changes that compelled families to scatter and head for the cities, without other members of the clan to help raise the kids. Absent the accumulated wisdom of grandparents and aunts, harried mothers and fathers have turned to "experts" who can answer new parents' anxious questions. Modern, middle-class parents also borrow from their experiences as students and employees, applying lessons from these goal-oriented pursuits to family life.

This is wrong-headed in many ways. Or, as Gopnik puts it, "Parenting is a terrible invention." Young children grow best in a loving and stable home, where they have abundant opportunities for social learning. Children figure out how to behave by watching and listening to the caregivers around them; this non-conscious learning dwarfs anything that is taught to them directly, and is the main means through which children absorb their culture. Apart from reading to children, one of few successful approaches caregivers can deliberately adopt to teach kids, parents would serve their kids best by engaging in plentiful conversations, exposing them to multiple ways of doing things, and inviting them to play. "Being a caregiver who is a stable and reliable resource for learning is more valuable than being a caregiver who explicitly teaches," Gopnik writes. "Fundamental relationships of trust are more important than teaching strategies."

Once children hit school age, they are expected to conform to a system that pays no heed to the evolutionary tendency toward human variability. Humans evolved because survival required diverse ways of thinking and attending to events around them; to avoid attack, primitive societies needed hunters who could scope the plains quickly and spot a predator, as well as those who could bore down on a single one. But conventional schools, themselves a fairly modern invention, generally reward only those who can sit still and focus--useful, to be sure, but not the only effective way of thinking or handling problems. The eruption of attention deficit diagnoses in young children speaks not to the failure of children to focus, but rather to a mismatch between what schools demand and the way many children simply are.

As you would expect, Gopnik slams the relentless standardized testing that children endure, often aided and abetted by parents. "A standardized test score is the apotheosis of the goal-directed, child-shaping, carpentry picture of schooling--the idea that schools should be designed to turn all children into creatures with particular characteristics," Gopnik writes. Just as children do best in secure homes where they are encouraged to explore and indulge their diverse interests, so too do they flourish in learning environments that celebrate variability and discovery.

The Gardener and the Carpenter brims with original insights and observations, some of which Gopnik seems to throw in as asides to her major points. She devotes a chapter to technology, that wellspring of anxiety and handwringing for us slow-twitch grown-ups. Her message here: relax. Every generation absorbs and transforms the lessons from the previous one, altering the environment and the culture along the way. With one sentence, she demolishes the rationale for fussing over tiny "parenting" decisions: "It's very difficult to find any reliable, empirical relation between the small variations in what parents do--the variations that are the focus of parenting--and the resulting adult traits of their children." And as to the tiresome navel-gazing over finding the ideal "work-life balance," she offers just the right philosophical salve: "The answer is there is no answer...There is no decision that is best in some absolute way, and we need to accept both the guilt and the regret, and the consolations, that follow from this." Finally, who knew that killer whales are the only other mammal besides humans to go through menopause?

One of the strongest chapters is the closing one, called, tantalizingly, "The Value of Children," and in it she decries our national failure to care for those children who have neither gardeners nor carpenters to guide them. We feign concern for all children, while politely overlooking the one-fifth of American kids who grow up in poverty. We pay child care workers piddling wages--a reflection of our general contempt for caregiving of all kinds--and fail to provide prenatal care, universal preschool, and other critical services that would actually improve children's lives. America's treatment of its most vulnerable population, she concludes, "is a scandalous slow-motion disaster that we have come simply to take for granted." Children have no particular political value, and so their interests are routinely ignored.

My own children are out of the nest, and reading this today makes me wish I'd trusted my instincts about their scheduling and activities even more than I did. The pressure to "parent" is so insidious and ingrained in many American homes that it feels like apostasy, or even negligence, to allow children to goof off for an afternoon. When I recall the missed family gatherings, the splintered weekends--you take him to lacrosse, and I'll run over to soccer--the countless times my husband and I divided and conquered, as we put it, to ensure the "best" for our kids--I wish I'd had the fortitude to say to hell with all that. New mothers and fathers: skip the T-ball practice and Kumon class. Instead, head over to the park with a Frisbee and a couple of cheese sandwiches, and spend the last days of summer with your kids, together.