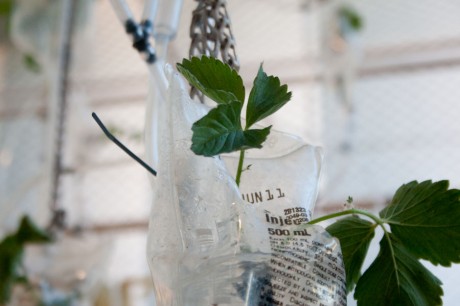 At around 4:00 PM on Sunday, June 27th, Guy Hatzvi of Farmlab, in association with Metabolic Studio, was rushing down to Marina Del Rey to find a replacement pump for the installation project entitled "Building 209: VA WLA: Indexical Strawberry Flag" that was to officially open to the public at the LACMA Campus in the next hour. Fortunately, he knew exactly what he was looking for: it's a type of aeroponic pump that allows for a nutrient-rich water solution to be drip-fed through a series of I.V. tubes connecting a system of sick strawberry plants. The project was conceived by Lauren Bon, the founder of both Farmlab and Metabolic Studio, and her team of dedicated employees had been setting up the installation all week. But at the last minute, of course, the original generator broke down, and it was up to Guy to get a new one up and running by 5:00 PM.

This one task -- obviously essential to the success of Bon's operation on its opening night -- was actually just a small tributary within the vastly ambitious constellation of works now going on at LACMA under the title of EATLACMA. In a sentence, this one-year-long, multi-faceted commitment from the Museum sets out to delve into the social, artistic, cultural, environmental, and humanitarian meanings behind natural food growth. In fact, this undertaking is so large, it's hard to do it justice in a simple blog post, so I'll just focus on the garden installations for now.

Along with "Building 209" -- which itself is indexical of a much larger work entitled "Strawberry Flag," located three miles west of LACMA at the Veterans Administration of West Los Angeles (a bus will soon be available to take visitors in between the two sites) -- there are also five other installation gardens on or around the LACMA campus.

One is called "Promiscuous Production: Breeding is Bittersweet" by the National Bitter Melon Council (yes, it exists). This tunnel-shaped, bamboo structure doubles as an experimental breeding ground for the hybrid, never-before-seen, BitterSweet melon. Through the age-old process of cross-pollination, visiting participants can actually partake in the experiment themselves by attending a series of day-long events intended to promote community, generate discussion, and -- don't forget -- make melons. 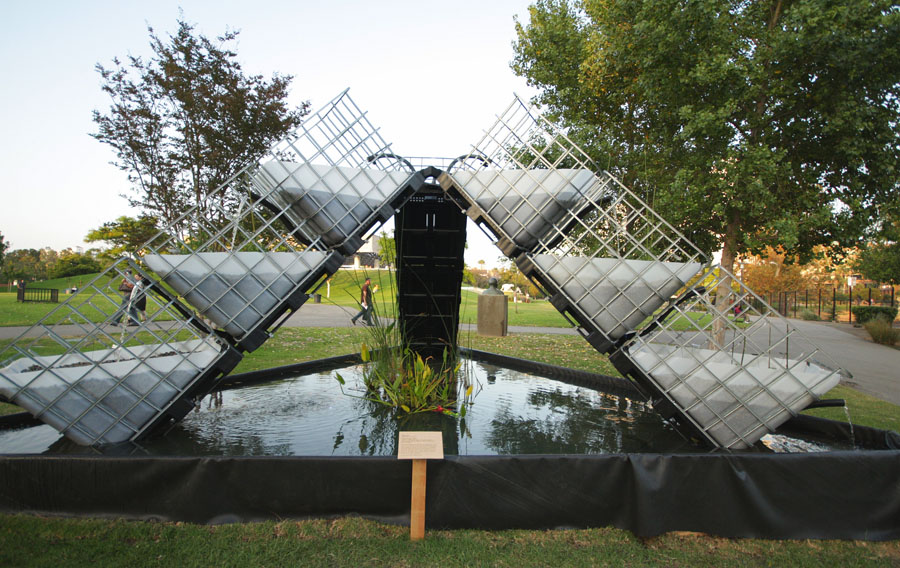 A little bit further east is "Food Pyramid" -- conceived by Didier Hess -- which is a solar-powered, aquaponic garden that simultaneously questions the traditional food pyramid most Americans grew up on; presents an eco-friendly, soil-free alternative to gardening; and cultivates all the necessary ingredients for a delicious fish taco--including the Tilapia.

Just off the southeast border of the LACMA complex, on the corner of Wilshire and Curson, sits your typical traffic circle, the median point between pedestrian walk signs, the border between east-bound and west-bound traffic. But now there is also a garden of radishes, as planned and planted by Islands of LA in a project they call "The Roots of Compromise." The traffic island itself is controlled by a variety of bureaucracies, and together, they agreed upon the root vegetable of the radish as the appropriate plant for their shared circle of land. The resulting food is representative of this small, but successful compromise.

Way over on the west end of LACMA, a crooked, polygonal potato garden lays flat and almost unnoticeable between the Ahmanson and the Art of the Americas buildings. But, according to the little placard placed in the soil, amidst at least 12 types of potato plants, "The varieties [of potato] exist as a result of coincidences, accidents, planning, violence, and careful custody over thousands of years. Through tracing their different backgrounds, a history of human desire appears." The placard also directs viewers to a website, allowing them to cellularly interact with the incredible stories behind each strain of potato. The website is www.potatoperspective.org, the project is titled "The Way Potatoes Go 8000-BCE-Present: A Potato Perspective on an American Matter," and was developed by sa Sonjasdotter in collaboration with the communities of the Potato Park (yes, it too exists). 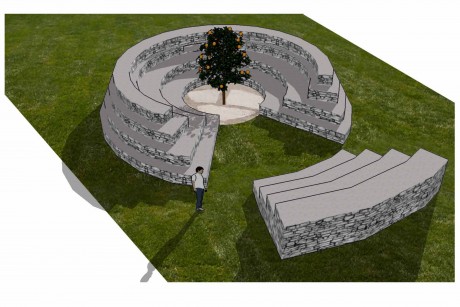 Finally, on the north end of the LACMA campus, just below 6th street, there stands a small, Roman theater of sorts, not unlike a miniature version of the restored Theater of Caesaria. Beginning November 7th, this is the site of what shall be known as the "Public Fruit Theater," a magical little installation concocted by the people of Fallen Fruit. In this theater, there will be only one performer (depending on how you look at it, that is), and that performer is a tree. Visitors are invited to come watch the growth process of this concrete-locked tree as if they were witnessing the slow arc of a character's development on stage. In this way, the episodic relationship between the tree, the viewer, and also the other audience members creates a story, much like the ones we look for in theatre.

But back to Guy, and his aeroponic pump. Come 4:30 PM, he's able to make it back to LACMA, and set up the device just in time for the first waves of curious onlookers. I observe the fragile configuration of hanging strawberry plants he helped set up, each interconnected by small life-lines of dripping nutrients, each literally holding on by a thread of survival, completely dependent upon one generator. I know it's supposed to be representative of the plight of the Veterans in Los Angeles, but it's also symbolic of the six gardens themselves, and beyond that, EATLACMA as a whole, and beyond that, the city of Los Angeles. I could go on and on, but you should probably just visit for yourself, and that way, become part of the garden.

All photographs are courtesy of LACMA and Fallen Fruit, and can be found at http://eatlacma.org/gardens/.