After the Washington state government proposed in a special legislative session to cut education funding as a way to close a $2 billion budget gap, hundreds of students from Garfield High School walked out of class in protest, the Seattle Post Intelligencer reports.

"For too long, this state's budget has been balanced on the backs of its students," protest organizer Mathis Watson said in a statement to The Seattle Times. "We are the people who have been affected most by these cuts, and we are showing that we care."

According to the report, students left their classes at 12:30 p.m. to begin their walk to City Hall, where they met with students from West Seattle and Nathan Hale high schools.

There, Seattle Mayor Mike McGinn spoke and shook hands with the students, as they chanted "no more cuts" in unison, according to The Seattle Times.

On its website, Garfield High School addresses the possible punishments for students who left class to protest:

"GARFIELD PARENTS/GUARDIANS-Announcement for 11/30: Any Garfield student who is considering being part of a student planned 'walk out' will not have their absence(s) excused UNLESS they have a note written from parent/guardian."

"I'm outraged that our state doesn't fund education," he told the station. "...That pushes teachers to have to take these kinds of actions... to get attention to our schools and school funding."

Check out photos from the protest below: 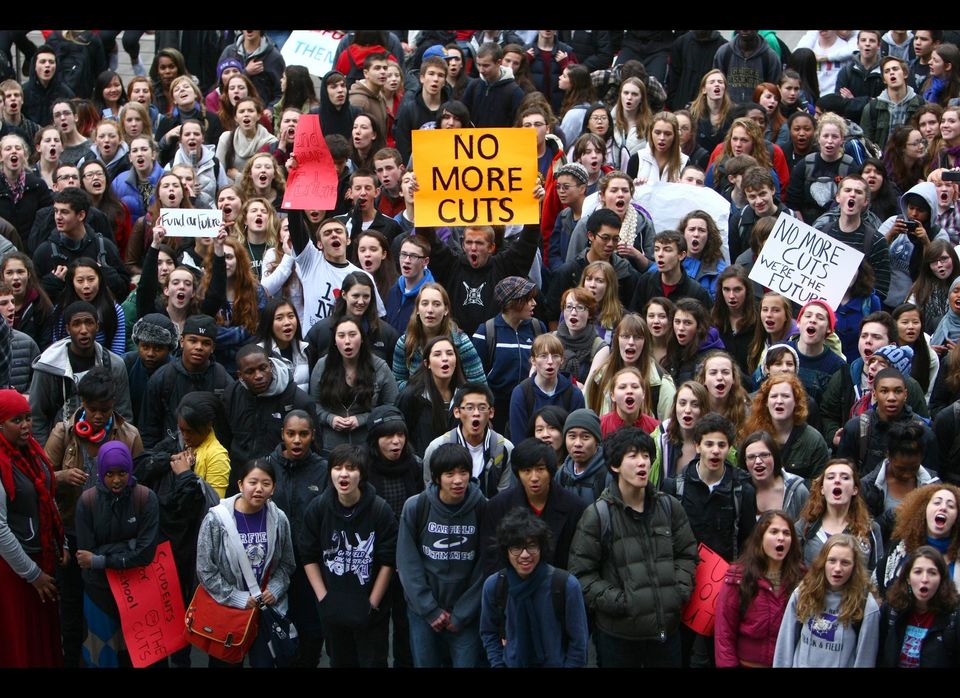 1 / 13
Garfield High School Walkout
Students chant in front of City Hall during a walkout by hundreds of Garfield High School students on Wednesday, November 30, 2011. People at the rally said about one third of the student body walked out to protest proposed education cuts now being considered during a special legislative session in Olympia. (<a href="http://blog.seattlepi.com/thebigblog/2011/11/30/photos-garfield-high-school-students-walk-out-protest-education-cuts/" target="_hplink">Joshua Trujillo, Seattlepi.com</a>)
Joshua Trujillo, Seattlepi.com