Two men were shot dead after opening fire outside an exhibit of caricatures of the Prophet Mohammad in Garland, Texas on Sunday.

The two men fired towards the Curtis Culwell Center and hit security guard Bruce Joiner, who was shot in the lower leg and suffered non-life threatening injuries, according to WFAA. NBC 5 in Dallas-Fort Worth reports that Joiner has already been released after being taken to a local hospital.

One of the deceased shooters was identified by CNN and ABC as Elton Simpson. According to court records reviewed by CNN, Simpson was convicted in 2011 of making a false statement involving international and domestic terrorism and sentenced to three years of probation.

Texas authorities declined to name either suspect in a press conference Monday morning.

The Muhammad Art Exhibit & Contest was organized by Pamela Geller, president of the American Freedom Defense Initiative, an anti-Islamic organization that is listed as a hate group by the Southern Poverty Law Center.

Jobin Panicker, a reporter with WFAA, tweeted details about the incident:

#BREAKING SWAT tells me two men have been shot. Possibly with explosives on them. @wfaachannel8

#BREAKING Hearing also that an officer was shot. Waiting for confirm. @wfaachannel8 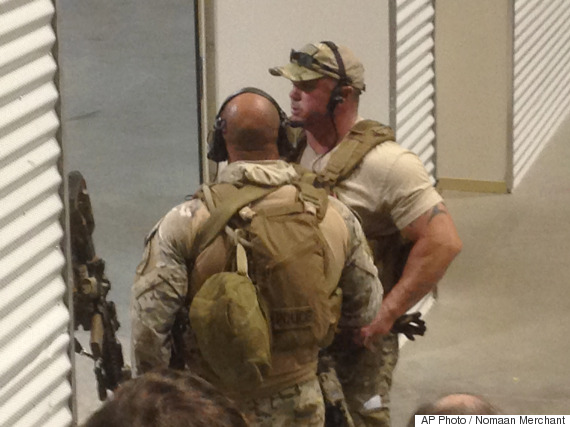 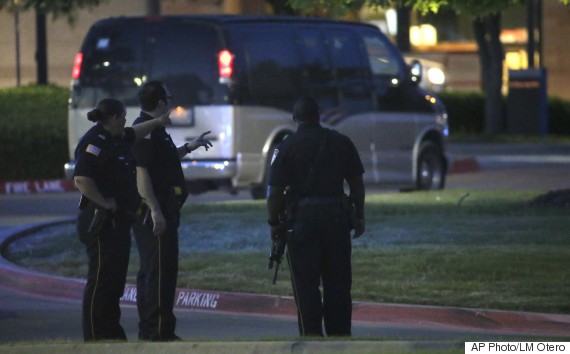 The exhibit, according to CBS DFW, was organized by Geller in response to a Muslim event held earlier this year at the same venue which was meant to combat Islamophobia. A representative of the local Council of American Islamic Relations chapter spoke to the CBS affiliate in February about Geller's event:

Alia Salem of the DFW Chapter of the Council of American Islamic Relations says supports free speech. “We should have free speech, and nobody’s stopping her from doing this, go ahead, maybe there’ll be some Muslims entering this, who knows.”

"Texas officials are actively investigating to determine the cause and scope of the senseless attack in Garland, Texas," Abbott stated. "This is a crime that was quickly ended thanks to the swift action by Garland law enforcement. Our thoughts and prayers remain with all those affected tonight."