WASHINGTON -- The Potomac River has shaped history. It's also an awfully nice place to go for a hike. Both these aspects of the river are explored in a new book.

Cocktail aficionado Garrett Peck -- author of " Prohibition in Washington, DC: How Dry We Weren’t" and leader of D.C.'s "Temperance Tour" -- has turned his attentions to the Potomac in his new book, "The Potomac River: A History and Guide."

The Huffington Post caught up with Peck to find out his favorite under-discovered spots on the river, how much of the Potomac's development was dependent on slavery and lots more.

Garrett Peck: Thanks much! I'd have to say my favorite activity is simply walking or hiking. It's something that anyone can do, and you don't need special equipment beyond a good pair of shoes. I packed a great number of hikes into the book in my attempt to get readers out and exploring the Potomac River.

Favorite personality? I'd say that George Washington looms larger over the Potomac than any single person -- he lived along the river (Mount Vernon, perhaps the most recognizable building on the Potomac), saw the potential to develop commerce along the river, surveyed Alexandria as a teenager, and picked the site of the nation's capital that bears his name.

Another personality that I'm really intrigued by is John Brown. He's been called the father of American terrorism. His failed attempt to incite a slave rebellion at Harpers Ferry in October 1859 proved to be one of the decisive actions that split the South from the Union and led to the Civil War. Following Brown's footsteps makes Harpers Ferry an especially valuable place to visit. And I find it fascinating that just three years later the Battle of Antietam was fought so close by - the battle that led to the Emancipation Proclamation. This corner of America is profoundly filled with history that changed the course of our nation.

GP: Much of the lower Potomac's economy (the Tidewater and Piedmont) was dependent on slave labor from the colonial era until the end of the Civil War. The big reason for this was the tobacco farms, which used slash-and-burn growing techniques that were environmentally devastating, depleted the soil and sent a tremendous amount of silt into the river.

George Washington also had a significant impact on the economic development of the river. He brought Maryland and Virginia together to sign the Mount Vernon Compact in 1785, where the states agreed to share the river for economic development and navigation (even though the river entirely belongs to Maryland). The compact is still considered law.

HuffPost: What are some of the great under-explored areas along the Potomac?

GP: I hit hundreds of sites along the river. The major places deserved and got their own chapters: places like Antietam, Harpers Ferry, Great Falls, the D.C. Potomac shoreline and Mason Neck. But there are so many obscure places that you've probably never heard of and that are totally worth visiting. Places like the Accokeek Creek Site in Piscataway Park, where the Piscataway Indians used to bury their dead, the Seneca quarry, the Exorcist stairs in Georgetown, and the Mallows Bay Ship Graveyard.

HuffPost: You seem really fond of Glen Echo Park. What makes it so interesting to you?

GP: Glen Echo is really a cool place. The only amusement park in the national park system and wonderfully restored to its 1940s Art Deco prime. I guess I love the place so much because it is so fun the photograph. The quirky angles, the colorful buildings, the amazing Dentzel carousel. The Civil Rights Movement sit-in at the carousel makes the park especially poignant, and I'm glad that it has been preserved. It's a neat arts center now - they park offers art classes, dance competitions, birthday parties, and even hosts weddings - gay and straight.

HuffPost: How would the National Mall have been different if Pierre L'Enfant's plan for it had been enacted? Was L'Enfant involved with other parts of the Potomac's development?

GP: Pierre L'Enfant envisioned a National Mall that was a lot smaller than today's Mall -- and one that had a much different Washington Monument at its core, but the fact that we even have a Mall is entirely because of L'Enfant. He was only on the job for one year, but his vision had a lasting impact.

L'Enfant wasn't involved in other parts of Potomac River development, other than to acquire the Public Quarry on Government Island near Aquia. This provided the sandstone for many of the capital's public buildings.

HuffPost: You write about the Potomac's important place in the D.C. area's economic history. Is the river still important?

GP: The Potomac was once a major shipping route, but it is a shallow river. As the river silted up, large ships could no longer come up the river. Georgetown and Alexandria declined as ports. Baltimore had a major advantage in that the B&O Railroad terminated there -- and it had a deepwater harbor. Today there isn't much shipping on the Potomac. The biggest contributor to our local economy is that the river provides 90 percent of the drinking water for the five million people of the Washington, D.C. metropolitan area. This is surface water -- not ground water from wells.

HuffPost: You write in your book that "there is still hope" for the Anacostia River. What does that mean? Hope for what?

GP: The hope is that the health of the Anacostia River will improve. It is currently inundated by suburban runoff and combined sewer overflows (CSOs) that release sewage into the river after thunderstorms. D.C. Water is making a major investment to improve the infrastructure that will largely eliminate CSOs.

HuffPost: Do you have a favorite place along the Potomac?

GP: I covered hundreds of historic sites in the book, but the one that takes the prize for most historic and has the most spectacular scenery is Harpers Ferry. I love that place. And nearby is my favorite town along the Potomac, Shepherdstown, which has a nice mix of historic old town and a thriving restaurant scene -- all in a town of 1,500 people. As for places that are close to Washington, I'd pick Great Falls - I often go there to hike, and it's a favorite spot to take visitors to D.C. People are always amazed that we have this huge natural waterfall just twenty or so minutes from downtown.

HuffPost: Why is there only one ferry that still crosses the Potomac?

GP: There were once hundreds of ferries operating on the Potomac. They fell out of favor as they were replaced by bridges where there was enough river traffic. White's Ferry is the last operating ferry on the Potomac. It links two areas that are still largely rural: Loudoun County, Virginia, and Poolesville, Maryland -- deep in Montgomery County's Agricultural Reserve.

Let's hope that this area remains rural. For this reason, we cannot allow another Potomac River crossing to be developed in this area. It will put enormous development pressure on an area that has been designated as rural. You build a road, a highway or a bridge, and surely development will follow.

HuffPost: Did you learn anything surprising while researching this book?

GP: My biggest surprise was learning about the Seneca quarry. It is in essence a "lost" site. It's there, but you have no idea that it exists -- there are no signs or anything to indicate that the quarry that provided the bright red sandstone for the Smithsonian Castle is right along the Potomac and C&O Canal.

It is 22 miles upriver from Washington, just a couple hundred feet west of the Seneca Aqueduct (also built with Seneca redstone) and immediately north of the C&O Canal turning basin. This is historically a significant quarry for the Washington-area: a great number of buildings were constructed with Seneca red sandstone in the decades after the Civil War, especially around Dupont Circle.

Today the site is covered with sycamore trees, wild roses and poison ivy. The site is so fascinating to me that my next book is a history of the Seneca quarry. 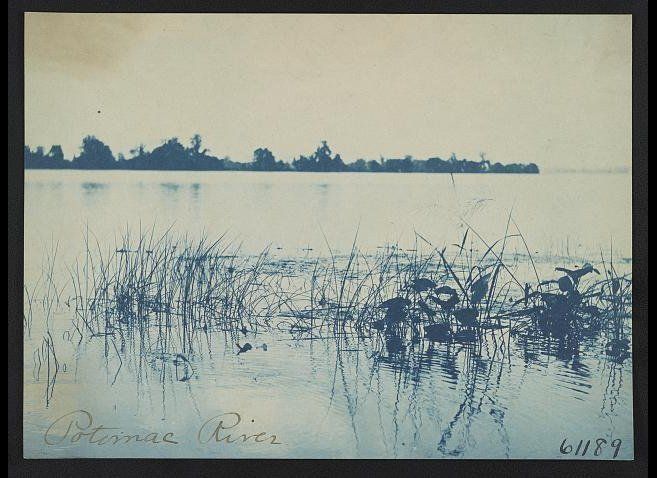