Garth Brooks may have been standing on stage in Yankee Stadium before tens of thousands of fans, but his words had such an intimacy about them. It was as if he was leaning in for a one-on-one chat. "When I come to New York I never feel secure enough that I can be myself," he told the wildly adoring crowd. "But it turns out that's exactly what you want me to be. And I realize, you love me just as I am!"

As his "People Loving People," song goes, there was a lot of love for Brooks who rousingly performed that song and other favorites like "Two Pina Coladas," "The River," "Papa Loved Mama," "Friends In Low Places," "The Dance" and more. He also sang "In Another's Eyes" with Trisha Yearwood. And she passionately belted her classics including "How Do I Live" and "She's in Love With the Boy."

Brooks' recent Yankee Stadium concerts marked the first time the country superstar has performed in New York since 1997 when he played to nearly a million people in Central Park. He and Yearwood are also the first country artists to have a concert at that legendary stadium. Just hours before taking the stage, Brooks and Yearwood talked to Parade. "The people out there have always taken care of me so I'll go out there, have fun and trust," said Brooks. "It's kind of like closing your eyes, falling backward and trusting they're going to catch you."

Brooks and Yearwood shared more with Parade and other reporters. Read the full story at Parade.com. 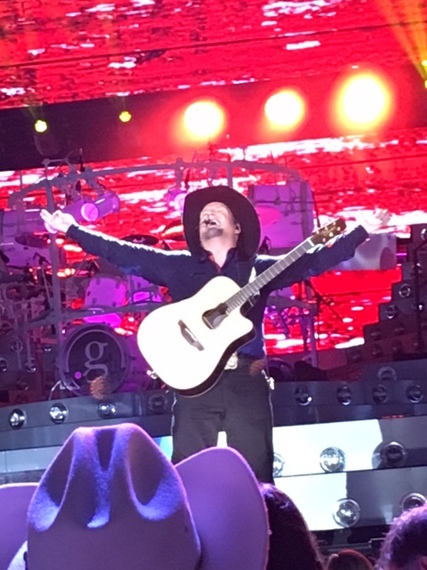