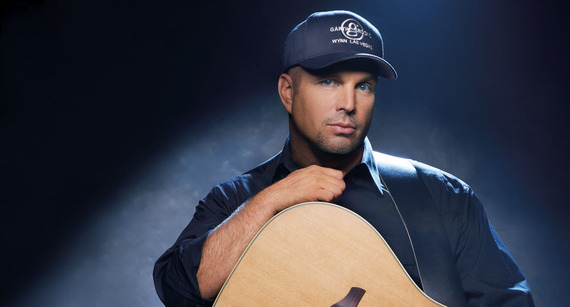 Last week, Taylor Swift got a lot of attention for an op-ed in The Wall Street Journal about her predictions for the future of the music industry. She remarked (and sales data support) that people are buying fewer and fewer albums--presumably, the albums of artists with whom they feel a connection on the deepest level. "Some artists will be like finding 'the one,'" Swift wrote. "We will cherish every album they put out until they retire and we will play their music for our children and grandchildren."

For me, that artist--"the one," if you will--is Garth Brooks. I am, by all accounts, a Garth Brooks superfan. Growing up in rural Oklahoma, I always felt that if a man hailing from a town just a few miles from where I was born could become a beloved, industry-changing international superstar, then it wasn't too far-fetched that I, too, could make my living in the entertainment industry.

When Garth announced his "retirement" from music in November 2000, I felt confused and slightly betrayed. His songs had provided the soundtrack for my youth, and I couldn't imagine (at 16) why anyone would want to retreat from the spotlight. In 2001, the year Garth's last studio album, Scarecrow, was released, I got my first job at a radio station. It seemed like a natural stepping stone for a high-school student hoping to break into the business side of music.

By the time Garth made his first big break from retirement (to open a new arena in Kansas City, Missouri, in 2007), I was working at a record company in New York. I immediately booked a flight to the Show-Me State so I could be in the audience for the first gig at the Sprint Center. I'll never forget that night. Garth did encore after encore, pouring his heart into his songs and the songs of his heroes for more than three hours. It was a magical show and the first time I'd seen my own hero perform live.

When Garth announced his next break from retirement, a Las Vegas residency at Steve Wynn's Encore Casino, I was no less excited. I streamed the press conference live from my desk and told my husband we had to be in Vegas for opening night. Luckily, he was happy to indulge my obsession, and we made the trek to Sin City. We saw two shows that weekend, and returned to Vegas a few more times in the years that followed to see the show again.

The Vegas show was very different than the electric, high-energy shows that made Garth famous. As the world saw during the televised special over Thanksgiving weekend 2013, the Las Vegas residency was an unplugged, one-man-and-his-guitar intimate performance that was captured for 2013's boxed set release, Blame It All On My Roots. In other words, it was a show custom-made for superfans.

In 2011, inspired in great part by my passion for Garth Brooks, I launched an entertainment company, ZinePak. Our mission is to help artists create engaging products for their superfans. In the last three years, I've worked with dozens of entertainers, ranging from KISS to Katy Perry to George Strait, to put together packages for their superfans. Many of the artists I've worked with (including Miranda Lambert, Taylor Swift, and Rascal Flatts, to name just a few) have cited Garth as their biggest musical inspiration. On a personal level, it's very rewarding as an entrepreneur to collaborate with stars who share my love and regard for Garth. It's also a validation of my childhood dream, which Garth was indirectly responsible for fueling.

I partnered with Walmart to launch ZinePak because--you guessed it--Garth chose the retail giant for his exclusive box set releases in 2005 and 2007. Those box sets, which comprised only a handful of new tracks between them, were the only products from Garth between 2001 and 2013. By way of comparison, in that same timeframe there were four new studio albums from Tupac Shakur, who died in 1996, and literally dozens of new albums and reissues of works by Johnny Cash, who passed away in 2003. Alan Jackson released four new studio albums.

This void in the marketplace, plus the absence of a major record company pushing catalogue projects or songs (Garth owns all of his own master recordings), led to Garth being, at least in modern terms, somewhat cloaked in mystery for an entire generation of country music fans.

I became acutely aware of the "Great Garth Generational Divide" in April of this year, when I was preparing to go to a George Strait concert in Tulsa. Before the show, I reminded my brother, sister-in-law, and 11-year-old niece, Hailey, to be on the lookout for Garth. After all, we had great seats and the show was a mere 15 miles from Garth's home in Owasso. Seeing him in the crowd wasn't outside the realm of possibility.

After a few minutes of fiddling around with her iPod Touch, my niece said, "Garth isn't anywhere. He's not on Spotify or iTunes, doesn't have an Instagram, and GarthBrooks.com is just one page that doesn't do anything. How can HE be the biggest artist of all time?"

I understand my niece's befuddlement of not having instant access to your favorite artist. She's grown up in a world where she can instantly access music, videos, and social updates from any artist she chooses. She--and millions of other kids--will never know the feeling of listening to the radio just to hear your favorite song to come on. In fact, at that George Strait show, opening act Ronnie Dunn (Garth's contemporary and one-half of legendary duo Brooks & Dunn) was interacting with me on Twitter!

By stepping out of the spotlight for almost 15 years (and the most transformative years in the history of recorded music, at that), the best-selling artist of all time has created a huge void. This is part of Garth's allure, his mystique. As an artist who has already rewritten the rules of music and broken nearly every record in the book, Garth is facing a new challenge that no artist before him has: he is, in some regards, both a legend and a "new" artist simultaneously.

The "legend" part is obvious, with more albums sold in the modern era than any other artist in history. But, with zero social media presence, no website, and no digital music, he is essentially starting from scratch with fans under the age of 25, who will judge him not on his remarkable past, but on what unfolds in 2014 and beyond.

It will be interesting to see how Team Garth manages the transition to digital. With the countdown clock at GarthBrooks.com pointing toward a Tuesday release date, we won't have long to wait to see what happens. Garth's new music, which he proclaimed last week will not sound like today's "bro-country" or "hick hop," will follow soon after and will be judged by today's younger-than-ever country music consumers.

Garth's superfans from the '90s (like Andy from Atlanta, the fan to whom Garth will be exclusively announcing his upcoming tour plans) will never leave him. That's a given. He could sell out arenas and stadiums for the next 30 years just playing to that crowd. The interesting thing will be whether today's generation of country music fans embrace the man and his music the same way listeners fell in love with the Oklahoma cowboy two decades ago. As a man who thrives on new challenges and breaking records, this is surely an important metric to the artist.

Amid the saga of Garth's planned Ireland shows, which has captured headlines across the globe, one of the most intriguing reports was a remark Garth made in a press conference on Thursday: 75 percent of people who purchased tickets--roughly 300,000 of the total 400,000 fans--were under the age of 25. This would be a major contrast to Garth's Vegas residency and scattered one-off shows over the past several years. Whether Garth's tour kicks off in Ireland as planned or later this summer in some other city, it won't be long until the world gets a look at the NEW makeup of Garth Brooks Superfans.

Time will tell if Swift's predictions for the music industry will come true. Time will also tell if Garth Brooks will pull off the comeback-of-all-comebacks and endear himself and his music to a brand-new audience of millions. As a businesswoman, and a superfan, I'll betting that my fellow Okie will shatter expectations and find even more success in the second half of his career than in the first.