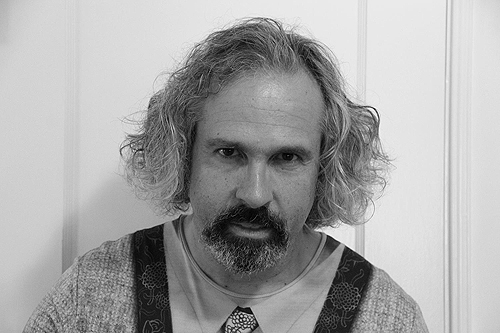 It was hot, it was grimy, it was sweaty and it was another day in the life with curator Kate Stern. We met artist Gary Baseman in his Los Angeles home and on that hot afternoon there was a flu running through the city, and I was feeling the heat. The stuff coming out of my mouth looked like something that could be easily oozed out of one of Baseman's creepy toy characters. My body heat index was as hot as the sweat rolling down Stern's carefully sculpted neck. I felt delirious and queasy. I was on Stern's time. She was in command and I was to muster courage and fight through whatever was ailing me. Now, of course, Stern would dispute this, but in my delirium this is how it felt. She also knows that I like to joke around and she lets me be myself.

It was May 9th at 9:24 p.m. when I was messaged by Stern. She said she loved the "Photos of artists and the art docs" that I was doing. She had seen them on Facebook, and apparently it was Peter Frank's post about me that Stern first saw, when she decided to contact me. "GO YOU!" she screamed in ALL CAPS that night. As weeks and months went by she 'hip-pocketed' me; a Hollywood industry term when someone you value is put in your back pocket till an opportunity of mutual interest presents itself. That "something" may have changed my life forever. 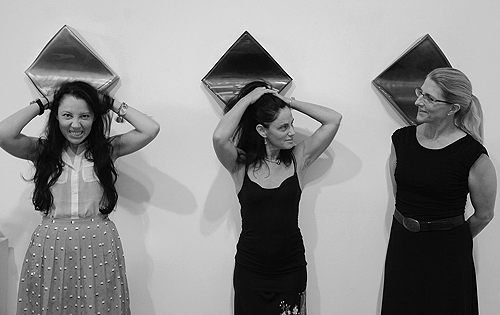 
Kate Stern is the curator of the Frostig Collection. The Collection, started by Celia and Chris Piazza, is "an on-going series of small sculptures, paintings and work on paper created by well-known artists to benefit children with learning disabilities, Asperger's, and high-functioning autism." Helping kids in need was a worthy project for me to take on, but furthermore, it was the roster of extraordinary, spirited, and kind-hearted artists that I got to meet that made the serious and reverent nature of the project more fun and exciting. I could easily heap kudos on all the artists in the collection I've met thus far, but it was Gary Baseman that inspired me on the spot, so I asked him if I could return a week later to film him. 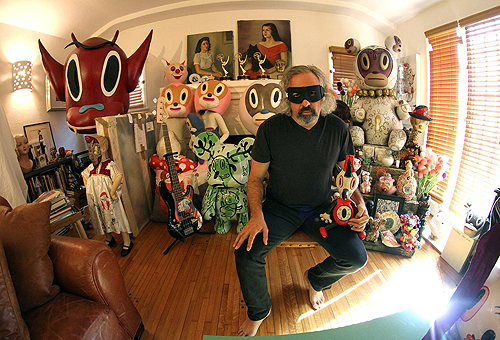 Gary Baseman in his Los Angeles studio (Photo by EMS)


What fascinated me about Baseman was that he was living among his art. His art work and toys were everywhere. Baseman also had those qualities that a documentary filmmaker loves. With Baseman all you had to do was point the camera at him and shoot. His persona has a range of mixed qualities that include a childlike dreamer, a curiously perverted teenager, and sage-like uncle. The sometimes avuncular and mischievous Baseman also likes to be in front of the camera; a result of his experience with performance art. He can be meek, compassionate, and confident all at once. In a single conversation, caught on film, Baseman discusses childlike fantasies that inspire his art and the Nazi death camps. Baseman has no qualms telling a stranger the dark history that preceded his past. It is through his art and upcoming projects that he is simultaneously working out his demons, his fears, his hopes, all while being enlightened by his discoveries and travels to places where horrible atrocities were levied on his relatives. When a man confronts these horrors, perhaps a value of one's own mortality and quality of life is seriously taken into account. Baseman has a true sense of what is truly good and what is truly evil.

Through Kate Stern I was able to meet a myriad of other artists, who are also living complex lives. Their art has also inspired me to revisit and document them. It is through Stern's strong connection with these renowned artists and the Frostig Collection itself that I have been given these opportunities to meet many fascinating, multi-faceted people.

See the film on Gary Baseman: