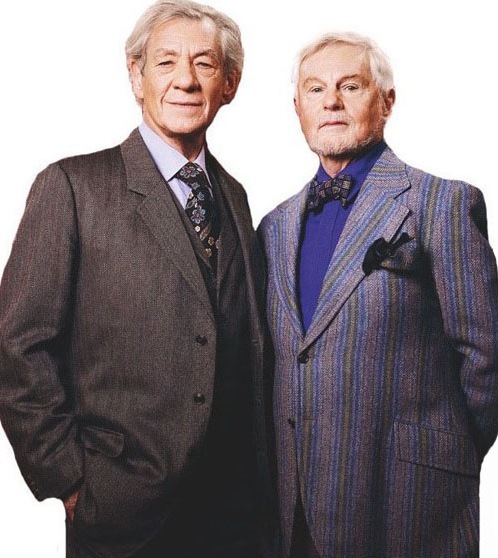 This week I talked with writer/producer Gary Janetti (Will & Grace, Family Guy) about his fabulous new PBS sitcom Vicious. Legendary openly gay actors Sir Derek Jacobi and Sir Ian McKellen play Stuart and Freddie, partners who have lived together in their central-London flat for nearly 50 years. Behind the façade of hilariously snide remarks regarding each other's age, appearance and flaws, a deep love for one another is revealed. This groundbreaking sitcom tells the story of an older gay couple and their longtime circle of friends as they struggle to maintain their visibility and significance in our youth-oriented world. The ensemble cast also includes their feisty best friend Violet, played by Frances de la Tour, and Ash, played by Iwan Rheon, their young, impressionable upstairs neighbor.

I talked with Janetti about taking on relevant aging issues in this comedic format, and about his spin on LGBT equality. When asked what he would like to accomplish with this show, he stated:

What I want to accomplish is not only that this is a gay couple -- the fact that they were gay was always besides the point -- it's also a couple of a certain age. We don't see couples in their 70s together not as an archon to the young couple on the show but as the main focus of the show. And their world is also populated by people around the same age as them, and they are the people we follow. We're inside their world, and it's unusual, and I don't think it should be unusual. There was something about that I felt really good about accomplishing. Also that they were a gay couple of a certain age and within the gay community. These are men in their 70s, and they have been clearly out, certainly to each other and their closest group of friends, for 50 years. What does that mean 50 years ago? How difficult was it to be out 50 years ago, to live with another man at that time, in the 1960s? And I think these people and those stories we don't often hear a lot of, they're heroic, to give center stage to a couple that might sometimes seem anonymous, these couples that you see at times on the subway, or walking down the street, or in a little restaurant, and you wonder what their life was like. This is an opportunity to kind of go inside, and for better or for worse, you see what this relationship is.

Gary Janetti co-created, wrote and executive produced Vicious for ITV. It was shot before a live audience in the UK and has already been renewed for a second season. Vicious can be seen on PBS Sundays at 10:30 p.m. Janetti and his partner, celebrity stylist Brad Goreski, have been together for 13 years.