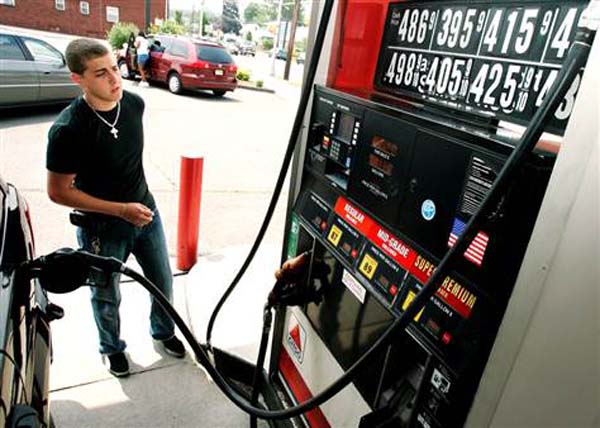 A recent front-page story in the Washington Post announced the results of a new Post-ABC News poll that found nearly two-thirds of Americans disapprove of the way President Obama is handling gasoline prices.

Too bad presidents have no control over them.

But that doesn't stop politicians -- or journalists, pundits and the general public, for that matter -- from calling out the president when it suits their agenda.

In 2006, for example, when gas prices doubled under President Bush, Rep. Nancy Pelosi slammed the "two oil men in the White House." "Today's record high gas prices," the California Democrat said, "are the price that the American people are paying for the Bush administration's failed energy policies." And that was when regular grade gasoline was averaging $2.91 a gallon. Two years later, it jumped to more than $4.

Now the tables have turned. A gallon of gas yesterday averaged $3.82, and Republican House Speaker John Boehner recently made the same baseless allegation. "The president's energy policies," he told Fox News' Greta Van Susteren on March 8, "have led to a more than doubling of gas prices over the three years of this presidency."

There are a number of reasons why gas prices are spiking -- turmoil in the Middle East and growing worldwide demand among them -- but there is no quick fix for presidents to lower them. That said, there are practical steps our political leaders can take to reduce the amount of oil we consume, which would save Americans billions of dollars for years to come.

Speaker Boehner's solution to drill, baby, drill is not on that list. He complained to Van Susteren that the Obama administration has "closed down most of the gulf" and "all the public lands in the inter-mountain West. And if we're going to bring gas prices down, we need to have all of the above."

In fact, the number of oil rigs in U.S. oilfields has quadrupled over the last three years, despite the temporary slowdown in the Gulf of Mexico after the BP oil disaster. And domestic crude oil production increased by nearly 17 percent between 2008 and 2011.

But even if we opened the entire country to rigs, the impact on gas prices would be inconsequential -- pennies at most, and not for decades. Americans consume more than 20 percent of the world's oil, but the United States holds only 2 percent of the world's proven reserves -- hardly enough to affect the price of a global commodity.

One need only cite the findings of the U.S. Energy Information Administration to prove the point. In 2007, the EIA analyzed the potential impact of increased offshore oil production. It concluded that "access to the Pacific, Atlantic, and eastern Gulf [moratorium] regions would not have a significant impact on domestic crude oil and natural gas production or prices before 2030. Leasing would begin no sooner than 2012, and production would not be expected to start before 2017." The effect on prices would be negligible: "Because oil prices are determined on the international market ... any impact on average wellhead prices is expected to be insignificant."

Conversely, if we boosted fuel efficiency, expanded our reliance on low-carbon fuels, and provided better transportation options, we would not only save Americans money at the pump, we would curb U.S. dependence on oil and combat climate change.

The Obama administration already has made significant strides in increasing fuel economy by establishing the first new standards in more than 30 years. In April 2010, it announced standards for new cars and light trucks that will increase average fuel economy to 34.1 miles per gallon by model year 2016 and cut new vehicle global warming pollution by about 25 percent compared with today's average. Then, in July 2011, the administration reached a second agreement with automakers that will nearly double the average fuel economy of new cars and light trucks by 2025.

The first round of the standards took effect this year, so new car buyers are already benefiting. Over time, the standards' benefits will grow dramatically, ultimately reducing U.S. oil consumption by as much as 3.5 million barrels a day -- more than 50 billion gallons of gas annually -- in 2030, according to the Union of Concerned Scientists (UCS). That's almost as much as the U.S. imports from Canada and Mexico combined, and it's more than we imported from the entire Middle East last year. Likewise, in 2030 the combined standards will cut some 640 million metric tons of global warming pollution -- the equivalent of shutting down nearly 140 average-size coal-fired power plants for a year -- and save Americans $150 billion after covering the cost of the fuel efficient technology.

And that's not all. Last August the administration finalized the first fuel efficiency and global warming pollution standards for new medium- and heavy-duty trucks. The standards--for trucks sold between 2014 and 2018--will reduce fuel consumption across a range of categories, from long-haul trailers to buses to cement mixers. They collectively represent only 4 percent of vehicles on our nation's roads but, according to UCS, account for 20 percent of U.S. fuel use.

These landmark fuel economy standards will go a long way to protect our pocketbooks, not to mention our health, our national security, and the future of the planet. But there is still much more to do to develop low-carbon fuels and electric vehicles, expand public transportation alternatives, and improve the energy efficiency of our planes, trains, ships, factories and homes. UCS has outlined a "National Oil Savings Plan" that would do just that, resulting in a 50 percent reduction in projected U.S. oil use over the next 20 years.

Instead of rehashing the same tired arguments every time gas prices jump, let's focus on real solutions to curb our oil addiction. Drilling more is definitely not one of them; cutting consumption in half is. So let's stop the blame game and get to work.