Bayan Zehlif is a 17-year-old student attending Los Osos High School in Rancho Cucamonga, California. She happens to be Muslim and happens to wear the hijab (head scarf). In the final days of her high school career, when she should be feeling bittersweet emotions that come with graduating and looking forward to college and adulthood, she is feeling hurt and fearful instead.

Her school published their 2016 yearbooks with islamophobic bullying in place of her actual name. 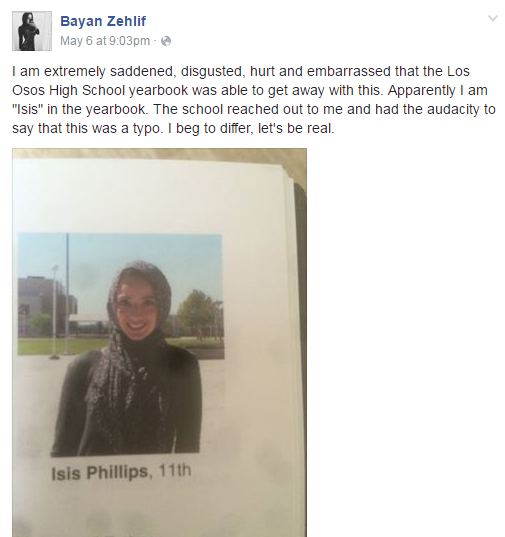 They published "Isis Phillips" instead of her name, Bayan Zehlif.

She did what any 17-year-old with any amount of self-respect would do. She spoke out about it.

What she received back was support from a lot of great people around the world and in her community.

She also received a ton of backlash from some kids at school and people online in the form of societal gaslighting.

That's right. Let's call a spade a spade. When Muslims call out bigotry unleashed on them, bigots don't like that. I guess us Muslims need to not only take in any bigotry you hurl at us, we must absorb it. And we need to shut up about it too. Because we are just insane to believe that it is actually happening. It's all in our heads!

What is gaslighting? It's a form of mental abuse. It's also a tactic used to try to make you question your own reality, sanity and sense of reason.

With an alarming number of narcissistic personalities dominating society these days from the dating world, the presidential election platform to Kanye -- you should have heard of this tactic by now because narcissists love to use it. If you haven't heard about it yet, here is a daily dose of learnings for you. Because if someone hasn't yet tried this on you in your lifetime, chances are someone might try it on you at some point in your life. And let me tell you, as a blogger whose main focus is islamophobia, I get gaslight attempts tweeted and messaged to me all the time.

From my google search:

Just googling the story brings about the headlines. The headlines themselves -- as a whole -- are a crock. Many are an attempt to minimize the reality of what actually happened. That a young woman was bullied and discriminated against -- and then gaslighted and further bullied for being bullied. That an entire religion of 1.6 billion followers is often broad brush-stroked as being "terrorists" or "ISIS." 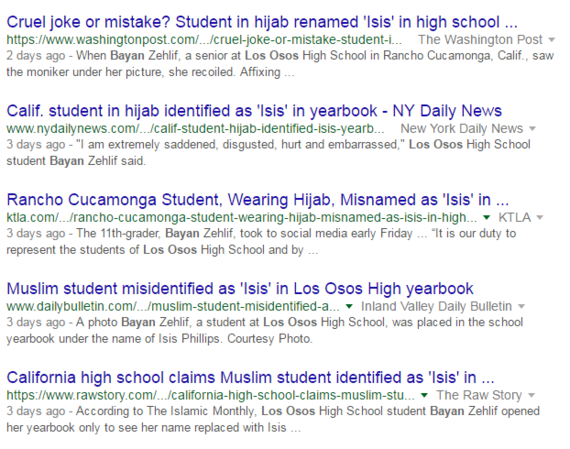 Headlines like "Cruel joke or mistake?" feed into the gaslighting affect. Like it's even a question the word ISIS can accidentally be placed beneath a Muslim girl's picture. A simple typo. Because when you type BAYAN, B-A-Y-A-N sometimes it accidentally displays as ISIS, I-S-I-S. Duh.

Like 'misnamed,' 'misidentified,' or 'renamed' in the headlines is any better. She was not misnamed, misidentified or renamed. She was bullied. She was attacked in a vicious manner -- with islamophobic hate speech beneath her photo in her senior yearbook.

I immediately tweeted about the incident when I heard about it with the #LosOsosHigh hashtag and received responses back that I needed to "chill" and that is was a "mistake." Those responses have since been deleted by the poster.

As a member of the Muslim American community, I am calling out the bullying and gaslighting that has taken place at Bayan's school, online and in headlines. I have defended CAIR continuously by islamophobes that spread lies and hate against America's only civil rights/legal organization that stands up for Muslim Americans who are discriminated against -- as if Muslims have no right to speak out when they are discriminated against. We must take the abuse -- and then NOT have any place (like CAIR) to turn to if the world was run by the gaslighters.

I'm proud of this young woman, Bayan Zehlif. I can't imagine myself at age 17 going through this and then having the guts to sit at a press conference and stand up for myself in front of the entire world. She even states that she didn't do it for herself, but people at large who get discriminated against. Bravo, sister!

Back at Los Osos High School, kids are bullying her for standing up for herself. One student was caught on video pulling down a sign of support for Bayan on their school campus.

Here you can see a student of @LosOsosHigh tearing down a poster in solidarity with the Muslim student, Bayan. pic.twitter.com/FhxezJphcd

Bayan did a great service to her school, community and the country at large when she stood up against the harassment. Islam teaches us to call out injustices -- even if it's against our own brothers. Don't sit and take abuse, bigotry and manipulation hurled your way. Recognize gaslighting and call it out for what it is. And Bayan sister, we are here with you every step of the way. All of us who are against bigotry against any group of Americans have your back. We're in this together.