It's not just your town: Gasoline is cheap pretty much all over the country.

The map below, from gas-price tracker GasBuddy.com, shows the average price per gallon of regular unleaded gasoline in each U.S. county. See that big sea of green in the middle of the country? That's where gas is about $2 or less. 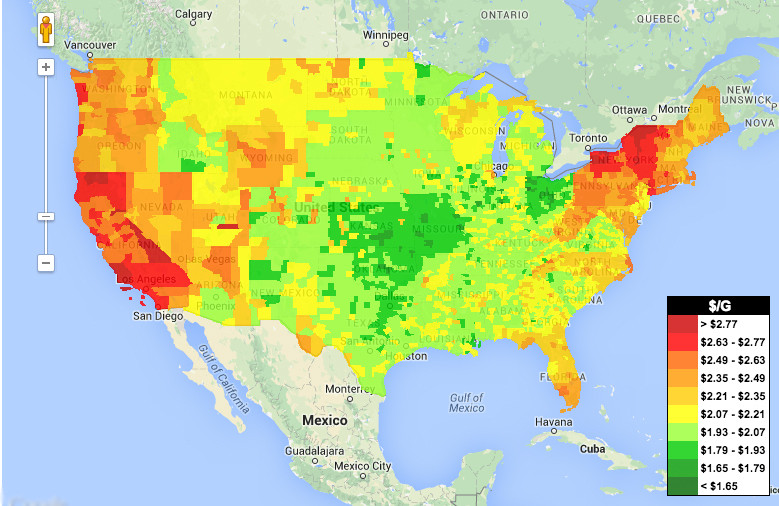 Even where the map is light-orange and yellow, gas is cheaper than $2.50 per gallon. Here's a link to the interactive version of GasBuddy's map, where you can search for prices by ZIP code, city or state.

The national average price of a gallon of gasoline was $2.18 as of Tuesday morning, according to GasBuddy. That's the lowest since 2009, when the economy was still climbing out of the hole of the financial crisis and Great Recession. The national average price is down from $3.32 a gallon a year ago -- one happy effect of the ongoing bloodbath in the market for crude oil, where prices have crashed from $100 to less than $50 per barrel in the past six months. Here's a chart of the accompanying collapse in gas prices, also courtesy of GasBuddy:

Cheaper gas is a boon to Americans who live from paycheck to paycheck (most Americans, in other words), particularly when those paychecks have been basically stagnant for the past several years. It's not necessarily great for the environment, as more-expensive gas tends to make people drive less often and buy more fuel-efficient cars. SUV sales have bounced back lately, possibly because of cheaper gas -- though SUVs have also gotten more fuel-efficient.

Aside from the recession, gas prices haven't been below $2 a gallon consistently in more than a decade. Now gas is less than $2 at 40 percent of U.S. stations, CNN/Money's Chris Isidore pointed out on Monday, with prices still falling. The national average would be cheaper if not for still relatively high prices in California and New York, where gas taxes are higher. Californians also use higher-quality gasoline to keep pollution under control.

As Isidore pointed out, gas may not get a whole lot cheaper from here. Crude-oil prices aren't expected to fall too much further, and prices tend to rise in the spring.