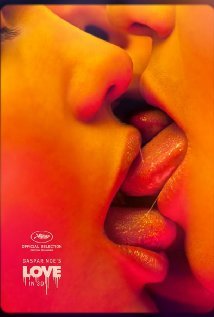 At one point in Gaspar Noe's Love, his male lead Murphy (Karl Glusman), a would be director studying filmmaking in Paris, announces,

"my biggest dream is to make a film that depicts sentimental sex."

Audiences who see Love may ask why it isn't simply called Sex, since the sex is graphic, and so ubiquitous that the brazenness becomes almost routine. During the Q &A the followed one of the opening night screenings of the film Noe remarked,

"I don't see why there aren't more genitals in movies. They're everywhere."

But make no mistake about it Love is not porn. Noe whose contribution to civilized society may lie in reintroducing the now almost extinct cosmetic notion of pubic hair into a world intent on Brazilian waxing, tips his hat to Courbet, particularly with respects to the painter's famed "The Origin of the World," whose wanton sexuality negotiates a fine line between beauty and provocation. From the first scene of mutual masturbation between Murphy and Electra (Aomi Muyock), the film uses sex to communicate states of emotion and being. A later threesome with a next door neighbor Omi (Klara Kristin) is a set piece. It's not the climax of a dramatic scene, it's the scene. As in Blue is the Warmest Color, the sex itself tells the story. It's the language of the film. The problem, in the case of Love, is that the result creates a kind of schizophrenia that was not apparent in its predecessor, which was a seamless melding of sex and talk. With Love, the sex is more intelligent than any of the words iterated by the characters. Here for instance are a few examples of Murphy's lines: "I'm just a loser, a dick and a dick has no brains," "living with a woman is like sleeping with the C.I.A.; nothing is secret," "I want to make movies that are blood, sperm and tears" "it's raining, it's cold and maybe we're not the great artists we once dreamt we were." None of this does justice to the complexities of the physicality the director portrays or from his singular view of sex a mixture of pain and babies. And the dialogue has caused some critics to ask how a film that's shot in 3-D could have such bi-dimensional characters (though commenting on Noe's use of erotic 3-D one audience member remarked that it was the first time she'd been cummed on by a movie). All this being said, it must be pointed out that Noe carries on the tradition of the European directors he obviously admires. Electra whose appearance recalls the vampish Jeanne (Maria Schneider) of Last Tango disappears much like Antonioni's Anna (Lea Massari) in L'avventura. His male lead wears a Fassbinder tee shirt and there's a Salo poster on the wall of his apartment. And the notion of the outlaw as artist or in this case the artist as outlaw recalls the world of Godard's Breathless. Noe, who made his reputation as the infant terrible of art house cinema with Irreversible and Enter the Void, has followed in the footsteps of giants while developing a cinematic vocabulary that's all his own. N.B: If words fail, why not just use movement? Remember The Joy of Sex? Why not produce a graphic dance piece called The Pain and Joy of Sex? Such a work would undoubtedly play to sell out crowds.