In America we celebrate many liberties, among them the freedom to publish. The logical consequence of the right to produce books is the freedom to read. Now, this may be a "chicken or egg" dilemma, but whichever way you look at it, one action should naturally follow the other. 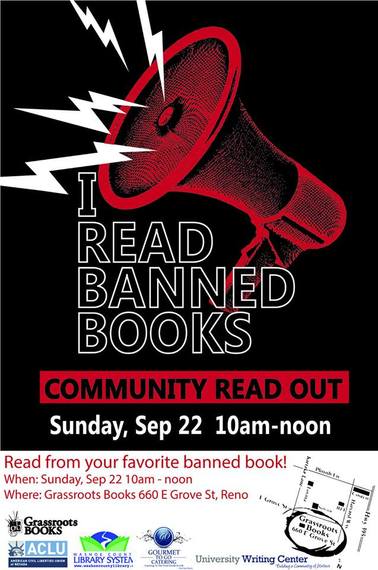 Banning books seems like an act for the days of the Spanish Inquisition or for a time when ecclesiastical censors were outlawing works of thinkers like Galielo and Copernicus. As hard as it might be to imagine, the right to read is still being put to the test -- and not so infrequently -- by those who seek to suppress words, thoughts and ideas that challenge their own. Sometimes censorship is validated by the prevailing political or moral culture, usually when there is great homogeneity within a community, where dissenting voices are not wont to be heard. Other times, a controlling body -- in some cases individuals -- try to impose conservative or outworn beliefs or ideas upon a greater, transforming population.

Within the last few years, popular books such as Harry Potter, Fifty Shades of Grey, And Tango Makes Three (a children's book based on the true story of two male penguins in New York's Central Park Zoo who are given an egg to raise), and classics like To Kill A Mockingbird and Catcher in the Rye have been successfully challenged in American communities.

According to the Banned Books Week web site (bannedbooksweek.org), which is maintained by the American Library Association (ALA), over 11,000 books have been challenged in the US since 1982, the year Banned Books Week was inaugurated. It is important to note that that number represents only the challenges that have been reported. The campaign was founded by activist Judith Krug in response to the sudden rise in challenges to books that year. It is now supported by the ALA as well as the American Booksellers Association, American Booksellers Foundation for Free Expression, American Society of Journalists and Authors, Association of American Publishers, and National Association of College Stores, and is endorsed by the Center for the Book in the Library of Congress.

We celebrated the 31st anniversary of Banned Books Week in Reno, Nevada, with the 4th Annual Northern Nevada Banned Books Week celebration, which was held on September 22 at the Grassroots Books store located at 660 E. Grove St. The event was sponsored by the American Civil Liberties Union of Nevada, Washoe County Library System, University of Nevada-Reno Writing Center; and Grassroots Books.

For the second year in a row I was honored to have been asked to participate in the event as an official community reader. Being an advocate of freedom of expression and the right to seek knowledge and information, I happily accepted. Each of the invited readers was asked to select one or more challenged books and then to pick passages for reading aloud to the community.

My selections focused on stories about homosexuality, particularly as they have been adapted to film. Needless to say, the subject has been the topic of much controversy over time as it has been written about in books and portrayed in cinema. Vito Russo's groundbreaking 1981 book, The Celluloid Closet, openly discussed, perhaps for the first time in a truly impacting way, the concerted effort in Hollywood to stave off the depiction of homosexuality and brought attention, as Russo put it, to the reality that as the matter became unavoidable to address, how such behavior was reflected mockingly, disdainfully and disrespectfully.

As a follow-up to my introduction by Russo, I elected to read from two works of fiction that addressed homosexual relationships, inspiring later cinematic interpretations. The first book, The Well of Loneliness, a novel written in 1928 by British author Radclyffe Hall, was not in fact adapted to film per se, but was the inspiration for movies that sought to benefit from its controversial subject matter of a lesbian relationship, compelling one journalist to write, "I would rather give a healthy boy or a healthy girl a phial of prussic acid than this novel."

It seemed fitting to conclude my presentation with excerpts from one of the most famous and arguably culture shifting films on the subject -- 2005's heart wrenching Brokeback Mountain, which was adapted to the screen from the 1997 short story of the same name by Annie Prouix. The powerful story, starring Jake Gyllenhaal and the late Heath Ledger onscreen, treats openly of the passionate and secret love affair between a rodeo cowboy and a Wyoming ranch hand. As an example of the backlash against the material, conservative radio personality Rush Limbaugh openly referred to the film as "Bareback Mountain" and "Humpback Mountain," and Don Imus labeled the film "Fudgepack Mountain."

My invitation letter from the organizers of the Northern Nevada Banned Books Week event stated: "It is an opportunity for the community to focus on the importance of free and open access to information while drawing attention to the harms that censorship through attempted banning of books can bring." I cannot think of a more powerful way to draw attention to the problem than to openly and vocally utter the words of those who have challenged, perhaps even unwittingly, the status quo for freedom's sake.

In trying to gain support for the Revolutionary War, Patrick Henry legendarily exclaimed: "Give me liberty or give me death!" In the case of Banned Books Week, the call may not be to arms but to awareness. It is by our liberty that we are free to read, so let us celebrate books in all their variety and, most of all, honor the history of our nation as a land of opportunity and free expression.

NOTE: This article originally appeared in the October 2013 issue of the LeRue Review.