Whoever decided we need to revisit O.J. Simpson's life and murder case with two multi-part television documentaries should now raise his or her hand and explain. 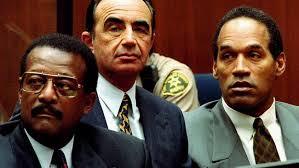 OJ: Made in America, a five-part miniseries in ESPN's first-rate 30 For 30 series, will debut Jan. 22 at the Sundance Film Festival before airing on ESPN in June.

You could say there's an anniversary somewhere in here, since October marked 20 years since O.J. was found not guilty in the brutal murder of his ex-wife Nicole.

Connor Schell, senior vice president of ESPN Films, also reminded TV writers in Pasadena Tuesday that to a whole younger generation, the O.J. story isn't a rerun. No matter how indelibly Americans from the 1990s remember the media tsunami that surrounded his arrest and trial, Schell correctly observed, "Most people under 30 don't."

Either way, both ESPN and FX clearly stepped back on this field mostly because they see a gripping story. If it doesn't rip us apart the way it did in 1994 and 1995, it still rubs raw nerves that only start with race.

The biggest challenge is giving the story a fresh coat of paint, which is where ESPN and FX go their separate ways.

FX is using the O.J. case to kick off what it projects as a multiyear series of American crime stories. The idea is to drill deep into a complicated case, examining exactly how the legal issues unfolded and how each of a thousand moving pieces ultimately came together to shape the outcome.

Since much of the country in 1995 assumed O.J. did it, there was a widespread perception the prosecution must have fumbled the ball. FX's The People Vs. O.J. Simpson follows the prosecution - and the defense - through each step, explaining why this was or wasn't done, why that was or wasn't possible. 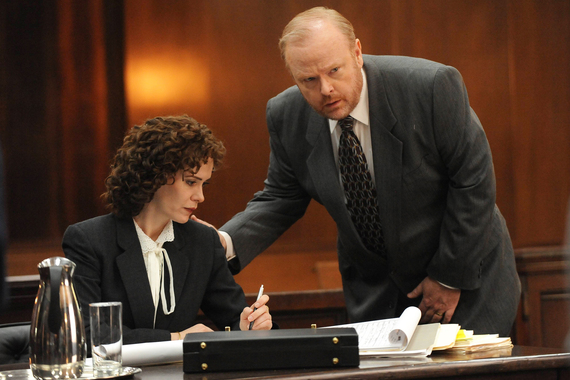 Much of the story focuses on prosecutor Marcia Clark, played by Sarah Paulsen (above). O.J.'s attorney Johnnie Cochran (Courtney B. Vance) is drawn as sharply as O.J. himself (Cuba Gooding Jr.).

But while FX has framed the series as an in-depth examination of issues both legal and moral, it does not ignore the fact the case also spilled over into popular culture.

We will remember that O.J.'s defense team prominently included his long-time friend Robert Kardashian (David Schwimmer). Robert's family, of course, has subsequently carved its own pop culture niche through the go-figure television and tabloid fame of his daughters, Khloe, Kourtney and Kim.

Their connection to the O.J. murder case was slightly below tangential. That doesn't stop the series from including a scene in which Robert Kardashian , trying to talk a distraught O.J. out of committing suicide, exclaims, "O.J., don't shoot yourself in Kimmy's room!"

The FX team will be talking with TV writers about the new show on Jan. 16. The ESPN team talked about theirs Tuesday, and director Ezra Edelman made it clear his game plan does not resemble FX's, which he said he hasn't seen and doesn't expect to see "for some time."

Edelman frames O.J.'s story "in a much larger context," weaving it into the growth of Los Angeles and the evolution of the city's race relations back to the 1950s.

From the Watts uprising of 1965 through the Rodney King beating in 1991, Edelman's show suggests, Los Angeles had struggled with mixed results to find racial harmony or even detente.

This so increased sympathy in the black community for black defendants, Edelman suggests, that purely from a practical defense standpoint, 1995 was "the best time for O.J. to be tried for murder."

Unlike the FX series, which focuses on the murders of Nicole Simpson and her friend Ronald Goldman, Edelman doesn't introduce O.J. as a man about to take a slow ride in a Bronco. He picks up O.J. decades earlier, as a poor kid who wants to become famous even more than he wants to become rich. 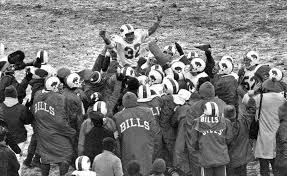 His dream worked out very well for a long time. O.J. built a brand as a great athlete who, like Tiger Woods years later, transcended race and became someone that everyone liked.

He not only ran footballs, he sold products. Directors cast him in movies. When you heard the letters "OJ," you thought of Orenthal James Simpson, not Tropicana. That's marketing Nirvana.

Of course, the size to which O.J. built himself geometrically increased the impact of his implosion.

Ready or not, the game is back on.