DANIA BEACH -- A giant 40-ton alligator head that turned many heads as it floated along the New River last year on its way to Art Basel has grown a spine.

Hollywood-based artist and wildlife photographer Lloyd Goradesky is bringing back his floating Gator In the Bay project to the premier art bonanza this year.

This time it's even bigger with a body and tail that expands the steel gator to approximately 300 feet.

"We've worked out the kinks, not that there were many kinks along the way, but once you build something twice, you become an expert," said Goradesky as he watched crew members assembled the 30,000-plus pounds of steel into the shape of an alligator.

Before reaching Art Basel, the gator will be receiving Fort Lauderdale's key to the city on Dec. 1 at a ceremony in downtown on the New River. The following day, it will maneuver its way through the downtown area along the river and then down the Intracoastal Waterway before hitting its final destination in Biscayne Bay.

To create the rest of the gator's body, the artist is adding 104 4-by-8 floating tiles to the head, which navigates down the waterway via a self-propelled barge.

A close inspection of the tiles reveals thumbnails of approximately 83,000 wildlife photographs Goradesky shot over the years. "It's been my life's library," he said.

From a distance,the thumbnails resemble the scales of an alligator.

Roberto Theyson, of V&M Erectors, was in charged once again this year of all the steelwork.

Erecting a giant-size alligator out of steel was a far departure from his regular job of building bridges, he said.

"It's hard because it's something that's never been done before, so you invent things as you go along," Theyson said. "You have to do whatever it takes to get it to float and get it down there."

The main goal of the project is to draw attention to the Everglades' fragile ecosystem and restoration efforts. The Discovery Channel is expected to air a story about the project later in December.

After last year's Art Basel, Goradesky he was invited by numerous schools and groups to take the alligator on tour and to lecture about the Everglades.

"The feedback that I have received has been the most fun because the goal is to bring Everglades awareness, and the kids really want to know," he said.

The project is funded primarily through donor contributions, in-kind donations and the group's own pockets. Goradesky is currently also selling individual tiles (prices go up once the project sets sail).

Between Dec. 4 and Dec. 8, visitors can view the gator at the Miami Yacht Club at Watson Island, where it will be docked each night for viewing parties. During daylight hours, the gator will float around the Biscayne Bay area in no particular direction.

The gator will return to Fort Lauderdale on Dec. 14 to take part in the Seminole Hard Rock Winterfest Boat Parade.

To read more about the project, and to learn how to purchase a floating tile, visit GatorInTheBay.com

PHOTO GALLERY
Gator In The Bay 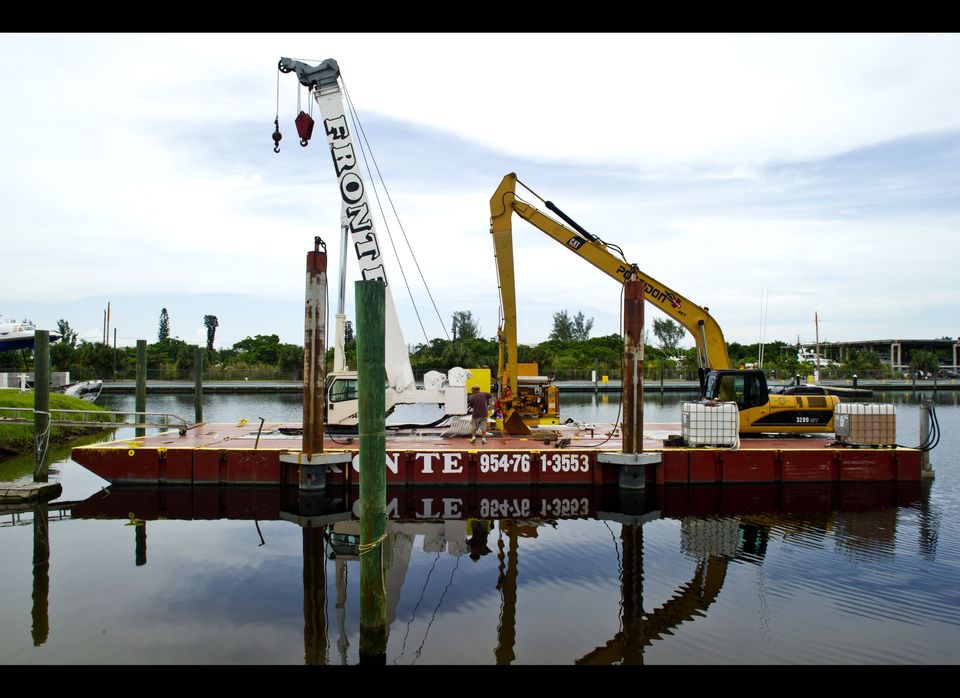 1 / 8
The barge that will serve as the gator's head, complete with a mouth that opens and closes.