I have always had a general disdain for New Year's resolutions. In my opinion, anything worth doing -- whether it's exercising, saving money, or eating healthy -- should be a priority year-round and not cheapened to the level of a popular schtick to be abandoned by February.

And yet, while perusing one of my favorite blogs, I came across the notion of "Dry January." Something in me lit up at the idea. Certainly, I would not give up my boozy, barhopping ways for good, but no alcohol for just one month? Not a bad idea considering I had just made it through a holiday season marked by bouts of overeating, drinking, and general laziness.

Abstaining from alcohol in January certainly helped me detoxify and start the year feeling rejuvenated. I did not, however, expect one of the biggest benefits of not drinking for an entire month: More money in my bank account.

The Financial Benefits of Giving Up Alcohol

Have you ever stopped to consider how much money you spend on alcohol throughout the week? Obviously, if you don't drink, you're ahead of the game. However, even infrequent drinking can have a significant, long-term financial impact.

As a person with a family history, I've always enforced rules around my alcohol consumption to ensure it remains moderate, like not drinking on weekdays or having iced teas instead of cocktails when dining out. Even so, one Friday evening out at the bars, including round-trip taxi fare (and most likely some late-night pizza) can easily turn into a $100 night.

In fact, according to an August 2012 report from the U.S. Bureau of Labor Statistics, Americans spend about 1 percent of their income on alcohol alone each year. For a person who takes home $50,000 annually, we can expect them to spend about $500 on booze. Of course, some spend less, and some of us, who will remain unnamed, spend a bit more.

So for anyone in need of some financial relief, it may be time to exchange the wine glass for a water bottle -- at least temporarily -- as there are a number of financial benefits to be enjoyed by giving up drinking. 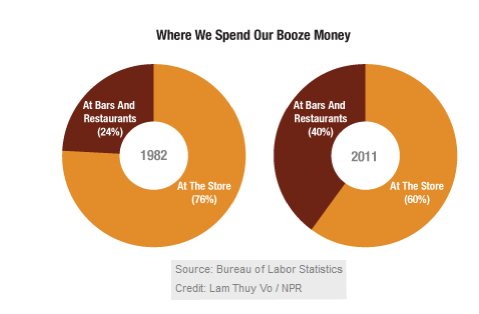 That means we're all dropping cash on significantly overpriced alcohol. Do you feel a little silly for spending so much extra money? Quitting drinking will eliminate that expense and any subsequent shame.

Sure, you can sit at home and drink alcohol at a minimal cost, but most people like to go out and drink socially every now and then. Unfortunately, that means being exposed to a number of additional costs beyond just the alcohol itself, such as transportation, cover charges at bars and clubs, and food that's consumed when one's inhibitions are at their lowest.

By giving up drinking, you become your own full-time designated driver, are less inclined to spend time at bars, and would rather be sleeping than eating a cheeseburger at two in the morning. All of this adds up to big savings (and a bonus smaller waistline).

Alcohol can really put a damper on energy and productivity. One of my favorite things about not drinking in January was waking up every weekend feeling refreshed (i.e., without a headache) and ready to tackle the day.

How does this translate to saving money? Personal finance and life coaching expert Colin Drake told me: "Having energy is a vital component of financial success... the biggest financial cost of drinking is the opportunity cost -- the lost business and productivity. It's hard to quantify, but serious nonetheless."

Blogger Jim Wang of Bargaineering.com agrees, "Even when I just had a glass of wine at dinner or a beer after work, I found that it had an effect on my sleep." After cutting out alcohol from his evening routine, he found that he would woke up far more alert. Wang adds, "As a self-employed person, all of my compensation is based on what I do each day, so being more alert and attentive meant I was able to get more accomplished."

The U.S. Centers for Disease Control and Prevention found that in 2006 (the last year full data was available), the cost of excessive alcohol consumption in the United States reached $223.5 billion. Interestingly, the study found 72 percent of these costs were the result of lost workplace productivity. Direct health costs accounted for 11 percent, law enforcement expenses made up 9 percent, and the last 6 percent went to motor vehicle accidents.

Lisa Hirschkorn, who works as an insurance broker, also explained those who drink regularly, especially those who verge on excessively "can have elevated liver enzymes that result in increased pricing for life insurance." Hirschkorn also notes that any DUIs on your record will result in "double and triple the cost of life insurance," or even the inability to be granted a policy. Similar repercussions can be expected if you're trying to get health insurance as well.

Aside from the obvious health and financial merits, a huge benefit to avoiding alcohol is learning to be interesting and enjoy life without any social lubricant. This one doesn't really apply in my situation, as I spent the majority of January on my couch streaming movies over Netflix, but I have to imagine it works well for those who have chosen to remain alcohol-free long-term.

When you're struggling to save money, pay off debt, or simply stop living paycheck-to-paycheck, alcohol is an expense that can easily be eliminated for added savings and a slew of other positive repercussions. So if you're not going to give up alcohol for your health, consider a break from drinking for financial reasons. And since it's now February, if you have any questions, I'll be at the bar.